Rain Taxi invites you to meet internationally bestselling journalist and writer Åsne Seierstad, the acclaimed Norwegian journalist whose The Bookseller of Kabul was an international best-seller in the early 2000s, and whose most recent book, One of Us, was selected by the New York Times as one of their top ten of 2015. Seierstad will be discussing her brand new book Two Sisters: A Father, His Daughters, and Their Journey into the Syrian Jihad. In this riveting new work of literary reportage, Seierstad tells the story of two teenage Somali-Norwegian sisters who, in late 2013, left their family behind in Norway to join the Islamic State in Syria. Seierstad traces the sisters' journey, but she also tells their parents' story, as they attempt to bring the girls home and then struggle to accept that they may be gone forever. Books will be available for purchase. Don’t miss this chance to meet one of Norway’s pre-eminent writers of nonfiction!

At this special event, Åsne Seierstad will be in conversation about her book with Fred de Sam Lazaro, executive director of the Under-Told Stories Project at the University of St. Thomas and a correspondent for PBS NewsHour. Fred has reported from 68 countries, focused primarily on issues related to poverty that are under-reported in mainstream U.S. media. Learn more about the Under-Told Stories Project HERE.

This is a ticketed event. Advance ticket sales have ended. You can still purchase tickets at the door ($5 each)—doors open at 6:30pm. All are welcome!

About the Book, Two Sisters:

Two Sisters, by the international bestselling author Åsne Seierstad, tells the unforgettable story of a family divided by faith.
Sadiq and Sara, Somali immigrants raising a family in Norway, one day discover that their teenage daughters Leila and Ayan have vanished—and are en route to Syria to aid the Islamic State. Seierstad’s riveting account traces the sisters’ journey from secular, social democratic Norway to the front lines of the war in Syria, and follows Sadiq’s harrowing attempt to find them. 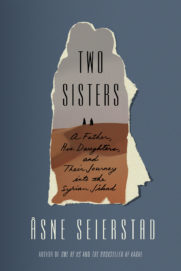 Employing the same mastery of narrative suspense she brought to The Bookseller of Kabul and One of Us, Seierstad puts the problem of radicalization into painfully human terms, using instant messages and other primary sources to reconstruct a family’s crisis from the inside. Eventually, she takes us into the hellscape of the Syrian civil war, as Sadiq risks his life in pursuit of his daughters, refusing to let them disappear into the maelstrom—even after they marry ISIS fighters. Two Sisters is a relentless thriller and a feat of reporting with profound lessons about belief, extremism, and the meaning of devotion.

Åsne Seierstad decided to write Two Sisters after the girls’ father approached her about the idea. Sadiq was engaged in an effort to bring his daughters home, and to spread their story as widely as he could. (He also contacted filmmakers, who turned the story into a documentary, as well). As Seierstad writes in her author's note at the end of the book, Sadiq "was seeking better cooperation among parents, schools, mosques, and the police," and wanted to prevent this from happening to other families.

The first thing that Seierstad did was to interview the family. Sadiq and his wife Sara also gave Seierstad access to materials that their daughters left behind, as well as invited Seierstad into their home in Norway, and to Hargeisa in Somaliland. During the course of working on the book, Seierstad traveled with Sadiq to Hatay Province in Turkey, across the border from Syria. Sadiq and Sara read the finished manuscript before publication, and were given the opportunity to make corrections.

The result is a careful work of journalism that avoids heavy-handed moralizing or easy answers. It doesn’t pretend to tell a story that's representative of any one culture, but rather tries to document this single family's extraordinary story, and to shed some light on the recent history of ISIS, the experiences of immigrants in Europe, and the process of radicalization.

Åsne Seierstad is an award-winning Norwegian journalist and writer known for her work as a war correspondent. She is the author of One of Us: The Story of a Massacre in Norway—and Its Aftermath, The Bookseller of Kabul, One Hundred and One Days: A Baghdad Journal, Angel of Grozny: Orphans of a Forgotten War, and With Their Backs to the World: Portraits of Serbia. She lives in Oslo, Norway.

“The book attains an almost unbearable weight . . . From the opening pages it has an irresistible force.” —Eric Schlosser, The New York Times Book Review

“One of Us reads like a true crime novel, but it has the journalistic chops to back it up . . . Not only a stunning achievement in journalism, it’s a touchstone on how to write about tragedy with detail, honesty, and compassion.” —Samantha Edwards, The A.V. Club

“I’d be lying if I said I didn’t read the first half of One of Us with perpetually moist cheeks . . . If it is true, as Stephen Jay Gould contended, that ‘nothing matches the holiness and fascination of accurate and intricate detail,’ then Ms. Seierstad has delivered a holy volume indeed.” —Dwight Garner, The New York Times

“A brilliant if unrelenting piece of reportage, one that cements Seierstad as among the foremost journalists or our time.” —Oliver Poole, The Independent

“[One of Us is] a new In Cold Blood, an essential read.” —Heather Mallick, Toronto Star