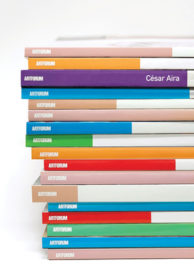 Artforum, the newest work by César Aira to be published in the U.S., is one of the most fascinating experiences in modern literature. A novel that synthesizes surrealism, pseudo-memoir, philosophy, and theater into the compact space of eighty-two pages, it somehow still retains the fluttery and playful tone that makes this book so enjoyable to read.

The events of Artforum take place over the course of thirty years and chronicle the experiences of an unnamed narrator who spends an unconscionable amount of time searching for copies of various art magazines—his favorite being Artforum. Structurally, the narrative is written in small, self-contained episodes, reminiscent of Borges and Sarraute. These episodes usually begin with an eccentric story, are interspersed with increasingly long philosophical asides, and culminate in a Joycean epiphany, after which follows a monologue reflecting upon the events and their deepest aesthetic meanings. The philosophical content in these stories cannot be understated, and very often Aira arrives at beautifully articulated conclusions. For instance, in one of the later episodes, he sums up: “And there was a marginal benefit that immediately attained a towering centrality: time. The time I had lost waiting would be transmuted into time gained: the time of creation.”

Artforum engages with important problems of consciousness through the lens of obsession; in so doing, Aira legitimizes the work of the artist in the modern world. This is not to say that the novel is in any way autobiographical. The narrator is supremely fictional, but assumes the role of an alter-ego to justify his voice as a beacon towards all creatives in the world today. The novel attempts to justify art as necessity, and succeeds remarkably.

Despite the common representation of Aira—perpetuated by himself, most of all—as a hyper-prolific writer, his prose is, at least in translation, extremely clear and vivacious. Where Borges gives us cold, stark, and unsympathetic voices of the infinite, Aira brings the ecstatic clarity of humanity. In this approach, there is a certain semblance to Walt Whitman, and in many ways, Aira is very comparable to the master poet, especially in their shared espousal of the self.

Artforum is an absolutely unique novel, one chracterized by the sheer beauty of its poetic voice, which needs no justification other than its own existence. Although Aira may never be fully appreciated as a literary writer due to his prolific output and his penchant for short texts, this slim novel is just as necessary as many of the other longer and more acclaimed novels by his international contemporaries.