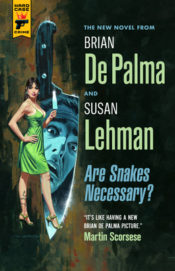 Co-written with Susan Lehman, a former editor at The New York Times, Brian De Palma's debut novel, Are Snakes Necessary?, is a fascinating exercise in genre—a minor work by a major cultural voice.

De Palma has always been an obsessive stylist. His cinema pulls viewers through intricate long takes and plot machinations with a classical understanding of suspense. And he's always been fascinated with pulp fiction. Are Snakes Necessary? is pure pulp, with the trappings of political thriller. It's stupid, and as with some of the bad novels of Bret Easton Ellis, stupid is the message.

Are Snakes Necessary? follows the story of a fixer working for a womanizing Senator. There are plenty of clichés, with snarling casino magnates and icy blondes, and more than a few De Palma flourishes as well, such as a photographer sniffing out intrigue on the set of a remake of Vertigo. The style is bare, taking on some of the cadence of The West Wing or a Tom Clancy thriller, but there are also certain strange additions, including a subplot with a rural “Dear Abby” character.

De Palma is often mistakenly criticized for the content of his films: a film about pornography is called pornographic, a movie about rape during the Vietnam War is called misogynistic. Most recently De Palma made a film about the manufactured idea of international terrorism, and it was drubbed as anti-Muslim. Generally, it's been said that he suffers from the curse of people liking his movies for the wrong reasons—Scarface, a film about the shortcomings of the American dream more than a gangster flick, being the obvious example—and surely some people dislike his films for the wrong reasons as well.

Likewise, De Palma twists genres to catch moments of realness. He deconstructs war pictures in Casualties of War, for example, about the kidnapping and rape of a young woman by American troops in Vietnam. He later revisited this material in Redacted; both pictures reject American militarism, and highlight the violence and venality of military occupation.

The realness of Are Snakes Necessary? comes out in overwhelming cynicism. As more “my years at the White House” books emerge from the past two administrations, it only becomes clearer how self-serious the public workers of the executive branch hold themselves to be—and that this self-seriousness, this acting, is also a violence wrought upon the public.

While De Palma has proven to be capable of epic work in cinema, Are Snakes Necessary? is not exactly another symphony—it's an exercise, a late quartet. But it's quick, and it’s fun. So don't take it too seriously.