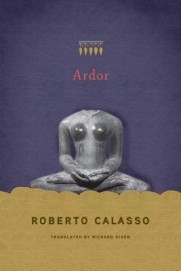 Reading Roberto Calasso's Ardor is a little like reading The Lord of the Rings, but from the inside out. Rather than introducing us to a cast of characters whom we accompany through fantastical landscapes full of adventure, mystery, conflict, and occult lore, Calasso draws us directly into a bizarre network of complicated rituals, mythological characters, and metaphysical enigmas—all of which, according to the body of literature he's dealing with, are merely different means of describing how the mind and the cosmos interrelate.

Calasso’s source material is The Vedas, a collection of pre-Hindu teachings that were brought to Northern India from central Asia during the Late Bronze Age. "It was the golden age of ritualists," Calasso tells us and a little further along in the narrative he elaborates. The Vedic world, he writes,

involved a cult, closely bound up with texts of extreme complexity, and an intoxicating plant. A state of awareness became the pivot around which turned thousands and thousands of meticulously codified ritual acts. A mythology, as well as the boldest speculation, arose out of the fateful and dramatic encounter between a liturgy and rapture.

This is a daunting assortment of material to try to wend into a single prose narrative. It's made more difficult still by the fact that the mythological component of Vedic lore, unlike that of the Greeks, remained subservient to its more esoteric and metaphysical sides.

Calasso wisely reserves extended comment on those headier elements until he's familiarized us with a more concrete aspect of the Vedic world—the sacrifice. The Vedic sacrifice was "an attempt to redress a balance that had been upset and violated forever," when humans developed the technology to kill and eat other animals. Calasso suggests, however, that the sacrifice was not a means of expiating guilt; rather, it was designed to exalt the act of killing and eating. The sacrificial ritual underscored the "fact" that the sacrificial creature willingly submitted to the event. No one actually believed this, in Calasso's view, yet the fiction was essential, for "to carry out a gesture in that direction . . . is the supreme effort granted to thought, granted to action, where we come face to face with the irreconcilable."

And the sacrifice can take several forms: sometimes it seems to be an intellectual dispute, at other times merely the pouring of a few tablespoons of fresh milk on a carefully laid household fire to the accompaniment of ritual verses, some of them intentionally mumbled, others spoken aloud.

Reader may find it difficult to keep their bearings when thrown into such a hodgepodge of arcane assertions, digressions, elaborations, and asides. But to those who have read and enjoyed Calasso's previous books, this method of criss-crossing the landscape of a foreign time and culture will be familiar.

For example, at one point Calasso gives us an extended critique of the Vedic solution to the question: Why is it true that man should not be naked in the presence of the cow? He informs us how, in Vedic lore, the four phases of a household fire—first lit, burning, blazing, and reduced to embers—correspond to the divine forms Rudra, Varuna, Indra, and Mitra. He spends a few pages examining Vedic instructions for selecting a tree from which to fashion a post to which the sacrificial victim will be tied. It wouldn't do to select a tree from the near edge of the forest—too obvious—and it would also be uncouth to choose one from the nether side. No, the tree must be the nearest among the far, the farthest among the near.

After a review of the elaborate Vedic instructions on how long the sacrificial post must be, Calasso offers a typically grandiose gloss: "Here we see two fundamental impulses of brahminic thought brought together: the exasperating mania for exhaustive classification on the one hand; and the underlying willingness to recognize an immensity that overwhelms everything and can be felt everywhere."

As we proceed further into the mire of Vedic ritual and wisdom, sustained at times only by Calasso's sterling prose, the immensities multiply. In part, this is because in India, as opposed to the West, "mind" was elevated to a position above speech. That being the case, the words we use to describe the great mysteries of our own existence are likely to be inadequate to the task. Soon we're struggling, with Calasso as our guide, to make sense of a notion such as asat—the unmanifest. It's a sort of non-being that nevertheless corresponds in some way with praha (the vital breaths) and acts through the practice of tapas, a striving that overheats consciousness. Such tapas is the "ardor" of the book's title. As Calasso puts it bluntly, "too many palpable elements are attributed to this nonbeing."

In a later chapter, Calasso goes further, exploring the interrelationships described in various Vedic hymns between such closely related notions as the Self (ātman), the "I" (aham), awareness (citta), intention (saṃkalpa), knowledge (veda), meditation (dhyana), and discernment (vijñāna). This is only a sampling of the many conditions, mental states, and ontological categories involved, though Calasso keeps the narrative thread alive by introducing them one after another within the context of a ritual dialogue between Sanatkumāra and his pupil, Nārada. Along the way he offers brief references to Parmenides, Schopenhauer, Kafka, and Ignatius of Loyola, among other thinkers, to clarify similarities and (more often) differences between Vedic and Western concepts. A good deal is at stake here, because, at least according to Calasso, "the primacy of awareness over everything is the cornerstone of Vedic thought."

Calasso is occasionally forced to admit his own perplexity, as in the case of the emptiness (ābhu) in which the One that was born out of nothing was clad. In his efforts to gather material to illuminate such concepts (or articles of dress), he often refers to the views of Vedic scholars that few readers are likely to have heard of—men like Renou, Eggeling, and Geldner. On other occasions Calasso will single out a scholar only to emphasize how wrong-headed the man's theories are. Frits Staal, for example, comes in for extended criticism for advancing the notion that in order to appraise the Vedas accurately, we need to rid ourselves of the notion that they actually mean anything.

It's clear from Ardor that the Vedas mean many things, which perhaps come together in the "awareness" required to successfully perform the "sacrifice." But as usual, things aren't really that simple. At one point Calasso describes the underlying presumption of the sacrifice as follows: "Truth is an unnatural state for man. Man enters such a state only through the artificiality of the vow and the long sequence of actions (rites) connected to it. But he cannot remain there."

The idea that a ritual sacrifice could be truth is largely alien to post-Christian Western thought, and it seems unlikely that Calasso himself believes life's challenges can be reduced to the task of properly sprinkling clarified butter onto a campfire. All the same, it's a pleasure to follow the peculiar and refreshing lines of reasoning that follow from that notion. There are enough tidbits of both esoteric wisdom and anthropological insight on any given page of Ardor to keep us moving ahead. If the cumulative weight of such nuggets becomes onerous, it might be useful to know that the various chapters of Ardor, with titles such as "The Flight of the Black Antelope," "Vedic Erotica," and "Hermits in the Forest," aren't elaborations of a single unfolding theme, but largely independent essays on a variety of related subjects.

In the end, Ardor possesses all the qualities that readers have come to admire in Calasso's work. At one point he writes, "The Vedic seers regarded the passage of the mind from one thought to the next, and its ever deeper immersion into the same thought, as the model for every journey." Ardor describes a journey deep into the heart of Indo-European civilization, and with Calasso as our guide, it's a journey well worth taking.