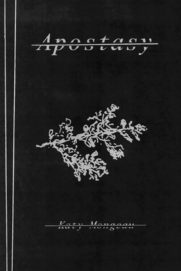 In Apostasy, Katy Mongeau’s lyric “I” is a miscreant in search of redemption. These two long poems read like narratives suspended over a tense allurement between wish-fulfillment and nightmare:

You came to me with your hands all bloody.
You said you killed
the woman as if I’d shriek in delight.
Then you stuck one finger inside of me
like you were looking for a pulse.

At times, one suspects the murdered woman exists as resurrection, the rebirth of the narrator’s vengeful eroticism. Yet elsewhere, the narrator and murderer become as indiscernible as the “black birds” and “black flies” on the collection’s opening page. Apostasy has affinities with Baudelaire’s Les Fleurs du Mal, particularly in how it derives a pleasurable, sublime experience from the body’s abjectness, and even its destruction. Mongeau’s poems jolt us with similar shockwaves erected upon murder, sliced flesh, and the orgasmic satisfaction that emerges from defilement: “I wanted /what I tried / to denounce.”

So death opens into the sacred and the possibility of inconceivable meaning; the latter returns to sentience in the form of arresting gratification. Mongeau’s poems traverse this delicate three-fold movement as transcendent value emerges through death, and only then is our materiality validated through pleasure. Here is how the poet puts it:

When you murdered me, I called it apostasy.

I think so highly of death—You once thought
so highly of me. It is no coincidence: a bouquet
of dried thistle and bluets, fake and flame retar-
dant, and all the other falsities damning me.

Evident throughout the book, the imbalance of control between “he” and “she” is inextricable from issues of consent. The narrator seems to validate and seek precisely what will wound them, but there is also an acknowledgement of sacrifice: “You wouldn’t believe what / I cost myself.”

Apostasy is a difficult collection to read, precisely for its ability to trouble ethical boundaries and shock one into considering unexpected psychic spaces of self-mutilation. For some, this jump might lead to problematic questions around metaphorical and symbolic linguistic use. For instance, when Mongeau writes that “I carried her flesh as my flesh / in the way that rape is a daisy chain,” aesthetics seek to overturn the violence of the act; the pleasant sonic and imagistic configuration of “daisy chain” causes one to recoil from the word “rape” exponentially more. But, does it though? The work gets tricky in these places, and perhaps the point is to unsettle. Hence, a final question remains—is Mongeau’s debut collection a revival of the neo-decadent lyric? If you care to find out, one must risk danger, and generously gamble with the prospect of finishing the book a bit more scabbed and unholy, observant to the inscrutable carrion of our world.