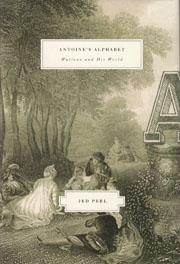 I have a fondness for books that employ alphabetical structures. In the best of them—Louis Zukofsky’s Bottom: On Shakespeare, Steve Katz’s Wier & Pouce, Walter Abish’s Alphabetical Africa, among others—the alphabet isn’t simply a paint-by-number for arranging random thoughts, but alloys with the content to create unexpectedly strong effects. Jed Perl’s study of the art of Antoine Watteau (1684–1721) exhibits such strengths.

In his introduction, Perl writes of Watteau as something of a sheepish pleasure: he knows that others, even his friends, see Watteau as sentimental, samplerish, and wonder at his passion for all things Watteau, including a collection of his mechanically produced black and white prints. But Perl sees Watteau as a master of “silken surfaces and fleeting emotions,” and his writing here seeks to communicate why this matters. He makes his points thoughtfully rather than with a ham-fist, and so, like the best of confidence men, draws us into his ideas under our own power.

Some letters have a single entry, some multiple entries; some are very short, some pages long. Perl gives each a stand-alone integrity, and allows us to connect them as we wish. He perhaps tries a little too hard to achieve a tone of conclusion at the end of each section, which can produce a slightly cloying feel, as at the end of G, “Gersaint’s Shopsign”: “And here he is, reaching out his hand to this woman who is among the last women in Watteau’s art whom we will see from behind. And he invites her to join him in the dance of life, dancing oh so slowly, as the world passes by.” (79) But this urge to complete an emotional circle is a weakness he shares with Watteau, and so oddly reinforces the subject matter even as it prompts the book’s only weak writing.

The intention here is the usual for a thoughtful critic: to alter our perception of art we think we know well—in this case Watteau’s sentimental scenes in rococo pastoral settings, tableaux which now strike many of us as stiff and artificial—through a kind of gentle deconstruction of givens and a shell game of substitutions. Once Perl has opened gaps in what we thought we knew he inserts views of other artists and writers, of giants and knowns, and of friends’ zigzag arguments across a restaurant table. This approach, a kind of stereopticon of thought, is of course a staple of criticism, but Perl’s pieces are chosen with such care that he surprises and convinces again and again.

Perl himself provides a visual aid that illustrates this effect well and whimsically, when he tells us (at T, “Transformation”) how he once found a reproduction of Gilles, Watteau’s melancholy clown, that turned out to be

an advertising card for Chocolat Guérin-Boutron . . . in the form known as a transformation, constructed of two pieces of printed paper, one of which slides over the other, in such a way that when you first look at the card with its black-and-white reproduction and green type and curving, slightly Art Nouveau edges, you see a reproduction of Gilles—only to find, when you push the paper tab upward, that Gilles is overtaken by a portrait of Watteau.

Perl offers a number of ideas, some conventionally spun out of common notions about the unique sensibility of an artist, while others compare not so much Watteau’s style as his feel for the world with other artists (Beardsley, Cézanne—and why not Rousseau, whose artificial utopias in writhing foliage make him a very close cousin?). But, more compellingly, there are other overarching themes that appear, vanish, and reappear, with theme-and-variation changes of hue and saturation. One particularly interesting and persuasive theme offers a number of mechanical images—drawn from Watteau’s time—when mechanics were primarily executed through wood and wire, string and hinges, in imitation of the workings of the human body. Perl begins seeding the clouds for this theme in the first pages of his Introduction: he writes of a figure in one of Watteau’s paintings that it “is a splendidly absurd mechanism dedicated to the idea of human feeling.” Later, at K, “Kleist,” the marionette returns, as a symbol of spiritual purity. Perl walks us through the steps that led Kleist to embrace this paradox. He had a conversation with a dancer who was watching a marionette show, and the dancer explained that for him the puppets had an extraordinary grace,

And this grace, strangely enough, derived from the mechanics of the puppetry, from the extent to which the puppeteer, by holding and moving the strings, gave the dancing wooden limbs a powerful inevitability—a center of gravity, a geometric elegance. Somehow, the artificiality of the marionette's movements, entirely controlled by a few strings, mostly in fact by one central string, suggested a dance stripped of all the self-consciousness and egotism that absorbed the human dancer.

Perl sees Watteau’s figures as being possessed of this same grace, because he was able to “break with the representational image, so that his sketchbooks finally became a sort of improvised anatomy from which he carpentered these figures that amount to wonderful theatrical toys.” And so Kleist’s and Perl’s logic leads us inexorably to the conclusion that Watteau’s carpentered figures are full of grace.

But what of Perl’s own carpentered, improvised figure—this book? Can a writer be (as Perl describes such moments in daily life) “quite simply, transparently there?” I think this is why he chose the alphabetic structure: in another seeming paradox, its artificiality allows him to be very much present with minimal self-consciousness, and this gives the book an underlying strength. In the end, Perl’s book is yet another “splendidly absurd mechanism dedicated to the idea of human feeling,” like his beloved subject’s work.