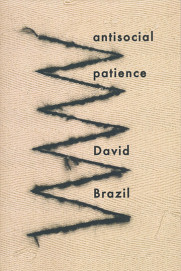 Over the last few years David Brazil has published two chapbooks of poems titled Holy Ghost. His last book, The Ordinary (Compline, 2013), concluded with a number of poems on, among other things, “the jew” vis-à-vis an upstart Christendom. Although Antisocial Patience is, in many respects, an extension of these previous works, it does not feature the multimedia collages and appropriated detritus of quotidian urbanity that marked much of The Ordinary. Instead, Antisocial Patience is, more narrowly, a series of meditations on the dilemma of works and grace, praxis and chance, for the “defeated” but righteous crusader-cum-activist.

John Milton raised this problem in a different, albeit related, context after his vision was seemingly “defeated” by his eyes. At the turning point of the well-known sonnet “On His Blindness,” Milton, wondering how God expected him to do the Lord’s “work” after the loss of his eyesight, writes,

But Patience, to prevent
That murmur, soon replies: "God doth not need
Either man's work or his own gifts: who best
Bear his mild yoke, they serve him best. His state
Is kingly; thousands at his bidding speed
And post o'er land and ocean without rest:
They also serve who only stand and wait.

Allegorized, patience suspends disbelief, but if patience is also to be “personified” in one who is not part of the “thousands” who do God’s “bidding” by swarming “o’er land and ocean without rest,” how can one be “Patience” and Protestant at the same time? What are the proper stanzas—Donne’s “little rooms”—in and through which an ethos of protestation can engage the “social” by withdrawal from it? Is a stanza a nave or abbey only after its consecration by Luther’s theses? And is patience an analogue to or with (and the preposition matters) leftwing political “theory,” the condition(s) for the possibility of, social and political activism per Marx’s and Engels’ theses?

These are the questions at the center and margins of Antisocial Patience. In between is the music of stanzas, meted out in rounds of metrical and free verse singing at once sincere, parodic, bewildered, confident, angry, tender, etc. Brazil’s peripatetic poems, stanzas, and lines suggest neither patience nor protest but, rather, crusades without crusaders. Here is a soundtrack without a movie, songs of exhortation both demotic and stately. To these ends, Brazil turns scripture into script (though “what we strive for in this song is just exactly/ imprescriptible”), a template for our present circumstances and values which, separated by the very histories they unfold as, can only appear as outrageous (mis)fortune reified and/or rectified by wresting a future meaning-to-be from the tyranny of the meant.

Call it hope: the failures of social and political activism may be nurtured as the seedlings of “redemption” at some indeterminate time to come. Insofar as the “failed” Catholic but “successful” protester John Calvin is the “invisible hand” at work in these poems, the Jewish-Christian debate that closed The Ordinary is here supplemented, if not supplanted, by the Catholic-Protestant schism. This volatile divide functions as a “model” for state-enforcement of “the law” and citizen-activist resistance in the name of a “higher” law. Beginning with the given—a defeated, if heroic, left—Brazil ponders the remainder of “song,” of prosody, that both acknowledges and transcends defeat. Rejecting the commonplace narrative of the appropriation of the public by the private and the penetration of the private by the public—in brief, the problem of a “we” that does and does not speak for some (“compeers contra/ every cop who divvies up the/us into the getters and the gotten”) —Brazil rejects the temptation of a strict fundamentalist counternarrative (Marxist, religious, etc.). Instead, as a kind of negative capability or “patience,” he withdraws from the singularity of intent (stateless communism, heaven on earth) to “contemplate” plurality: any number of strategies and models for engagement must be reimagined (dead-ends entail forging new paths over or intersecting old ones) without—and with—institutionalization. This is, of course, as the epigraph makes clear, the position that Calvin took in the throes of his own personal crisis of faith. As Calvin knew, there is no refuge from the world or from The Church, a corporate body whose political, economic, and military power is the equivalent of a small nation: “a gunman in oikos & we” can always “prose us.” Brazil thus marks the constitution of Protestantism as a descant against (Anglican) London and (Catholic) Vatican cant—even as protest, suppressing its sectarian roots, towers into Protest, a twin of what was to be abandoned. The historical lessons to be derived from this relationship inform Antisocial Patience.

As the book’s title suggests, Brazil posits the world outside individual consciousness as the realm of "anti-patience," a world where one acts and interacts with others. Thus the hermetic tendencies within Calvinism, an index of its relation to Catholic monasticism, are redeployed here as revolutionary "timing"—when to act and when to wait. Yet patience is, at best, a double-edged sword; it can be a high-level strategy as well as a ceding to the world. The revolutionary's metaphysics rejects the world as is for what might be (“fuck the escape that abjures/ renunciation of the merely given as/ my opening move”), and this orientation towards a future entails “voluntary” exile from institutional structures, private and public. If the oikos is thus exposed as the originary wound—"In/the text of the rite is a cut/in cloth of sacrifice”—what remains is just the wound, a mouth from which pours song. Song, like the singer, marks and is marked by scarification: “the pith of hymns will/travel to your ears and/dwell there, doing its/small work as fate majestic/over earth decrees.” Yet, song obeys its own laws (metrics, for example) and acts upon its singers and listeners—as persuasion sans rhetoric—without or beyond the reach of a law that comes to supplement the oikos, an "echo" of the original even if "flaws in wind told. building it had failed." For want of a law, a metric, or a pattern, possibility appears as participial, a bridge between the present and future, delicate as a houseless (if not homeless) law, "fortified by song.”

Song is, of course, central to the Protestant rebellion: song and speech over and above the law, the house. But insofar as the activist seeks the secular equivalent of religious resistance, he or she remains haunted by what one had thought to have abandoned: “your law was my houses/your law settled time & now I’m/ cast to outer dark & crying/aloud for the echo, yes.” Calvin, torn between passive and active resistance, between works and grace, could not decide if it were more “holy” to enter the theater of war against the world (including a Catholicism reimagined as Babylon) or wait for God to avenge his martyrs (“Vengeance is mine,” saith the Lord, in Romans 12:19). Nonetheless, in the face of daily injustices, we as humans find it difficult to merely “serve and wait.” Waiting may lead to withdrawal from the world a la the monk and nun, exemplars of Catholic patience, while the activist nails thesis after thesis (Calvinist, Marxist, Islamist, etc.) to a door of the built, that which refuses to open to some (e.g., Levelers) and gapes way too wide for others (Babylon as the whore who refuses no one and nothing). This motif—refusing what ought to have been accepted, accepting what ought to have been refused—is never far from fin de siècle sensibilities. Brazil tries to sidestep this trap by accepting every encounter as “possibility” no matter how insignificant it might seem, and thus far this sensibility informs all his work. Rhetorically, Brazil deploys anagram (snow=nows), pun (“be my name write or be my name razed”), catachresis (“Rave, I’m homeroom, me”), and malapropos (“The past tense of seeing is seed”). Modalities dominate as Brazil gleefully uses, and abuses, inductive and deductive reasoning.

Antisocial Patience constitutes an homage to, and deconstruction of, Calvinist and Marxist doctrine. Brazil’s writing remains informed by a dialectical fin de un monde/debut de aussi monde sensibility, neither of which corresponds with a fin de siècle worldview (though they do overlap). As with much of contemporary poetry, Brazil’s lexicon can at times remain trapped within the private language of a coterie. Given the stakes, the risks he takes are perhaps unavoidable, but one cannot say that the risks are “worth” taking since such a rhetoric attaches a predetermined value to future labor, arresting possibility in advance. Contrarian at heart, Brazil imagines the risks of a patience even if, especially if, it is not worth it.