Join us in welcoming beloved and best-selling author Anne Fadiman to the Twin Cities! Renowned for her two scintillating essay collections, At Large and At Small and Ex Libris, as well as for her eye-opening and utterly engaging The Spirit Catches You and You Fall Down (winner of the National Book Critics Circle Award), Fadiman will present her new book, The Wine Lover’s Daughter (Farrar, Straus and Giroux). As Adam Gopnik puts it, “The ostensible object of Anne Fadiman’s wonderful new book is the wine cellar of her father, the once-omnipresent critic Clifton Fadiman. But its real subjects include the insecurities of American Jews, the glories of mid-century ‘middlebrow’ culture, and, above all, the always intricate, often exasperated, and finally deeply tender relation of father and daughter.” Refreshments will follow this not-to-be missed talk, and books will be available for purchase courtesy of Subtext Books. We hope to see you there!

This is a ticketed event. Advance ticket sales have ended. You can still purchase tickets at the door!

PRAISE FOR THE WINE LOVER’S DAUGHTER

“The Wine Lover's Daughter is a standout―possibly the best memoir, and one of the best books, this reviewer has read in 2017.”
―Library Journal (starred review) 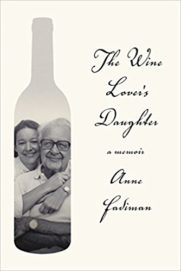 “If Anne Fadiman’s book about her father were a wine, it would merit a ‘100’ rating, along with all the oeno-superlatives: ‘smooth,’ ‘elegant,’ ‘brilliant,’ ‘with a dazzling, heart-warming finish.’ But as it is a book, let’s call it what it is: a stunning, original, beautifully written, clear-eyed yet tear-inducing account of a daughter’s love for her famous father; and into the bargain, the best family memoir yet to come out of the Baby Boom generation.”
—Christopher Buckley

“This book is as good and rich as one would hope, no small thing, given that it’s written by one of the best essayists of our time about her father, one of the more interesting critics of another. Uncork this book and watch one master go to work on another. I was reminded reading it of what the man himself once wrote about tasting a great vintage, that it was ‘to savor a droplet of the river of human history.’”
—John Jeremiah Sullivan

Anne Fadiman is an author, essayist, editor, and teacher. Her first book, The Spirit Catches You and You Fall Down, tells the story of an epileptic Hmong child and her family living in Merced, California. Fadiman's sensitive, incisive treatment of the unbreachable gulf between the Hmong and American medical systems won her a National Book Critics’ Circle Award. The Washington Post called the book “an intriguing, spirit-lifting, extraordinary exploration.” In 2009 it was chosen by the Young Adult Library Association as one of its recommended titles for all students (the list, which includes a number of adult titles, is revised every 5 years and used by educators and librarians across the country). Spirit is frequently chosen by colleges, libraries, and communities for First Year Experience and All Read programs. The book continues to be taught at universities both as literary journalism and as a casebook for cross-cultural sensitivity in general; it is also widely read by medical practitioners who wish to offer more effective care to patients from other cultures.

As the inaugural Francis Writer in Residence, Yale University’s first endowed appointment in nonfiction writing, Anne Fadiman serves as both a professor in the English department and a mentor to students considering careers in writing or editing.

Her best-selling essay collection Ex Libris: Confessions of a Common Reader is a book entirely about books — from purchasing them, to reading them, to handling them (turn monologues into dialogues by writing in the margins; pay no mind if you drop crumbs between the pages). The London Observer called Ex Libris “witty, enchanting, and supremely well-written.” It has been or will be translated into fifteen languages, including Korean and Catalan.

Fadiman’s most recent essay collection is At Large and At Small: Familiar Essays, in which she discloses her passions for (among other things) staying up late, reading Coleridge, drinking coffee, and ingesting large quantities of ice cream. The Christian Science Monitor called it “as close to a perfect book as you will ever hope to read.”

For seven years Anne Fadiman edited The American Scholar, the venerable literary quarterly, described by The New York Times as “an intellectual giant.” Her essays and articles have appeared in Harper's, The New Yorker, and The New York Times, among many other publications. She has won National Magazine Awards for both reporting and essays. She is the editor of both the 2003 edition of The Best American Essays and Rereadings: Seventeen Writers Revisit Books They Love. She helped edit, and wrote the introduction to, The Opposite of Loneliness, a bestselling collection of stories and essays by her late student Marina Keegan. In 2012 Anne Fadiman was awarded the Richard H. Brodhead Prize for Teaching Excellence from Yale University. In 2015 she was elected to the American Academy of Arts and Sciences.