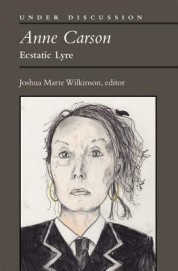 It’s high time that we had a book on Anne Carson, one of our most important and anomalous writers. Rather than collecting already-published pieces, editor Joshua Marie Wilkinson solicited “appreciations, readings, investigations, experiments, and performances” from a variety of writers, knowing that these “myriad approaches” would result in “overlap, digression, and strangeness.” The book opens with his fine introduction, and closes with a heretofore unpublished interview. In between, the order of the thirty-two short essays, when based on single works, is mostly chronological.

To witness the essayists essaying to get a grip is fascinating. But such a devious, multi-plied, multi-faceted, protean writer ultimately confounds. For one thing, as Bruce Beasley writes: “In Carson each eachness, each separable body interpenetrates, won’t stay apart. The academic and the unotherable ‘other’ of essay/novel/poem/translation overlap, their categories in a permanent state of error.” Furthermore, she incorporates the thoughts of many, and often abstruse, writers, thinkers, philosophers, mystics, and artists. There is always some degree of “intellectual intimidation,” as Douglas A. Martin admits, “feeling when reading her I must not be smart enough.” He speaks for all of us.

The book has several standouts. Timothy Liu offers gnomic short takes on various Short Talks. Of “The Anthropology of Water,” Jennifer K. Dick writes: “Carson’s reader simply must let go, flow under, breathe in the aquatic literary shifts, the pain of inhaling the impossible, of reaching across it into whatever connections emerge.” Harmony Holiday’s meditations on Autobiography of Red consist of pleasing, non-scholarly, language play. Discussing Decreation in a relatively straightforward manner, Cole Swensen is illuminating and effective. Julie Carr gets personal, telling how various Carson works help her to understand her own life, her mother, her grandmother, her pregnancies. Bianca Stone, the illustrator for Antigonick, makes many exact observations, including: “there is no pretension in Carson’s work.”

De gustibus and all that, but some of the other essays here are disappointing, if not disastrous. For one thing, while I like academic discourse and po-mo lit crit as much as the next nerd, it can be a screen, a refuge for one unequal to the task, and it results here in a number of pieces light on substance. Also, attempts to emulate Carson’s weirdness tend to fall flat; however absurd and randomizing some of her work may seem, there is always her powerful mind with its formidable learning behind it. Finally, several of these responses seem little more than hubristic—look at me, I’m taking on Anne Carson!

Lily Hoang on Red Doc> pleases with a word cloud (the volume’s only deviation from an otherwise conventional text), a personalized response, and an “appendix” of definitions of myth. She writes: “To talk about Anne Carson is to talk about myth. After all, she’s a classicist. . . . ” This, to my mind, signals the major problem with Ecstatic Lyre; I would amend Hoang’s remark to read, “Before all, she’s a classicist.” Neither coy nor arrogant, her short bio (“Anne Carson . . . teaches Ancient Greek for a living”) in Carsonian fashion cuts to the quick, maintaining that everything she writes consciously arises from the primordial muck of Greek literature. There is that aforementioned interpenetration, but also a definite and discernible point of origin.

Thus, with the essays on Carson’s fundamental translations of Sappho and the Greek tragedies deferred, this book is backwards, or upside-down. (Note that the editor, possibly with some ambivalence, classifies Antigonick as Carson’s work rather than Sophokles’.) Elizabeth Robinson undertakes Carson’s Sappho (whence comes—riding on the back of Modernism—Carson’s love of the fragment), but she lacks the hard-won understanding and immediacy of a translator, and she can’t get a handle. John Melillo, although similarly hobbled by his dependence on English, manages to be more successful with his focus on brackets, meter, sound, silence.

Is there a classical philologist in the house? Only one. In many ways, Erika Weiberg’s “Lessons in Grief and Corruption” is the best essay here. Similar to her subject, Weiberg bears her learning lightly, using it to get to the heart of the matter, and shows the intimate connection between Carson’s literary bedrock (Euripides in this case) and her modern concerns, especially linguistic:

In the process of translation, you realize what is strange about your native language . . . Carson creates this experience on the page, both in her poetry and in her translations; she gives the gift of sudden estrangement from the natural feel of English. . . . Suddenly the innocuous word you thought you knew slices sharp and exits through the other side of awareness.

In the interview with Peter Streckfus, Carson’s English is conspicuously refreshing, and clarifying. She likens her opera Decreation’s libretto, born from a lecture on Simone Weil, Marguerite Porete, and Sappho, to the “intoxicating fumes left in the room by mashing up all the grapes of the academic part.” Again, on the distinction between her analytical writing and her aesthetic writing (that interpenetration once more), she says: “I couldn’t separate the strands of it all. So, I gave up on it.”

Carson’s literary stature is one consequence of her volcanic work—she pushes, she blurs, she stuns with her brilliance, she challenges us to strive to comprehend. Her language, her point of view, is “refracted” through so many mediums. For the reader, flashes of sharp illumination are quickly overshadowed by bewilderment. Despite the inevitable dead ends and misreadings, Wilkinson’s collection is valiant and valuable for us enthusiasts. With Carson our reach always, or almost always, will exceed our grasp, but that has to be—and is—enough.