Sunday, May 5, 3:00 pm
Target Performance Hall at Open Book
1011 Washington Ave S, Minneapolis
FREE and open to the public!
Click Here to download a PDF poster for this event

RSVP HERE TO BE ENTERED IN OUR PRIZE RAFFLE:

for free tickets to the new film TOLKIEN on May 7 (and all attendees receive a free set of photo stills from the film!)

Join us for a conversation with one of Iceland’s
most acclaimed authors, co-presented
with our friends from Taste of Iceland.
RECEPTION TO FOLLOW
with awesome nibbles and drinks!

Described by Rebecca Solnit as “the love child of Chomsky and Lewis Carroll,” Icelandic author Andri Snær Magnason will appear in conversation with Rain Taxi editor Eric Lorberer to discuss his wide ranging work, which includes supermarket poetry, science fiction, writings for youth, and critical essays. Magnason is one of Iceland's leading literary voices — his novel LoveStar won Le Grand Prix de l’Imaginaire in France and a Philip K. Dick Citation of Excellence in the United States, and other works have garnered numerous awards and acclaim. His work has been translated into fourteen languages, and his latest book to appear in English translation is The Casket of Time, newly released by Restless Books. Magnason was the second runner-up in Iceland’s 2016 presidential election, and is currently the chairman of Reykjavík, Unesco City of Literature.

More about the book: 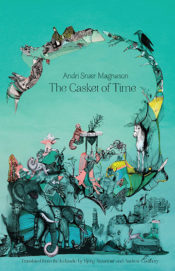 An entrancing adventure for today’s troubled planet, The Casket of Time is a fantastical tale of time travel and environmental calamity. While suitable for readers aged 10 and up, the book is "an intimate epic that floats effortlessly between genres as diverse as fairy tale and political commentary, science fiction and social realism” (Bjarke Ingels). The Casket of Time tells the story of teenage Sigrun, who is sick of all the apocalyptic news about the “situation” (and her parents’ obsession with it). Sigrun’s family—along with everyone else—decides to hibernate in their TimeBoxes®, hoping for someone else to fix the world’s problems, but when Sigrun’s TimeBox® opens too early, she discovers an abandoned city overrun by wilderness and joins a band of kids who are helping to fix the world. Translated from the Icelandic by Björg Arnadóttir and Andrew Cauthery, this is a riveting novel for our times!

“The power of story animates a tale that communicates—but is not overpowered by—urgent messages.” —Kirkus Reviews

More about the author:

Andri Snær Magnason has written novels, poetry, plays, short stories, essays, and films. His children’s book The Story of the Blue Planet was the first children’s book to receive the Icelandic Literary Award and has been published or performed in 35 countries; it also received the Janusz Korczak Honorary Award in Poland 2000. Magnason has been active in the fight for preserving the environment in Iceland. His book Dreamland: A Self Help Manual for a Frightened Nation has sold more than 20,000 copies in Iceland, and he co directed a feature-length documentary film based on the book. His most recent book, The Casket of Time, has now been published in about 10 languages and was nominated as the best fantasy book in Finland 2016, along with books by Ursula K. Le Guin and David Mitchell. He lives in Reykjavík with his wife Margrét, four children, and a dog.