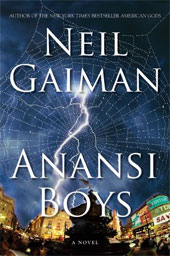 Neil Gaiman is a human repository of stories. Or is he? Human, I mean. He seems to know an awful lot about gods throughout time and cultures. And he knows all their stories. But what sets Gaiman apart from any run-of-the-mill deity is his distinct understanding of human foibles and strengths as well as those of the gods. We are all made of the same stuff, after all.

Gaiman crafts his newest novel, Anansi Boys, with the deftness of a spider weaving a web, luring the reader deeper and deeper into the story until she is simply stuck and helpless against its masterful humor and fun. The story follows the hapless Fat Charlie Nancy whose life, it seems, consisted of one embarrassment after another due to the shenanigans of his dapper old dad. But after distancing himself from his father and his Florida backwater upbringing, Fat Charlie looks forward to a future life without incident or embarrassment, accompanied by his lovely fiancé Rose. Unfortunately, this is not to be, for Fat Charlie’s father isn’t done with him yet—he has the audacity to die, starting a series of misadventures resulting in Fat Charlie learning two very important facts: one, he has a brother he never knew about and two, his father is a god.

The narrator of Anansi Boys intertwines this story with the ancient legends of Anansi, the titular Spider God of African legend, who is also Fat Charlie’s father. Falling into an easy Caribbean story-telling dialect, the narrator follows the crazy antics of Anansi as he pursues the pleasures of food, wine, women, and song. Anansi is as greedy as he is clever, and as funny as he is handsome. His pleasures may be sacrificed for the fun of the story, but he always gets his way. Gaiman often plumbs the rich archives of creation myths and folktales for his own stories, but his profound grasp of the human element brings these stories into the modern age, adding sophistication, wit, and irony to the mix. Gaiman takes the bare bones of these myths and applies them to rounded characters who change and hopefully grow a little from their experiences.

Although Fat Charlie discovers he is the son of Anansi, he has no powers, or so he thinks—not even the basic human ones of self-confidence. He is powerless with his own name: he hated being called Fat Charlie, but the name “clung to him, like chewing gum to the sole of a tennis shoe.” It was a name his father bestowed upon him, and the name dogged him no matter how often he moved or tried to re-invent himself. As Anansi says, “People take on the shapes of the songs and the stories that surround them, especially if they don’t have their own song.” When Fat Charlie meets his brother, Spider, he finds out where all the talent in the family had gone. Spider has all the power. He’s handsome and charming, and Fat Charlie pales in comparison. But this kind of power breeds a dangerous detachment:

A god’s relationship to the world, even a world in which he was walking, was about as emotionally connected as that of a computer gamer playing with knowledge of the overall shape of the game and armed with a complete set of cheat codes.

Spider just uses people and moves on. With trademark wit, Gaiman puts it this way: “It was not that he was feckless, more that he had simply not been around the day they handed out feck.” Soon, Spider takes over Fat Charlie’s life, impersonating him at work and, worse, with his fiancé, to disastrous results. This seemingly small power struggle soon takes on god-like proportions. Without any confidence or sense of his own power, Fat Charlie relies on the gods to sort things out and unknowingly taps into an age-old struggle between Anansi and Tiger, a battle between gods that goes back to the beginnings of time. But despite the twists and turns of this twisty turny plot, Fat Charlie begins to discover his own strengths and how he fits into the story:

Stories are webs, interconnected strand to strand, and you follow each story to the center, because the center is the end. Each person is a strand of story.

Poet Muriel Rukeyser put it another way: “The world is made up of stories, not atoms.” A quantum physicist might well agree, as narrative is needed to describe the strange occurrences that go on at the subatomic level. Stories on our day-to-day level of existence are just as necessary too, as they help describe how we interact with each other and with this diverse and complicated world. And stories about the gods and magical happenings become more and more necessary as we become more and more estranged from ourselves. While fantasies such as Gaiman’s may deal with otherworldly matters that seem to have no bearing on hurricanes or wars, we may find that, in fact, they do have everything to do with them. How we tell stories about ourselves says volumes about how we impose our beliefs onto the world, often with very dire ramifications. This itself is one of Gaiman’s recurrent themes, from his Sandman comics to his previous bestselling novel American Gods—and it is richly explored in Anansi Boys.