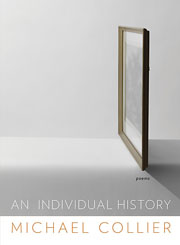 Some critics call Michael Collier an associative poet, which has always sounded a little redundant to me. Generalities trend when we can’t find an angle. When something is round it’s hard to know where it begins or how it ends and Collier writes very round, four-dimensional poems. Some are planets. Some are rocks thrown at windows. Some are peaches. We don’t really have the answer until that moment—each poem has one—when Collier takes a bite out of his verse and the juice runs downs his chin or his teeth crack or his mouth fills with cold, lunatic grit.

The poems in An Individual History are a combination of chance encounters and portraits. Intimate exchanges between passing characters who might not meet again fall in line with poems about Moms and Dads and sons and the occasional Grandmother. There are some brilliant visual images in this book, but these poems are not dioramas. It’s impossible to perceive the whole picture because the picture is always moving. For example, the first stanza in “Object to be Destroyed” seems to be about infatuation going astray: “I loved the painter’s ponytail / more than I loved her smears / and directed drippings, her grand / meanders of color that spread / in deltas to the floor / and left the ceiling pulsing.” His love tolerates the abstract but wants the specific:

I loved it more than when she crashed
my car on purpose
or hurled a trashcan through
the kitchen window.

By the poem’s end we’re led to understand that the object in need of destruction is an emotion: “I had made, ready as it was / to respond each time I wound up / the unblinking stare / and hypnotized myself / with what I thought I loved.” This fixation arises from a longing to feel connected, as if there is an instinctive bond between the painter and the poet. There’s no language to this connection; the old language of love is a poor substitute, but it’s all the poet has to grasp his own metaphor. The lines, “All those things her genius did / to make her genius bold and strange,” also clarify the speaker’s position: unlike hers, his genius is cowardly and familiar, and he accepts this at the end. What really must be destroyed, then, is our own genius if we want to make a poem.

Contemporary poetry seems to be a shell game between narrative, lyric, and metaphoric threads. Collier’s poems are shaped without being metric; he maintains excellent control of the stanza, but if you’re the sort of reader who’s hungry for a couplet you’ll be starving after reading this volume. As for narrative, these poems aren’t stories, and temporal markers only come up every sixty miles or so. Collier’s poems are long, lonely highways with lots of passing metaphor to recreate the motion. The roads are paved; there are signs and gas stations. But you’ll never find these interstates on a map.

The imitation of life takes several startling turns. Is it a horseshoe crab, we wonder, in “To a Horseshoe Crab,” or is it something darker? Collier’s forty-word opening stanza draws multiple connections:

Strange arachnid, distant cousin
of deer ticks and potato bugs
those armored pellets
who live between bark and wood,
stone and dirt,
though unlike them you wash up
hapless on beaches,
more like a bowl than a shoe.

The horseshoe crab as poet is washed up on the beach after mating too close to shore in the waters of its birth, “still attached, fucked / but not fucking.” Why do I picture this crab with gray hair and some tenure in its hip pocket, a dreamer in spite of everything? Here is Collier, strolling the Delaware Bay, having a great cry over the joy and futility of life. The reader would have to be a Pleistocene turd not to feel it—especially in an era when so many other poets are only writing about the nude beach volleyball played further up the dunes:

And sometimes
in your death throes
you capsize on the sand, which means
you turn up not down
and your legs row at nothing
so for a while you keep the flies away
but not the merciless fleas.

Collier, like the potato bug, is also a distant cousin to Sylvia Plath, and like her is very comfortable shaping his personal experience with myth. “Labyrinth” is a poem about a father and son seeing another father and son in the labyrinth of pressure-treated lumber at a playground. Be very quiet as you read it, for Icarus and Daedalus are sleeping. In “My Mother of Invention,” Collier portrays his mother as a contemporary Ariadne, her sewing machine “shaped like a smokestack turned on its side.” The spool migrates abruptly from his mother’s thread to his thread while fishing to the thread of a bird. This is one of the “associative poems” others have praised, but it may be wiser to treat these associations as riffs, like jazz solos. These are poems you can dance to. The rhythmic beats are familiar—Collier tackles classic subjects like a linebacker—but the song comes from a bird you’ve never seen before.

Also like Plath, Collier loves a good bee sting. Honey is one of the last things on his mind in “Necrophoresis,” a poem about the job of some bees to carry out the dead and keep things tidy. There are several apiary episodes in this collection and each gives a refreshing take on the ancient art of keeping bees. A good honey involves lots of careful editing, or, as Truman Capote once said, “You can make better honey with a pair of scissors than a pen.”

Writing poems is not only an art, or a job, for Collier. True, those things have happened for him, but writing is also his religion, and perhaps he tries to understand it the way he once tried to understand church. The first poem in this collection is called “Piety,” a signal to exactly where Collier tries to fit between silence and blowhards: “Once I had a good church voice / and having been a Knight of the Altar, / I have impeccable church manners . . . it’s a small, inner satisfaction.” There’s a reverence in his tone as he remembers his early schooling as he first learned to be a poet; his faith nevertheless thrives as a very quiet, humbling presence. This contrasts with the superiority the organist “displayed when it came time for him, / the last congregant to take communion.”

There’s nothing lonesome about An Individual History, yet Collier is often alone, and he’s seldom present in these poems; only ten or so are written in the first-person voice. Given his fluency with three-thousand-year-old connections—families, myths, love—Collier evokes a history that is personal but with numerous glances rather than one over-reaching vision. The title poem has twenty-six stanzas, to give an idea of how Collier feels about this, but it’s only two pages long—long enough to cover the history of clinical depression, its treatments, Auschwitz, atomic fallout, the Communists, and his maternal grandmother: “you might make the pilgrimage she did through the wards / of state and private institutions, / and make of your own body a nail for pounding . . . and in this way find a place in history/ among the detained and unparoled, an individual like her.”