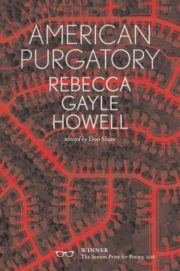 In American Purgatory, Rebecca Gayle Howell drops the reader into a dystopian world torn apart by industry and environmental cataclysm. In a work camp set in the American south, “Persons held to service / and labor” maintain huge fields of cotton and survive purely through biological impulse. It’s a world of dust storms, rampant crop dusting, disfigurement, and death.

Knowledge and access to knowledge plays a simple yet powerful role in this book. Everything we learn comes through the protagonist’s perspective; what’s known for sure is that no one escapes. The desert outside the town turns anyone into a desiccated corpse at the side of a highway:

. . . People
talk about leaving as if they could walk out
a door. They want to hear what it sounds like.
Few animals make it. The scorpions do okay,
but the big hides need water, and no one shares.
Bodies lie open on routes that lead out,
and the stink carries on the winds.

To the inhabitants, the outside world is nothing more than geese flying overhead or the traffic of cars and cargo trucks that rush through. It’s a corrupted commune with all of the inhabitants sharing duties. Some count those left alive at the end of the day, some thin voracious herds of jackrabbits, some find new sites to dig wells, some “landscape. Fire watch. Pave the lots. Cut / hair. Bartend. Plumb.”

The world given to the reader is hazed over by heat shine. More questions are raised than answered and the answers shift and shimmer in the distance. The lack of information is a constant murmur that uneases. There’s very little in the way of a past or future; the protagonist once had a mother and the mother died during her childhood. Perhaps she was sent to the camp in the same way paupers in Victorian England were made to work until their short lives ended. There are also the store rooms filled with “bloated, pickled heads, conjoined / tongues, limbless stumps.” Why are the dead brutes kept? There are no answers. The mix of uncertainty and the grotesque creates a forbidding atmosphere through suggestion: it stands to reason that there is an outside force actively condoning these atrocities. As well, the natives themselves seem more like robots than humans in that they care little for the ungodly strings that control and feed off of their lives. All that exists is the deranged present in an equally deranged town.

It’s also a world of corrupted American values. Religion becomes openly destructive, atavistic in its actions behind a crusade of environmental subjugation:

It’s prophecy, Slade says. We’ll be delivered
but we must utterly destroy all the places.
I think to what I’ve read. The heave offering.
Indulgence tax. We’re laying street today;
tar can’t get hotter.

The last will be first, Slade says. The pitch
of his voice river-low, as if he’s getting shed
of a remorse, and I can almost not hear him,
but I do. I say, Could you repeat that? He says,
The last will be sad. Now that I believe.

Capitalism has become cancerous and insatiable. “The economics will satisfy. One plus one equals / legion. Fight them for a share.” Hard work ripped straight out of the American Dream doesn’t pay off and might just strengthen the chains. If one wishes to glean a message from this collection, it’s that unbridled industry, capitalism, and environmental decay leads to a hostile world full of human chattel.

American Purgatory is a tantalizing prophecy that predicts one of the many possible futures at the logical end of capitalism. It’s tantalizing because at the end of the collection, the reader is left with a match and a wet fuse. The atmosphere that Howell creates is as charged and anxious as a southern evening, but the thunderstorm never comes.