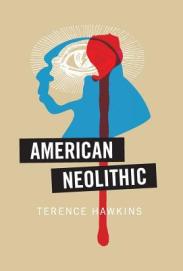 Terence Hawkins, the author of The Rage of Achilles, tackles everything from race to privacy rights in his newest book, American Neolithic. Set in a dystopian New York, American Neolithic follows Blingbling, a secretly literate Neanderthal, and Raleigh, Blingbling’s lawyer. In Hawkins’s world, Homeland Security controls the government and Americans are subjected to oppressive monitoring. With this as backdrop, Raleigh takes on the case of Blingbling, a member of a popular rap group who has been accused of killing a member of a rival gang. As Raleigh learns Blingbling’s identity and fights to keep his client’s secret, Blingbling fears for his life and for the surviving band of Neanderthals.

With their vastly different voices and backgrounds, Blingbling and Raleigh are a huge part of why American Neolithic is so good. While Blingbling’s poetic writing style resembles that of a “Neanderthal Prometheus,” Raleigh’s narrative has all the bravado, heart, and wit of Sam Spade. When things go wrong, Raleigh doesn’t get anxious, he finds solutions. He’s used to “represent[ing] the guilty—if not as charged, then generally of something much worse.” Despite Raleigh’s sharp tongue, he has a soft soul. He’s the sort of character who is deeply affected when he is “hugged by a happy child.” In a lovely passage halfway through the book, Raleigh meets a Neanderthal child and says:

[The child’s] sudden gratitude had affected me more than I would have expected. I’d managed to lead my life without any significant emotional entanglements . . . I’d been separate from the beginning . . .
The funny thing is that the smaller world I’d been so eager to escape kept me from ever becoming fully a part of the larger.

Like Raleigh, Blingbling is a memorable character. Although he can only speak in grunts, he writes like a scholar. The Neanderthal’s facility with words makes his imprisonment that much more tragic. Blingbling believes, “I had hoped to be the Neanderthal Prometheus. Instead, I am Ahab, dead already . . . ” Blingbling is fascinated with the power of language, and how the written word can preserve a species. In one of the many touching moments in the books, Blingbling remembers the day he found a Speak and Spell in a dumpster. Blingbling “nearly soil[s]” himself with joy when he realizes what the toy can do. It’s a moving scene that highlights the self-awareness of the character. Similarities between Blingbling’s story and the experiences of various oppressed “others” in America are obvious. Still Blingbling isn’t just a symbol; he’s a multi-layered, sensitively wrought character, and readers will root for him.

Terence Hawkins’s American Neolithic is a special novel; thematically rich, it also provides all the pleasures of a hard-boiled thriller. The unique premise and lovingly crafted characters will stay with you long after you’ve closed the book.