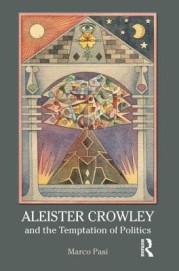 Here’s the sticky wicket with the Great Beast 666. On the one hand, Aleister Crowley shines as a star in the firmament of history, champion of individualism, gadfly to hypocrites, proto-punk provocateur and publicity-chasing prankster who donned the mantle of prophet to receive the religious revelation of the present age: Do what thou wilt shall be the whole of the Law! Love is the law, love under will! On the other hand, the revelation of the religion of Thelema calls for shaking free of the shackles of “care for the feeling of others” in favor of engagement in “blasphemy, murder, rape, revolution, anything, bad or good, but strong.” The New Aeon Crowley prophesied would finally spell the end to that “nauseating cult of weakness,” democracy, limping along on the “utterly false” premise of equality among humanity. In truth, Crowley declared, humans are either masters or slaves.

Thus, the man who thumbed his nose at restrictive conventions by writing poems about sodomy and incorporating the doodle of a penis into his signature was also the man who recorded dreams of advising Hitler and wrote that Eastern European Jews practiced human sacrifice. The man who described the United States as “the ‘foul oligarchy of the West’ . . . a cesspool of depravity and corruption, founded solely upon the search for individual gain and profit” also said that world peace “depends upon the original idea which aggrandized America in a century from four millions to a hundred: extreme individualism with opportunity.” The man who danced with joy when he heard the news of Queen Victoria’s death is also the man that scholar Marco Pasi, following at least some of the argument of Richard Spence’s Secret Agent 666, believes worked for British intelligence while in the United States. This might explain his pro-German writings during World War I, though, as Pasi notes, when in 1915 Crowley “tore up his passport in front of the Statue of Liberty and proclaimed the independence of the ‘Irish Republic,’” this can’t be read purely as the audacious act of an agent seeking deeper entry into the anti-British underground, since Crowley had been “calling himself Irish and predicting England’s ruin as early as 1900.” This self-described “Sinn Feiner” is the same man who wrote that “Jews and niggers” were “imaginary,” figments of poisonous “submergence of the individual in his class” and reactions between groups of people identified by “class” rather than as individuals. The question is unavoidable as it is disorienting to tackle: What were the politics of the Wickedest Man in the World?

Here’s how Marco Pasi phrases the conundrum: “What does it mean that “Crowley, despite the apparent radical individualism of Thelema, could look at contemporary totalitarian ideologies and regimes not with horror and downright rejection, as one might have expected, but with interest, or even a certain degree of fascination”? Aleister Crowley and the Temptation of Politics plumbs that fascination, holding that Crowley “can be adequately understood only when placed within the historical context in which his intellectual education took place, and in which his proposed religion was developed.” While this is a truism, the phrasing reveals Pasi’s central concern: Thelema. Pasi presents Crowley’s career a progression with “two main phases,” an “individualistic and romantic” phase followed by a mature phrase devoted to spreading his new religion. Denouncements of democracy and other personal “idiosyncrasies” of Crowley are superseded, in this reading, by a move toward the “democratization of magic” as Crowley evangelizes for his religion’s “universalistic message.” And so we hear that “certain aspects of the Thelemic religious message, as Crowley himself presented them, seem to be in agreement with certain aspects of an elitist and, occasionally, totalitarian ideology,” yet also that

these aspects were not peculiar either to Crowley or, for example, to Nazism; rather, they pervaded to a certain degree English intellectual circles, especially progressive ones before the First World War. The implications of social Darwinism, for example, were discussed not only in radical political circles but also, and primarily, in scientific ones, and were even considered respectable enough before the horrors of Nazism led to a universal, uncompromising condemnation of these ideas.

Pasi is Associate Professor in the History of Hermetic Philosophy at the University of Amsterdam, and this book, which began as a dissertation in the early 1990s, still bears traces of wariness about its humble goal of contributing “to the ‘normalization’ of Aleister Crowley as a subject of scholarly research.” Pasi has performed meticulous and multi-lingual archival work, the results of which will be of interest to specialists but may disappoint the general reader. For instance, there is a chapter here on Crowley’s connection with Fernando Pessoa, yet while one gets the sense that Pasi has tracked down all the clues, there isn’t much of a story to tell. On other fronts, Pasi enters the archive to debunk. He parses out various conspiracy theories spun about the magus, like that he staged his suicide in Portugal so he could slip into Germany and serve as Hitler’s occult advisor. While the suicide stunt fits with Crowley’s broader profile of making himself the subject of headlines, Pasi can state plainly that “Neither in Crowley’s diaries from that time nor in the things he occasionally wrote later about Nazism do we find anything to suggest that he had had any personal contact with Hitler or with other members of the Nazi party.” This is a useful contribution to the study of Crowley, to be sure, but, again, not necessarily a great story.

Pasi contributed an essay to the recent academic anthology, Aleister Crowley and Western Esotericism (Oxford University Press, 2012), which charted Crowley’s views on magical experience—notably rationalization of such experience via psychological and even physiological lenses, until his “call as prophet of a new religion probably produced a cognitive obstacle that prevented him from taking the process of psychologization to its logical extreme.” Here as well, Thelema takes precedent over all else. Yet Pasi’s narrow subject—Crowley’s claim that his “magick” was empirically verifiable, “the Science and Art of causing Change to occur in conformity with Will,” and how this notion fits into broader historical trends of religion and rationality—is one on which he can demonstrate his strength as a historian. Pasi gives attention to some of the same issues in this volume, under the auspices of discrediting “The equation ‘right wing = irrational = esotericism,’ which has been so widespread among left-wing intellectuals after the Second World War.”

This sense of left-wing versus right-wing stances of citizens and governments is how Pasi employs the word “politics,” a term he never defines. Readers expecting a sense for politics more broadly, as human negotiations of desire and power and the expression of recognized or unconscious ideologies therein—“politics” as most contemporary scholars of religion would use the term—will find Pasi’s title misleading. He says, “Crowley did not write much explicitly on politics, but it is my conviction that his body of work is replete with fascinating political implications,” a truism that reveals naiveté but seems also to express some frustration with “politics” as a subject. The question of meeting Hitler is one of fact; the question of sympathizing with Hitler’s politics is murkier, depending upon consideration of multiple, often subtle, tendrils within the Crowley oeuvre. Ultimately, Pasi argues that “politics” posed merely a “temptation” to the Great Beast, all seemingly political statements and actions aside. Pasi holds that Crowley, devoted foremost to the goal of spreading his religious message, did all sorts of things for attention, to draw attention to Thelema. It is prophetic calling—rather than any kind of political leaning—that stands as “the motivation behind some of his choices and behaviours, which might otherwise appear simply extravagant, or dictated by a compulsive need for ‘transgression.’”

This is a soothing thesis, fitting a dissertation geared at “normalizing” a figure that, at the time of its writing, was still taboo. Within this framework, Crowley’s most shocking statements can be “explained . . . by the ‘pragmatic' attitude that he developed in parallel with his messianic convictions.” This also represents a clever defense, smoother than, say, some of the Crowleyite attempts to rationalize the magus’s comments on Jewish blood libel. With Pasi’s thesis, the most outlandish statement or action becomes the early twentieth-century equivalent of click-bait. That time he wrote an open letter to the German air command, urging them to bomb his aunt’s house? That time he urged a goat to copulate with a woman for a bit of magic? His typologies of Jews (active and passive, with different size noses) or the effects of the tropic climate on the sexual drives of Anglo women? All of this is in the service of the gospel of the new age. Pasi is far more parsimonious with his examples, avoiding all of the ones above, but with Crowley the examples are endless—and Pasi’s formula is presented as having applicability across the board. As Pasi puts it, in connection to a piece published by Crowley where he imagines great English poets of the past rewriting a popular patriotic WWI ditty, “Probably, once again, Crowley wished to exhibit his heretical and iconoclastic nature without taking up an explicit position.”

This feels unsatisfying, not to say disingenuous, skipping over critical engagement with Crowley’s statements in favor of the standard explanation of attention-getting. Moreover, to ignore the dynamics of such attention-getting (to what audience was Crowley speaking? How was a given statement or act supposed to draw that audience to Thelema?) returns us to limited conception of “politics” at play in this book, which, like a ceremonial working gone bad, invokes far more than it can control. Simply put, Pasi raises a question he does not answer. His book will certainly be of use as a resource for future academic work on Crowley, but as for the issue of Crowley and politics, the attention given in these pages only exacerbates the problem—leaving this reader, at least, flipping madly back through Crowley’s texts trying to make sense of his statements, increasingly disturbed and increasingly confused.