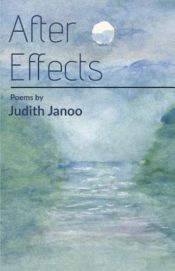 Judith Janoo’s poems in After Effects are deeply personal, and at the same time historical and political. The effects of war on a soldier and his family run through these narratives, with language that speaks to personal loss. These are poems rooted in the earth and the natural world, poems which will resonate with readers. The book is in two sections: “The Department of War” and “The Department of Peace.”

In the first section, the poem “What You Passed On” speaks directly to the poet’s father and shows the complexity of his character, from fishing to literature to war mementos:

These reminders of war are a stark contrast to his other interests and abilities, such as “how to graft/ fruit trees, transplant a cedar . . .” Not surprisingly, the father figures prominently in many of these poems, but it is how he affected the daughter that is at stake:

And the man I knew who made it
up the bluff if Omaha Beach,
never really cleared the beaches
of gunfire. Nights, his bottle

half empty, he aired
the start of it and I’d listen,
then hear him pace the hall
outside my room . . .

Janoo’s precise descriptions and sense of place make these poems all the more poignant, as in “Moon Slide”:

My mother sometimes rides with me
down the old oak banister,
our shadows moon-sewn

I was sure I could fly,
that one day I’d take us above
the toll of my father’s war.

In the second section, she weaves together poems that have to do with race, peace demonstrations, weather, and daily life. “Stacking Wood” is a precise description of a necessary northern chore, a poem reminiscent of Robert Frost:

I cinch in the view with winter’s gold,
building round and higher
until it frames sky
purpling over stands of balsam
and cedar, green incense of winter,
softening this hardwood wall.

Anyone who’s stacked firewood knows the tedium and beauty so well captured in this poem.

Rich in praise and paradox, both the peace and war sections are solidly grounded in the northern land the poet loves, and seasoned with regret. These are complex poems, showcasing the craft of a versatile writer. Let’s hope for more from this talented author.