Join us as we celebrate the launch of a new work by acclaimed poet Adrian Matejka! A collaboration of visual art and poetry inspired by two classic Funkadelic albums, Standing On the Verge & Maggot Brain (Third Man Books) offers a chorus of poems and visual art that is psychedelic and bright, full of quarter notes disguised as words. The poems bend Funkadelic’s glitter and funk into a deep exploration of the poet’s own radiances and shadows. The collection also bends traditional book design: Standing On the Verge & Maggot Brain is more accurately described as a double-chapbook, featuring two front covers and no back cover—synesthesia for the ear and alchemy for the eyes and heart.

At this special launch event, Matejka will be joined by his visual art compatriots on the work, Kevin Neireiter and Nicholas Galanin. For the Standing On the Verge section, Neireiter translates Matejka’s music into stained glass graffiti. For Maggot Brain, Galanin (also front man of the Sub Pop band Ya Tseen) provides intense monochromatics reflecting sorrow and transcendence. Trust us, you do not want to miss this jam!

"Adrian Matejka was one of the first poets I read, one of the first poets I loved to read. For all of the reasons that are on display here: an ability to honor the stillness of a moment—to zoom in and pick apart all of its movements. To attach the self to the past as a way of illuminating it, and then backing off when needed. I first adored the work of Adrian Matejka because it was the work of a bandleader. Patient, clever, controlled, visionary. It is refreshing, to return to his work once again, and be as in awe as I always have been."
— Hanif Abdurraqib

"The poet is a shapeshifting mastermind bringing emotions, histories, and ideas to the realm of the living. In The Big Smoke Adrian Matejka reminds me that Jack Johnson is America, made in America and a product of its own distorted myths. With Standing On the Verge & Maggot Brain, with word and the memory of a song that is both a sacred lullaby and a fight song, he has opened a portal to reclaim a complicated love.”
— Meshell Ndegeocello 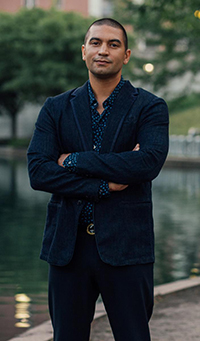 Adrian Matejka was born in Nuremberg, Germany and grew up in Indianapolis, Indiana. He cut his first rap mixtape in 1985, but nobody listened to it and he abandoned rap for poetry. He is the author of several poetry collections including Mixology (Penguin, 2009), a winner of the 2008 National Poetry Series and finalist for an NAACP Image Award for Outstanding Literature, and The Big Smoke (Penguin, 2013), awarded the 2014 Anisfield-Wolf Book Award and a finalist for the 2013 National Book Award, 2014 Hurston/Wright Legacy Award, and 2014 Pulitzer Prize in poetry. His most recent collection, Map to the Stars, was published by Penguin in 2017. A new collection of poems, Somebody Else Sold the World, will be published by Penguin in July, and his first graphic novel, Last On His Feet, is forthcoming from Liveright in 2022. Among Matejka’s many honors are fellowships from the Academy of American Poets, the Guggenheim Foundation, the Lannan Foundation, the National Endowment for the Arts, and United States Artists. Matejka teaches creative writing and literature at Indiana University in Bloomington, and served as Poet Laureate of Indiana for 2018-19.

Nicholas Galanin roots his work in his perspective as an Indigenous man connected to the land and his culture. Over the past two decades his work has ranged across media, materials, and processes in which he has splintered tourist industry replica carvings into pieces. In 2020 Galanin excavated the shape of the shadow of the Capt. James Cooke statue in Hyde Park for the Biennale of Sydney, examining the effects of colonization, critiquing anthropological bias, and ultimately suggesting the burial of the statue and others like it. In 2021 he created a replica of the Hollywood sign for the Desert X Exhibition which reads INDIAN LAND, directly advocating for and supporting the Land Back and Real Rent initiatives. Galanin holds a BFA from London Guildhall University and an MFA from Massey University in New Zealand; his music (as Ya Tseen) is released by Sub Pop Records in Seattle. Galanin lives and works with his family on Tlingit Aani, Sitka, Alaska.

Kevin Neireiter uses a wide variety of mediums in his art, including paint, pastel, clay, wood, and objects found around his home. Many of his artworks are an attempt to describe what he hears in music. Kevin was thankful to have been asked to create the cover for Adrian Matejka’s debut poetry collection, The Devil’s Garden. When he’s not making art, he is usually making music or maintaining his Funk shrine (a sculptural homage to Pedro Bell’s album cover for Funkadelic’s Standing On The Verge Of Getting It On.) He currently lives in Seattle, WA, with his two daughters and his dog Ringo.