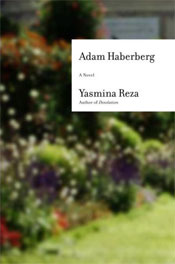 Nearly all of Yasmina Reza’s creative output examines a short list of pet themes: the nature of art (in her breakthrough play—appropriately titled Art—three friends squabble over a white painting); the division between the internal self and the social self (nearly 80 percent monologue, The Unexpected Man climaxes in the play’s one exchange); and man’s disillusionment with the world (she titled her last novel Desolation, and has also translated a stage adaptation of Kafka’s Metamorphosis). In Adam Haberberg, her third novel, Reza eschews her usual humor for a more solemn and alienating tone.

Adam Haberberg is a struggling writer who, at forty-seven, is “no longer fond of his book.” To add to his melancholy, he suffers from ocular problems—glaucoma and retinal thrombosis among them—and his wife, Irène, despises him. This is the man that Marie-Thérèse Lyoc, Adam’s old friend from school, happens upon in the Jardin des Plantes in Paris. Though “you couldn’t call her ugly, thinks Adam,” nothing about her, neither her looks nor her personality, is particularly endearing. Marie-Thérèse is a successful entrepreneur, running a number of merchandise outlets that sell “fridge magnets, magnetic words” and other tchotchkes.

Adam and Marie-Thérèse decide to go out for dinner, and the novel charts the remaining daylight hours—a long car ride, dinner, cocktail conversations—through Adam’s meandering consciousness. Marie-Thérèse is hardly a close friend, nor even someone he particularly likes, but the sexual tension between the two propels the narrative nonetheless, providing a much-needed counterpoint to Adam’s weightier internal monologue. Reza’s indebtedness to modernism’s stream-of-consciousness technique is obvious, though she clearly lacks Joyce’s linguistic firepower and Woolf’s unnerving control. The text is pared to essentials, yet the sentences are ultimately mere accumulations of detail devoid of the warmth Reza captured so well in Desolation. The protagonists here are so unlikable, with such obvious (though supposedly hidden) disdain for each other, the reader can’t help but feel distanced.

What’s most lacking here is Reza’s incisive humor. Though everyone in Art is miserable, anxious, and/or angry, none is above self-deprecation; characters maintain their integrity and grace by laughing with the audience. But though the momentum of Adam Haberberg continues to the last page, the pacing—especially for such a short book—feels slow, atmospheric, and self-consciously weighty. Because she doesn’t give us any moments of tenderness capable of provoking sympathy, it’s hard to like anyone. Even Albert, the friend Adam calls repeatedly in the novel’s first quarter, is always “getting on [Adam’s] nerves.”

Reza’s previous characters’ humanity surpassed even their worst self-hatred; here the scorn is projected outward. The bond Adam and Marie-Thérèse used to share (another of Reza’s commonly used devices) is barely enough to sustain their awkward time together. But when his best friend and his wife vilify him, the reader can only share Adam’s own outlook: unpleasant boredom.