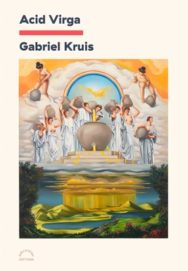 In meteorology, a virga is a streak of precipitation that appears to be attached to the undersurface of a cloud and usually evaporates before reaching the ground. Gabe Kruis’s debut book, which moves back and forth between the author’s home of New Mexico (where virgae are frequently seen), and the mineral fact of New York City, embodies this aspect of the book’s title. But this precipitation that melts before it hits the ground takes its name from the Latin virga, meaning rod or stick and evoking the enchanted wand of the magician, associated in the medieval era with the poet Virgil. Then there’s the adjective acid: The corrosive chemical is signaled by an epigraph from George Oppen, but the psychedelic cover image of neoclassical maidens decanting liquids suggests the idea of lysergic acid as well.

I spend this time on the title because it’s the first signal of one of this book’s most noteworthy qualities: its confidence. Choosing a recondite noun in ambiguous relationship with its multivalent adjective to generate a phrase that ends up being perfectly right is characteristic of much of what will follow. It’s the first poetic move of a book whose intention is, as Keats wrote, to load every rift with ore.

This confidence is neither arrogance nor bombast, but a sure-footedness that is evident in the overall architecture of the book, which is first intimated by the typography of the table of contents. Acid Virga is composed of three poems, each of whose names are set in bold type, but “Waterfall Effect” and “Regression” are both followed by subtitles which turn out to be specific movements of the poems in which they fall. The result is a book with a brief overture, “Say,” a monumental core poem, “Waterfall Effect,” and something like a falling action, “Regression.” The decision to arrange the book in this unique way is powerful and effective.

“Say,” the one-page intro poem, is a bit of a fake-out, since its diction (which recalls the chiming tunes of Andrew Joron) will not accompany us through the rest of the book. We enter the book proper with the epigraphs to “Waterfall Effect,” from German filmmaker Hito Steyerl and poet George Oppen. The very presence of these two names on the page sets up a dialectic—metropolitan art stardom against hermetic West Coast sincerity. It’s a tension we’ll follow through the movement of the poem, which cuts vertiginously between the southwest of the poet’s upbringing and the New York of his present.

The poem opens with the narrator rereading, and working through, a decade-old poem whose text enters that of the verse we are reading via quotation marks. It’s another mark of confidence that the poet risks incorporating old, frequently purple, passages with the clear understanding that there will be a contrast between this juvenilia and the contemporary work. And there is. Kruis’s poetry is marked not only by verve but by a vivid clarity of image which has few, if any, equals among his contemporaries. Alice Notley’s blurb draws attention to the verse of Schuyler, which is absolutely right; the phanopoeia pops, and any poet could learn from it.

One moment of weakness is the author’s decision to refer to people by initial letters in the poems (as in, “this sonata- / form dub-step trance / piece J composed”). It’s an attempt to deal with the question of the proper name in poetry, but readers can’t help but long to hear what Kruis’s fine ear would do with the prosody of actual names (as in O’Hara’s “Joe is restless and so am I,” or Berrigan’s “Dear Chris, hello”). This is a very minor quibble of curiosity, however, with what is by and large an astoundingly accomplished first book.