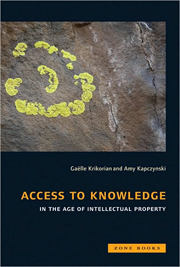 The access to knowledge movement, which often goes by the acronym A2K, is like an iceberg: only a small part of it rises to the top of the media stream where nonactivists get a glimpse of it. The most visible struggle for most of us is probably that of music and film companies vs. those who download media without paying, either for private use or for sampling purposes. The blocking or restricting of Internet access in China and Egypt, and the successful struggle to bend pharmaceutical companies’ patent rights to bring affordable HIV drugs to the people of Africa (a success now being actively undermined), are other high profile instances. But there are many more facets, many quandaries and contradictions inherent in the wider effort.

The fact that A2K concerns are so varied is one of the problems its activists face: “Can file sharers, software programmers, subsistence farmers, and HIV-positive people find useful common cause in their joint opposition to existing regimes of intellectual property?” This 600-plus page collection of essays is intended to offer a sampling of such efforts, as well as a history of the movement and help for the reader trying to understand all these questions within a larger context. The essays range widely, into some very unexpected areas, from the matter of how indigenous knowledge can be protected (including something called “paid public domain”) and even John Locke’s views on what we mean when we say we “own” ourselves.

Each of the editors contributes an introductory essay surveying parts of this newly-emerging, fragmented, and unstable field. Amy Kapczynski provides a “conceptual genealogy” of the movement, while Gaëlle Krikorian addresses the activist and political aspects, with an accent on struggles between the third world and the developed countries.

One of the central points of debate is one most of us would understand, at least economically: If a creator—be it an artist or a pharmaceutical company—has invested time, energy, and money in the creation of something, shouldn’t that person or entity have the right to control its dissemination and reap financial benefits?

This assertion is, as the essays here remind us, a conceptual approach or narrative that supports the expansion of intellectual property rights. But there are other narratives, as well. Agreements such as the Doha Declaration maintain that some things—public health, for example—trump intellectual property rights. There is no consensus about the point at which the sheer importance of some concerns—from access to medicine to text books to sampled music—outweigh those rights.

Not surprisingly, there is a great divide between the attitudes of the developed nations and those that are still rising. As with energy consumption and pollution, developing nations feel they should have the freedoms that the U.S. and the European Union had when they were younger. Some of the arguments the underdogs offer are very intriguing. In “Undermining Abundance” Philippine social activist and engineer Roberto Verzola offers this observation:

Furthermore, the countries that complained most loudly about the piracy of their intellectual property were themselves most guilty of pirating intellectuals such as doctors, nurses, and engineers from the Third World. The latter was deemed a more malignant case of piracy because it took away the original and left no copy behind.

The U.S. and its business interests often come off as the bad guy in these essays. Very early in 2001, for example, the new Bush administration tried to strike down policies, authorized by international treaty, that allowed Brazil to have some leverage over international pharmaceutical companies and so get AIDS drugs to more its population; the uproar was so great that the Bush administration quickly retreated. Bill Gates once flew to the Philippines to make a deal with the government whereby their pirated software was declared legal in exchange for which previously ignored copyright laws were to be enforced for the general populace.

As would be expected, several writers discuss ideas such as that of an “intellectual commons,” of open source software, of open-access publishing, of collective research, and similar efforts that would be crippled by enforcement of copyright laws. (True to its own spirit, this entire text is available as a free download at www.zonebooks.org/pdf/ZoneBooks_A2K_.pdf.) Among the more interesting points made is how different a physical commons is from an information commons, the first of which is said to suffer under common ownership while the second thrives. Even on these points there is disagreement, some even worrying “that more information could in some cases not improve, but rather threaten access to knowledge.”

Some of the arguments sound radical, such as Krikorian’s point that increasing copyright laws creates conditions favorable to the “production of pirates,” and that “they easily fit into a political environment that is predominant in many Western countries in which security and repression ha[ve] become routine.” Others sound a little foolish: Cory Doctorow’s contention, for example, that, “If copying on the Internet were ended tomorrow . . . YouTube would vanish . . . Flickr would dry up and blow away,” hardly seems a weighty argument for liberalizing intellectual copyright laws.

But then, others might believe that it is. Like so much within the A2K debates, this comes down to a matter of opinion, political stance, economic position, and more; in short, how one views the present social reality, and what one holds as a social ideal. This collection is vitally important, then, in that there is much here to help us make our opinions more informed ones, even while it illustrates how there are no easy answers to the relevant questions.