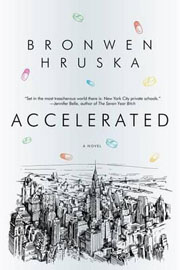 Bronwen Hruska's Accelerated combines a social satire with a literary thriller to explore the lengths to which parents will go to give their child a perceived advantage in a hyper-competitive world. The novel’s detailed, dishy taxonomy of New York City’s “1%” is rendered through the lens of newly single father Sean Benning, whose son Toby attends the prestigious Bradley School. Ellie, Toby's estranged mother, has deep enough family ties to Bradley that her parents insist on paying Toby’s tuition. Now, school officials are pressuring Sean to medicate Toby for Attention Deficit Disorder-Inattentive Type—a move Sean is reluctant to make.

Although Sean feels trepidation resisting, he holds his own for a while: ably volunteering in Toby's classroom, repelling the school psychologist pressuring him to test Toby for ADD, even ducking out of a parents’ social for a bathroom liaison with the married mother of his son’s playmate. Hruska’s prowess with both satire and plot are evident in the scene, as their sex is interrupted twice: once when Ellie calls to tell Sean to get Toby evaluated, and again when Sean actually asks the woman if their sons have a playdate: “He wasn’t sure if the yes she gasped had to do with the playdate or the thrusting.” Toby eventually undergoes testing, and the results confirm the doctor’s suspicions. After Sean tests the pills on himself and finds no ill effects, he relents.

Until Sean accepts the diagnosis, the book is full of shadowy depictions, from which much of the satire comes. But Hruska, who runs a small press focused on international crime novels, plays with these shadows as a plot device; her effective and amusing, if cartoonish, caricature is actually a means of withholding information about Toby's diagnosis, the culture of the school, and the hazards of the medication—information that is key to the action of the book’s second half.

When Toby reacts badly to the medication, the first-world maladies become not objects of satire but of danger. Toby’s friend’s peanut allergy becomes more than it first seems, as does Dr. Shineman and her pressure to medicate, as does Toby’s classroom teacher Jess and her resistance to it. The most volatile variable in the equation are the pills themselves.

In a late scene, Shineman is overheard defending the decision to medicate children. She begins by extolling the school to Jess. “The curriculum is accelerated. We have to help these kids feel good about themselves, allow them to focus on the work so they can succeed.” Later in the same scene, she continues:

“Boys are put on ADD medication every day all over the country,” she said. “This is no different. So please, stop making it sound so sordid. I’m just helping to insure that no child falls through the cracks. The health of the school depends on an ultra-high level of achievement. Our kids can do it. It’s inspiring.”
“So why the hell are you drugging them?”

Jess's reply, especially her choice of the word “drugging,” captures both the righteous concern about the abuse of ADD diagnoses and unease with that concern when it comes to the stigma of learning disabilities and ADD more generally. That mixed feeling is no indictment ofAccelerated, but rather reflects the issues. If the populace of Accelerated’s world is extremely powerful, it is also tiny in number. Good thing, too: it's a world in which a doctor testifies to the safety of ADD medication by saying, “I took Ritalin all through med school as a study drug. Everyone I know did.” Failing to read at a sixth-grade level in third grade is a failure only in the most absurd sense of the word.

While the book’s ending leaves Sean vindicated, the nature of his initial resistance is a tad perplexing. Until Sean tries Toby’s medicine for himself, his resistance to testing and diagnosis seemed based either in ignorance and stigma about ADD or in the attitude he deplored in Bradley parents—that their children were exceptional in every way. I wondered why this man couldn’t think back to his middle-class upbringing and realize that most parents would give anything for their child to have the attention and the advantages his has. It seems his resistance reflects distaste for the messenger (the upscale private school) rather than for the message (a possible learning disability). The lack of clarity makes Accelerated a smaller story than it could have been.

In the end, though, Sean’s blind spots helped me better understand Bradley parents, and parents generally. Like their own children, these doctors and financiers and former professional basketball players are not exceptions to anything. They are parents trying to keep pace in a race that keeps changing, to do what they imagine everyone else does: give their child every advantage imaginable. Their blind spot is assuming that those advantages fill the deficit of attention given to their children, as if advantages can somehow equal the love that’s the first and best medicine for human disabilities.