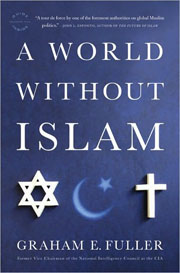 “If there was no Islam,” Graham Fuller argues, “there would certainly be other religions around playing similar roles under similar conditions. With no religions at all, we would still readily find or create other ideologies to justify the same acts. Thus, a world without Islam does not markedly change the nature of things.” Fuller, former CIA Kabul Station Chief and former vice-chair of the National Intelligence Council, here pads out a 2008 Foreign Policy cover story by imagining an alternative history in which Islam is not a factor. There is open speculation (if Britain had never controlled India, would there have been partition?) and a revision of what Fuller takes to be popular misconceptions. The Crusades, for instance, were motivated primarily by “economic, political, and social” factors, not theological ones. The Reformation, likewise, “exemplifies . . . the intensely political nature of events usually understood as being primarily religious in character.” To focus on religion as a motivating force in such events he considers a mistake; religion “is the vehicle of political confrontation and turmoil, not the cause,” “a means to an end,” a tool used by “political leaders” to manipulate the masses.

The goal of this argument is to clear religion from the practical strategy of American foreign policy. Fuller holds that America must “act as if Islam did not exist in formulating its policies in the Middle East.” Such a stance leads to prescriptions like “no more foreign boots on the ground in Muslim countries,” as a way to delegitimize Bin Laden’s mission by ceding to his demands. Fuller also urges that the Israeli-Palestinian conflict be solved, implying that this will be easier than it has appeared over the course of history once negotiators realize that Islam has nothing whatsoever to do with the creation of the Palestinian problem, and he urges a shift in rhetoric: “‘Zero tolerance for terrorism’ is another slogan that needs to disappear,” he writes, claiming that it is an “empty phrase.” While not offering an apology for terrorist tactics, Fuller insists on their occasional necessity, quoting the Declaration of Independence at length and resuscitating the old semantic saw that one person’s “terrorist” is another’s “freedom fighter.”

That is not the only slippery slope in this strange book. Fuller idealizes religion as something separate from politics. “Sadly,” Fuller writes, “when religion becomes linked with political forces, it tends to lose its soul—its spiritual dimension.” Early in the book, he draws a line between “religion as faith” and “organized religion,” implying that the first is something private and deeply considered, while the other is “a supreme vehicle for many other facets of human aspirations, including politics, fears, drives, prejudices, dreams, and bitterness.” Fuller insists that in those instances when religion voices “prejudices” or “bitterness” it is not authentic, but rather another tool in the Machiavellian toolkit used to manipulate the gullible masses. Certainly religious commitments and symbols are prey to manipulation, but to isolate some form of authentic “religion” from “politics” is not only misleading as an approach to religion, it also obfuscates the complex dynamics of the Islamic ummah, a community which has always been as much about “state” and “power” and “politics” as about faith or the bolstering of ethical claims with eschatological promises.

By reading much of religious history as merely political, Fuller gives us a world in which religion is tangential to Nazi Germany, to Zionism, and to Al Qaeda. Progressing through a selective whirlwind tour of history, Fuller skips from example to example without adequate consideration of context. A foray into China, for instance, supposedly shows that ethnic diversity is “the particular problem, not Islam,” while ignoring the complicated relation of the Chinese government with Islam, long defined as an ethnicity. Most dubious, however, is how the outcome of this book’s speculations seems predetermined. Imagine a world without Islam, and the world looks very much like the one we already know. There’s some hubris and some tragedy in Fuller’s devotion to his own argument, and in the assertion that the path of foreign policy will be somehow clearer if religion is brushed aside.