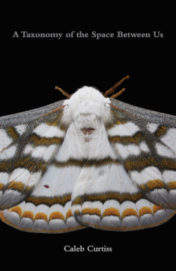 "Even now, I know I could use this moment, / / this dying thing to remember her with, / but I don't want to." Thus, triggered by a dead bird, Caleb Curtiss in A Taxonomy of the Space Between Us resists (yet retains) the memory of his sister's death from a rural car accident. Throughout the chapbook, tension surfaces between presence/memory and absence/forgetting. "Self-Portrait without My Dead Sister," for instance, ironically remembers his sister's absence; in several poems, a left parenthesis without a matching right interrupts a strain of thought, which seems soon forgotten with each successive strain becoming a strand of memory both uncontained and unending:

(a presence that will burn

(long after it's passed

The poems weave details and reflective moments well. The language is plain and effective in resisting the urge to elevate (and overdo) a grief that seems akin to

. . . the chassis
of an overturned car

steadying itself beside a corn field,
a stop sign.

Powerful insights are rooted throughout, often bolstered by Curtiss’s technical skill, which can be seen in the effective enjambment between these stanzas:

I have even learned
to grieve formulaically,
while the function of your absence
has grown less and less

integral to my algorithm: you
aren't even you anymore.

While the book coheres through Curtiss's sister's death and his struggle to contain (or not contain) memory and grief, in some poems, the death's unmentioned. The ghost of the other poems, though, seeps into these "breaks." Only a few parts seem to border on being overdone, as here:

This time you're asleep

and there's nothing I can do to wake you up.

This time you say how tired you are.

Curtiss repeats not once but twice, as if to convince himself things are ok. Absorbed, he seems to forget the reader. The last line, though, redeems this part—his sister, or her spirit, being woken up by the conviction of his wish.

There are poems in varied stanzas, including couplets and double-spaced stanzas, and even an experimental poem with footnotes. One poem employs a definite spatial quality, which proves all the more powerful for its uniqueness in this volume:

Still
the house
Still
the room

In the mind
Still
Be still
be still

Curtiss (and perhaps the reader) needs the silence between these words. This poem takes chances in filling a poetic void between memory and forgetting, "where there could have been / more than a body fallen, / a body fallen from."