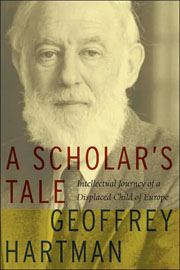 “What haunts a memoir that does not have the excuse of a significant personal conversion, revelation, exculpation, is the nexus of the life and the work,” says Geoffrey Hartman, and it is this nexus that he explores in his slim memoir, a reflection on his years as a leading figure in literary criticism—a career spanning work on Wordsworth and the Romantic poets, engagement with deconstructionism, a turn toward the hermeneutics of rabbinic midrash, and an ongoing interest in trauma, psychoanalysis, and collective memory. As indicated by the subtitle, Hartman was a child refugee, shuttled to England on a kindertransport. The Holocaust has become an increasingly central influence on his writing, and indeed, A Scholar’s Tale echoes some of the sentiments of the survivors whose testimonies he helped collect as part of a Yale project, aiming for “a kind of completion” to his life and offering a witness to his existence that, while focused primarily on his work, is nonetheless other than his work. This book is not, then, literary criticism per se, though the sort of “completion” it offers is elliptical, a weave fringed with loose ends, collecting anecdotes and opinions along with catalogs of influences and lists of subjects omitted.

All this gives the book the pleasant feel of an after-dinner monologue—one delivered by a brilliant man with a storied past who, over a couple of brandies, dips into his memories, reminiscing about old times and old acquaintances and revisiting the texts and thinkers who have mattered to him most. This approach, too, accounts for the book’s flaws—the flitting across the surfaces of subjects rather than engaging in any real exposition or argument, the tendency toward cliché, and the emotional distance with which certain circumstances get treated. Take, for instance, the case of Hartman’s friend and colleague Paul de Man, whose death is treated cursorily, followed fast by revelations of anti-Semitic and pro-Nazi propaganda in de Man’s early writings that Hartman handles with an awkward level of diplomacy. Many readers will be disappointed with such passages, along with drowsy bits about how, as a student, Hartman could have become a gargoyle in the cathedral that is the Sterling library, or his claim that “religion is sustained by ritual and romance, intensely imaginative conceptions, but these are too often skeletalized by a dogmatic theology or exploited by extreme sectarian politics.” Likewise, many readers will be left unsatisfied by Hartman’s avoidance of any serious commentary on his interest in rabbinic hermeneutics, in regards to which he merely makes passing comments on the echoes between Derrida’s playfulness and rabbinic Aggadah, then segues to lamentations about his exclusion from Jewish ritual.

The advantage of Hartman’s approach, however, is that such flat passages are passed over with conversational speed, and among his many other topics are solid appreciations of Freud, Blanchot, and Buber, a gorgeous page of musings on the practice (and inherent ethic) of pedagogy, and a heartfelt defense of criticism, specifically “the affirmative character of critique.” Hartman also recounts the rise of feminist criticism at Yale, presents a preposterous public appearance by the superstar Jacques Lacan, and—both in the text and in an appendix—remembers Erich Auerbach’s “combination of esprit de finesse and immense learning” as a model “of humanistic scholarship.”

Indeed, it is in acknowledging both his indebtedness to and his continuing awe at the achievements of others that Hartman’s book hits its highest notes, giving it a tone both of graciousness and enthusiasm. When he expresses his ongoing wonderment, for instance, at Derrida’s 1972 Glas, “a pivotal work of both philosophical criticism and art” that combined, via split columns, commentary on Hegel with commentary on Jean Genet, his response to the text will send many readers back to it. So too, his comments on how his own interest in Wordsworth has only been deepened by his inquiries into the themes and ramifications of the Holocaust, as both issues deal with trauma and the role of the eyewitness, will prompt a return to Wordsworth and the wider Hartman oeuvre. Of the many threads raised in this text, which one can only hope Hartman will develop into their own books, an idea repeatedly alluded to—how the ubiquity of news has rendered us “involuntary spectators and impotent bystanders of widespread political terror and the misery it leaves behind” and how media technology, presenting us with constant, flickering images of the so-called real, actually leads us to believe that our “individual lives are, or are felt to be, deeply fraudulent”—is most interesting.

Of course, Hartman’s attempt at “completion” on his own life and work also actively resists completion—urging, instead, continuing conversation and critical exploration. “What is unexamined is not lived,” Hartman writes, a statement that distills the underlying sentiment of A Scholar’s Tale and points to the meaning he has found in his career. There the specific work of literary criticism has intersected with ethics, politics, psychology, and theology, engaging, in the widest sense, what he calls the “religious resonance” of the written word.