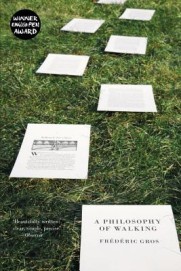 In a pinch, walking will get us from place to place, though for the most part, we hardly think about it, except in so far as distances are concerned. We ask ourselves, how far is it from the parking ramp to the concert hall, anyway?

Frédéric Gros has a different view, which he shares with us in this collection of essays examining the phenomenon of putting one foot in front of the other. Though he never mentions it explicitly, it's pretty clear that when he isn't teaching philosophy at the University of Paris XII and the Institute of Political Studies, or editing Michel Foucault’s later College de France lectures, Gros is a long-distance walker himself. A number of the essays are devoted to specific elements associated with walking such as solitude, slowness, gravity, and repetition. Interspersed with these often insightful observations, which veer off into metaphysics occasionally, are chapters recapping the lives of philosophers and poets who embraced the peripatetic lifestyle in one way or another, including Rimbaud, Nietzsche, Gandhi, and Henry David Thoreau. A few of the essays are more broadly historical, as Gros takes a look at how walking figured in medieval notions of penance (through the notion of pilgrimage) and the role played by walking in the philosophic schools of ancient times.

From the opening pages Gros makes it clear that he's not interested in walking as "sport"—an activity that involves measurement, comparison, competition, and haste. Nor is he interested in convincing us of the health benefits of walking. And as for those long narratives in which walkers recount their adventures, he notes that most of the material in such books describes events that take place when the walker is not walking.

Thus severely circumscribed, his enterprise would be a little dull, except for the fact that Gros is adept at wiggling out fine distinctions between the various physiological and psychological states that walkers arrive at on the course of a long journey. In an early chapter on freedom, for example, Gros writes:

By walking, you escape from the very idea of identity, the temptation to be someone, to have a name and a history. Being someone is all very well for smart parties where everyone is telling their story, it's all very well for psychologists' consulting rooms. But isn't being someone also a social obligation which trails in its wake—for one has to be faithful to the self-portrait—a stupid and burdensome fiction? The freedom in walking lies in not being anyone: for the walking body has no history, it is just an eddy in the steam of immemorial life.

Such reflections are followed by an analysis of how it begins to feel to the walker when "outside" ceases to be a transition zone through which to pass on our way from one event to the next, and becomes the "element in which stability exists."

Gros repeats a few stories he's heard from the lips of aged mountain walkers about the trekkers who rush pass them: "They're afraid they won't get there, wanting to walk at that speed!" And he even goes so far as to draw philosophical distinctions between the superfluous, the useful, the necessary, and the essential. He is often successful at introducing an element of poetry into his analysis, as when he writes about slowness:

Slowness means cleaving perfectly to time, so closely that the seconds fall one by one, drop by drop, like the steady dripping of a tap on stone. This stretching of time deepens space. It is one of the secrets of walking: a slow approach to landscapes that gradually renders them familiar.

And just when an element of sameness is beginning to creep into his remarks, Gros mixes things up by devoting a chapter to Nietzsche's love of mountain hiking or Wordsworth's insatiable need to walk while composing verse. These chapters have a pleasant breeziness, free of serious literary analysis or labored attempts to correlate a given temperament with a specific walking style. For Nerval, walking was a part of active nostalgia. Kant was constipated, while Nietzsche suffered from compulsive vomiting. It hardly matters. These chapters are like the interesting people we might meet on the lonely path, with whom we gladly stop to converse before returning to the monotony (and liberation) of the miles ahead.

The historical chapters work less well, perhaps because genuine walking is a matter of individual initiative, whereas the efforts being described in these chapters tend to be institutional and prescriptive. Later chapters devoted to types of pseudo-walking—the promenade and the habitual daily outing, for example—return us to the subject at hand by way of contrast. "The walker of wide open spaces," he writes, "the trekker with his rucksack opposes civilization with the burst of a clean break . . . The stroller's walking activity is more ambiguous, his resistance to modernity ambivalent." After a few more pages of analysis, in which Walter Benjamin figures prominently, Gros concludes: "The walker is fulfilled in an abyss of fusion, the stroller in a firework-like explosion of successive flashes."

At times, while reading A Philosophy of Walking, I felt the urge to dig out my backpack, campstove, and maps; at other times, I found my thoughts turning toward an unread copy of Patrick Leigh Fermor's tales of walking across Europe. But Gros's book is remarkably successful at returning again and again to a few simple points without wearing them too thin, scattering his breadth of erudition lightly here and there for variety and emphasis. And in the last chapter, “Repetition,” he feels comfortable giving a more personal touch to the spiritual dimension of walking long distances, describing at some length the psalmistry of the open road. "Walking causes a repetitive, spontaneous poetry to rise naturally to the lips, words as simple as the sounds of footsteps on the road."

Gros makes walking sound liberating, mind-numbing, fulfilling, and monotonous all at once. Is any of this really true? I can think of one way to find out.