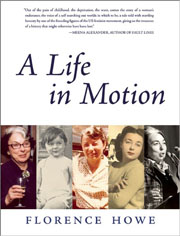 A perennial problem of modern American feminism, Susan Faludi convincingly claimed in Harper’s last year, is that it’s matricidal. Whereas in the nineteenth century, mothers—charged with being a republican force in the domestic sphere—collaborated with daughters to win rights, such bonds suffered after suffrage: within a year of winning the vote, young women were publicly dismissing mom (egged on by advertising), increasingly convinced that overthrowing the maternal past was the real road to freedom. We haven’t stopped. The risk of such a matricidal tradition, of course, is that we will forsake the wisdom of our forebears, dooming ourselves to repeat their past.

So it’s a mixed relief to read Florence Howe’s poignant memoir of coming of age as a feminist in mid-twentieth-century America during the heyday of the Second Wave Feminist revolution. Howe is best known as a founder of Women’s Studies and The Feminist Press; as a witness account of the emergence of both, this would make a worthy read. But it’s the personal story of coming into a conscious life, the struggle to forge a self, which makes A Life in Motion such a moving book. A tonic to our cultural inclination toward forgetting, the memoir is a bridge to the past, a useful reminder of how hard won and recently minted our liberty is; it offers a crucial generational link in an age when feminism has become a dirty (or worse, risible) word and popular debates rage over bikini waxing rather than equal pay—i.e., when the optimistic delusion that we live in a post-sexist era has gripped the nation.

Fortunately this is not an eat-your-peas memoir: it’s a hell of a good story, rich in remarkable anecdote, well told even as it tells us much about how the transformative fights for women’s and African-American civil rights in the 1960s and 1970s were won. The book opens on a vivid account of growing up poor in Brooklyn, daughter of a fierce if frustrated mother and a charming, depressive father who drove a cab but instructed his daughter to say he was “in the transportation business.” Beloved by a grandmother who died when Howe was young, she relates a childhood of loneliness and lack in which a friend’s feather bed seemed an exotic comfort (Howe slept on a cot in the kitchen); where she was tutored in Hebrew by her grandfather, who thanked God each day in his Orthodox prayers that he was not born a woman; how she mysteriously contracted a vaginal infection and spent ten months in a hospital, released only when she began to menstruate. Parts could have been written by the Brothers Grimm.

In America, we are fond of the myth that we can grow up to be anything, but few books reckon with how costly success can be, how much of one’s family one must forsake, how lonely and difficult the journey often is. Howe’s does; her frank assessment of the struggle to claim her life—not only from patriarchy but from personal doubt—is the book’s true heroism. Urged to attend graduate school, she remains convinced that she is meant to be no more than a school teacher; having excelled at graduate school, she declines to finish her dissertation in favor of following her husband’s career; offered a chance to write for the New Yorker, she squanders the opportunity in a collaboration with a male lover; invited to apply for the position of president of Bennington College, she insists on splitting the position with her husband, who refuses the position at the interview, nixing her shot at the job. Over and over Howe declines opportunities, thwarted by patriarchy but also by a psychology that will be deeply familiar to many ambitious women (or anyone who’s seen the movie Black Swan). How to succeed without betraying those you love?

The book strives to encompass the whole of Howe’s life, from her Brooklyn childhood to her work as publisher of The Feminist Press. It’s an ambitious undertaking, and important at a time when many take women’s rights for granted. Running almost 600 pages, the book is helpfully structured into four sections: A Family Girl, about her early childhood; The Care of the Future, about her studies at Hunter and Smith, her four marriages, her father’s suicide, and adoption of an African-American daughter; Work That Changed My Life, about becoming a founder of women’s studies and The Feminist Press and its development multiculturally and internationally; and Friendships Into Family, comprising portraits of her mother, friendships that have sustained her, and members of her chosen family. Along the way, she usefully reveals the role Civil Rights played in developing women’s studies and how feminists excavated women’s lives and forged their own.

A Life in Motion founders, however, when Howe relinquishes chronology in favor of thematic chapters on her marriages, her father’s suicide, and her daughter’s adoption. The loss of chronology ultimately muddles meaning, obscuring how personal events informed political and professional choices. She mentions connections among these, but doesn’t mine them fully. Later, the intimate tone of the book’s first half gives way to important but less gripping documentation of the evolution of The Feminist Press and women’s studies, in an account that is historically significant but feels at times like a feminist rendition of Biblical begats.

Howe is well known as an editor, so it’s hard not to wish that she’d had a better one. Gripping as the book is, it could easily and profitably have been two: one a history of The Feminist Press, the other a powerful memoir of coming of age and into political consciousness as the nation was coming into post-war power. It’s also hard not to notice Howe’s own matricidal moments. She blames her mother and female teachers for impeding her progress, for convincing her early on that she could aspire only to teach school, that she hadn’t a creative bone in her body. Men will do far worse, but these women’s voices frame the story, providing the opening coordinates, against which New Yorker editor William Shawn stands as an emblematic man inviting her into a larger world. It would be an oversimplification to suggest that this is the fulcrum on which the book pivots, but it’s hard not to notice when the pattern repeats. Despite her powerful bonds with women, in the most powerful and intimate early chapters, the blame is often laid at female feet.

One is left to wonder what Howe might have written, if in addition to nurturing other women’s voices, she had nurtured her own. “Half a lifetime ago . . . I began to see the Feminist Press as a way into a lost history,” Howe writes of the press that would help recover remarkable stories of women’s lives; Howe’s book is a luminous contribution that helps light the way back so we can see how we got here and how much has been gained, how much there is to lose, and how we—mothers and daughters, second- and third- and fourth-wave feminists, here and abroad—might yet manage to go forward together.