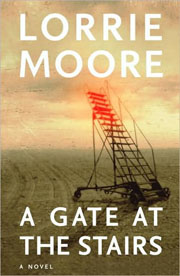 In the climactic scene of A Gate at the Stairs, Tassie Keltjin tries to get back to her parent’s farm home by taking a treacherous night drive on her Suzuki motor scooter. Author Lorrie Moore’s mental Suzuki attempts the same thing by driving backwards to pre-Iraq-invasion America, the folly of which Tassie implicitly acknowledges by noting a stern law of metaphysics—“You can never go backwards. Though scientists tell you that you can. No information can escape from a black hole.”

A self-described “disabused romantic” and arguably our most humane satirist since Malamud, Moore skewers the bellicose and deluded, wielding fate’s fickleness and kindly noting its cruelty. Furthermore, she enters and escapes Tassie’s deepening black hole of a life without gratuitous bloodshed, which too few novelists seem able to do (though the book does include a memorable steak knife-to-Karl Rove fantasy). A Gate at the Stairs actually circumnavigates John Updike territory, with a distinct reversal—rather than the child of a New England suburbanite, Tassie is a 20-year-old Wisconsin potato farmer’s daughter working and studying in the city. Yet a suburbanite’s loneliness lingers in this fictional college town modeled on Madison (where the author lives and teaches), here renamed as the famously duped city of Troy.

After restaurateur Sarah Brink hires Tassie to nanny her adorable mixed-race adopted child named Mary Emma, Tassie falls for a suave Brazilian who’s not what he seems. There’s some kinship here to Updike’s surprising late-career novel Terrorist, but in A Gate at the Stairs the worst victims of this subplot are love and faith in the promise of multi-cultural relations. Sarah runs the tony Le Petit Moulin, while mainly running away from her relationships. After allowing Tassie to handle much of Emmie’s crucially formative period, Sarah gives the child up with stunning equanimity when the agency reclaims her due to “withheld information” regarding Sarah’s secret past.

Sarah concludes she’s an inadequate mother for the challenges a mixed-race child faces. With Mary Emma gone, she almost predictably divorces her husband to go back to her home in New York. She no longer loves this compulsively flirtatious, typically abstracted scientist, the kind many women pragmatically “settle for.” Sarah’s dissolving act is moving because Moore has made us care about her. The author has admitted that her own unanticipated struggles as a DWSM (divorced working soccer mom) kept her from finishing this novel sooner; her experience surely fueled painful insights into fragmented nuclear family life.

One also almost feels sorry for Edward, the seemingly clueless husband. After Sarah leaves him, Edward calls up Tassie and suggests that she taught him there is “no such thing as wisdom . . . But there is lack of wisdom,” a sort of reductive cop-out Zen-ism embedded in a romantic overture. Tassie, who has learned some things in college, won’t settle for that. Moore’s final witticism is an example of her rare emotional power—a corny-yet-apt pun on Edward’s name, conveying Tassie’s desperate sense that human connections are no more stable than the caprices of weather. This sort of laugh-it-off queasiness often surfaces in Moore’s writing as an inlet to reality. "Bury your unrealistic dreams or they will bury you," Tassie says, and it's a punchline that works.

Moore’s picaresque journey is packed with a flask of 80 proof satire that often fires up tears of bitter ambivalence. Her comic insight peaks in the dazzling glare of several extended tour de force passages quoting uptight parents of mixed-race children, and she deftly pours out a trail of bickering splutter reeking of American racism and political correctness, sometimes in the same person. By contrast, Tassie’s friendship with her roommate is the book’s most satisfying relationship. Our heroine plays a translucent bass guitar “like Jack Bruce of Cream” and “Murph” plays a xylophone that Sarah left behind. They jam merrily while the storytelling bubbles with hip musical references and sauciness: In trying to write a song lyric, Murph pauses to ask: “Is it clitoris or clitoris?” “It may depend on which you have,” Tassie responds.

r comparatively hardscrabble life easily overtakes Sarah’s sad yuppie story, and culminates in a Marx Brothers-like stunt that touches the desperate desire for familial redemption. Yet ultimately this is Tassie’s book, and one senses that, like Updike’s haggard Rabbit Angstrom, she may be a character we meet again. Readers will want to keep following Tassie, wherever her kooky Suzuki takes her.