(And how to be sure it won’t happen again!) 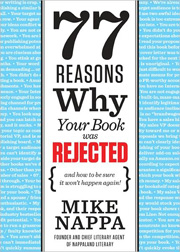 Kathryn Stockett knows the sting of rejection. According to a July 2009 article in The Telegraph, Stockett’s manuscript for The Help was rejected at least 45 times before it became a bestseller. Her perseverance paid off, but Stockett may have appreciated Mike Nappa’s new book, 77 Reasons Why Your Book Was Rejected (and how to be sure it won’t happen again!).

With more than twenty years of publishing experience, Mike Nappa knows all angles of rejection. From the first page of 77 Reasons, Nappa dismantles any romantic notions of the publishing industry, declaring it takes him just 60 seconds to reject a book proposal. Nappa isn’t being cruel; he’s simply sharing wisdom gained from slogging through slushpiles. “First, foremost, and always,” Nappa writes, “there is actually only one overarching reason why any book is published—or rejected: Profit.”

77 Reasons is divided into three sections: editorial, marketing and sales reasons for rejection. Some reasons are apparent (“Your Writing is Crap”) while others may be surprising (“You Are Not a Celebrity”). Each reason is clearly explained and followed by at least two solutions for overcoming it. As such, 77 Reasons becomes a sort of condensed, actionable amalgam of William Zinsser’s On Writing Well and the annual Writer’s Market guide.

With a natural and conversational voice, Nappa delivers home truths with mentor-like honesty, provides encouragement with avuncular warmth and even humor. For example, when Nappa describes how failure to do one’s research could lead to insulting an editor, he channels Homer Simpson: “these insults are unintended,” Nappa posits, “but the result is still the same—another ticket to Rejection-ville.”

Nappa’s approachable tone supports the greatest strength of 77 Reasons: establishing realistic expectations. The book’s subtext is that writing is hard work with elusive reward. “Too many people like the idea of ‘being a writer’ more than they like doing the work of a writer,” Nappa observes. “Make sure you are someone in that second category and not the first.”

There are aspects of 77 Reasons that do not work so well: some readers may find Nappa’s repeated self-deprecation disingenuous, and while he insists prospective writers practice impeccable grammar, Nappa himself falters at times with subject-verb-pronoun agreement, as in “the sales department says they [sic] can’t sell your book.” But perhaps the book’s biggest flaw comes when Nappa encourages would-be authors to learn about sales channels by interviewing a retail book buyer. There’s certainly nothing wrong with that, but Nappa advises readers to invent a fib to secure the interview: “Tell the secretary you’re doing research for an article for your website or for a report for your writer’s group.” Why he doesn’t suggest telling the truth (e.g. “I’m an aspiring author and I want to better understand the industry”) is puzzling, especially since everywhere else in 77 Reasons, he promotes honesty and transparency.

That blunder should not undermine the entire book, however; 77 Reasons is far too useful and it’s obvious Nappa writes with heart. Will 77 Reasons put off some would-be writers? Yes, but as Nappa asserts, “If I can talk you out of pursuing a writing career, then you don’t belong in publishing.”

Getting a book published is hard. Mike Nappa’s book makes it clear just how hard. But remarkably, his book might make it easier, too.