Blanchfield was joined by Minneapolis poets Juliet Patterson and Paula Cisewski, also both poets who are working on autobiographical prose books, for a conversation moderated by Rain Taxi editor Eric Lorberer and peppered with readings from their works. After the event the crowd enjoyed crostini during the book signing, and a splendid time was had by all.

The award-winning poet from Duluth, MN presented her new book Rival Gardens: New and Selected Poems (University of Nebraska Press) to an enthusiastic crowd in Minneapolis. The event was sponsored by Literary Witnesses, with co-sponsorship provided by Rain Taxi and the Loft Literary Center.

Hell, I Love Everybody:
A Celebration of James Tate 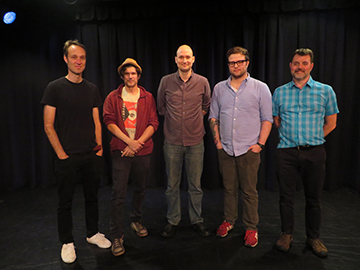 As part of the first Lit Crawl, Rain Taxi invited five local comics artists to present their work to an appreciative yet judgmental audience (sailing on the literary cocktails designed for the occasion by BLB bartenders) for prizes. The fight to the finish included the amazing talents of Will Dinski, Rob Kirby, Anders Nilsen, Zak Sally, and Jordan Shiveley. 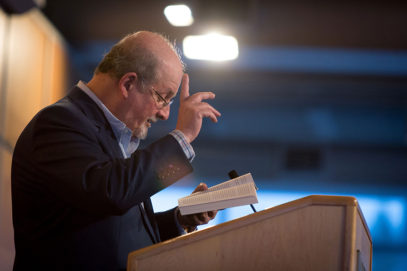 Salman Rushdie reads to the audience. Photo by Jennifer Simonson.

The esteemed Sir Salman Rushdie read to a sold-out crowd from his newest novel, Two Years Eight Months and Twenty-Eight Nights, thrilling the audience with a very exuberant and charismatic reading. Mr. Rushdie took questions from the enthralled audience and stayed to sign copies of this books. A limited edition letterpress broadside of an excerpt from Two Years Eight Months and Twenty-Eight Nights, signed by the author, was printed and is available for sale HERE.

Rain Taxi was proud to participate as a Charitable Partner at the 2016 Uptown Art Fair. While art lovers perused the booths, they were able to learn about Rain Taxi's many programs, pick up a free issue, and participate in creative activities like writing What I See poems with poet John Colburn, receiving a Poetry Tarot reading and poem from Paula Cisewski, draw Jam Comics with Ursula Husted, and create erasure poetry.

Another great Festival in the bag! See our recap HERE.

A lively and moving reading by poet great Laure-Anne Bosselaar wowed the audience at Plymouth Congregational Church. Bosselaar read from new and past work, as well as a poem by her late husband Kurt Brown.