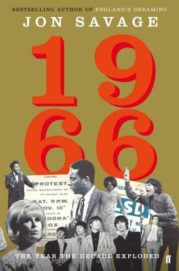 To be clear: the explosion Jon Savage wishes to celebrate in his new book occurred in England and America. What blew up was youth culture, and the explosive used was primarily pop music, which served as catalyst, mirror, and running commentary on the events of 1966—the year when innocence was “replaced by experience and, whether anyone liked it or not, there was no going back,” the year when “partying—and pop—began to become political,” the year pop music metamorphosed into something new and “rock began,” a year of “audacious ideas and experiments” that were “no longer just an industrial process but the principal expressive form of the new massed youth society, and as such freighted with demands and ideas that would prove impossible to contain within the confines of a Top 40 chart or even a single. It was no longer pure commerce and simple good times, but the sound of a new freedom and a generational confidence.”

Despite the claims just quoted, Savage—whose previous work includes England’s Dreaming: The Sex Pistols and Punk Rock and Teenage: The Creation of Youth, 1875-1945, as well as feature and documentary films—chooses to focus on 45s, not lps, and usually on singles that charted. Moving, very loosely, month by month through the year, Savage attempts through the first nine chapters to organize his material topically. Thus, “January” (chapter one) describes the pervasive fear of nuclear war, the Campaign for Nuclear Disarmament, and the folk-music protest against imminent annihilation. The less clearly focused “February” is devoted to the teen psyche (with special attention to the Rolling Stones’ “19th Nervous Breakdown”), the rise of youth-oriented media, the mods and the heyday of Swinging London; “March” to the Vietnam War, “April” to LSD, and so on. By the end of the year, Savage has covered civil-rights activities and the rise of the Black Panthers, the Watts and Sunset Strip riots, clothing fashions, the London club scene, gender politics, the first stirrings of the gay-rights movement, dozens of songs and singers, and much more. The book includes an extensive-month-by-month discography, and a two-cd compilation of songs mentioned in 1966 is available from Ace Records.

The problems with Savage’s organizational plan should be obvious. The folk-music boom, fear of the bomb, and the CND (January’s focus) all began considerably before 1966 and consequently require pages of backstory, as do many other topics. Nor does tying a topic to a particular month prove helpful, for this frequently requires jamming off-topic or off-month material into each chapter. The topics themselves are initially assigned to months according to when an appropriate song hit the charts; hence, March deals with the Vietnam War only because that is the month Staff Sergeant Barry Sadler’s “Ballad of the Green Berets” reached #1. Coupled with the author’s penchant for digression and his fondness for details, however trivial, the book’s thesis—that by year’s end “almost all the ideas and attitudes that would define the remaining years of the decade are in place.” smoldering and ready to detonate—is often obscured. Another organizational problem results from the decision to cover both England and America, for not all issues affected the young of Britain and America equally; thus, Vietnam and civil rights belong to the U.S. whereas the club scene, music magazines, fashion, and other topics are covered as they existed in London; we read often, for instance, about Britain’s televised music programming (Ready Steady Go! and Top of the Pops) but find hardly a mention of the American equivalents (American Bandstand, Where the Action Is). And because he is working from afar, Savage’s picture of American youth dwells almost entirely upon what was going on in Los Angeles, San Francisco, and New York.

After more than 500 pages of assorted fireworks, there is, disappointingly, no grand finale, the book ending not with a bang but a muffled implosion. A “prophetic minority” of the decade’s young—the “consciences of their time”—may have lit a fuse, but the year sputtered to its conclusion. Near the end of 1966, Savage quotes journalist Maureen Cleave, writing in London’s Evening Standard on 29 December 1966: “The pop singers themselves have grown old; their faces on television look old, world-weary; bored faces that have seen it all. The future is bleak . . .” Two days later, the situation was bleaker still by Savage’s own account:

In the evening of the 31st, The Monkees premiered on BBC TV at 6.15 p.m., following Doctor Who. In the new US chart, the group was at #1; at #2 was a novelty record, ‘Snoopy and [sic] the Red Baron,’ by the Royal Guardsmen. The highest climber in the Top 10 was Aaron Neville’s soulful ballad ‘Tell It Like It Is,’ with the Temptations’ equally wracked ‘(I Know) I’m Losing You’ one place below at #8. In Britain, ‘Green, Green Grass of Home’ was still at the top, with Donovan’s ‘Sunshine Superman’ at #2.

Despite all this grousing (remember, Mr. Savage, what Dylan sang: “They’ll stone you when you’re tryin’ to write a book”), I wish now to change my tune, for 1966 overcomes its organizational problems by being immensely readable, ambitious, fast-paced, and provocative. For those who lived through the year and were alive to its events (from the Vietnam War to Twiggy, Andy Warhol’s Exploding Plastic Inevitable to the march on Cicero, Illinois), there is much here to learn or to remember, whether fondly or ruefully, just as there is no end of memories and informative tidbits to be had in Savage’s comments on the year’s musical accompaniment. Although he doesn’t say so, Savage reminds us that the more things change, the more they remain the same, for whatever comfort that is worth: Charles Whitman gunning down forty-nine people (killing sixteen) from a tower on the campus of the University of Texas at Austin; riots erupting in the Hunters Point neighborhood of San Francisco after a white policeman shot and killed a black teenager; people “taking a lot of drugs because they didn’t want to see.”

Savage’s extended commentaries on individual songs—John Lennon’s “Tomorrow Never Knows,” James Brown’s “Tell Me That You Love Me,” Norma Tanega’s “Walkin’ My Cat Named Dog”—are astute and convincing; like Dylan’s “Rainy Day Women #12 and 35” or Junior Walker’s “Road Runner,” “all spoke of a new confidence and freedom, that you could try anything and it might work.” Savage will remind you of things you haven’t thought about for a long, long time: Dave Dee, Dozy, Beaky, Mick & Tich. “Psychotic Reaction.” The mining disaster in Aberfan, Wales. The album cover that bloodied the Beatles. Similarly, he shares facts and ideas that will likely be new to many readers: that Lou Reed avoided the draft by “exaggerating . . . mental instability.” That the first gay riot occurred at Compton’s Cafeteria in San Francisco’s Tenderloin. That by the fall of 1966, camp had become “a method of navigating a schizophrenic consciousness.” That the Who’s “I’m a Boy” went “straight to the deep disturbance behind high-sixties androgyny.” That Chris Kenner’s “Land of 1000 Dances” “sourced an old southern spiritual.” That Sony Bono released a “vérité” recording of the Sunset Strip riots entitled “Sunset Symphony,” a “confused montage of chants, loud-hailers and shrieks.”

1966 is wide-ranging and, to be fair, far more coherent than the chaotic, eventful months it brings into kaleidoscopic focus. For anyone with any interest in its subject, the book is both informative and enjoyable. The research that went into the book is impressive and thoroughly documented. Whether Savage is discussing how pop music helped change gender expectations or closed “the gap between the avant-garde and the mass market,” he will doubtless send most readers more than once to the Internet—to find and watch Peter Watkins’s docudrama The War Game or to listen again to Dusty Springfield or the Bonzo Dog Doo-Dah Band, to read more about James Meredith’s “March Against Fear” or to try to remember just what was so darn special about Nico.

Was 1966 “the year the decade exploded”? Well, you pays your money and you takes your choice. Two recent books—David Hepworth’s Never a Dull Moment: 1971—The Year That Rock Exploded (Henry Holt, 2016) and Andrew Grant Jackson’s 1965: The Most Revolutionary Year in Music (Thomas Dunne, 2015)—argue otherwise. Other years—1963, 1968—were deadlier, bloodier, and more fraught with legislative and activist consequence. Certainly, however, 1966 was a year of explosive music—political, introspective, exploratory, psychedelic, soulful—and if the year ended quietly, that was only because the guns were being reloaded. The last of the smoke having cleared a while ago, it is worth looking back on one of the more exuberant and divisive worlds we have lost. As he spins the months of that year, Savage proves an enthusiastic and energetic deejay.