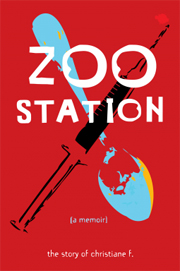 Zoo Station is a paradoxical of coming-of-age story. As Christiane F. grows up in housing projects of divided late 1970s Berlin, this intelligent young woman grows increasingly degraded by heroin addiction and prostitution. By the end of the book, Christiane is fifteen and has shot up nearly every morning for a year. The majority of the book details the worst period of her addiction when, as her most recent publisher stresses, her needs were not only chemical, but also social and emotional.

First published in Germany in 1979 with the aid of two journalists, the book was met with the immediate interest of German teenagers. Print success spurred its 1981 movie adaptation. David Bowie, the star of Christiane’s record collection, supplied the soundtrack (his first), thereby ensuring the film a cult status that it enjoys to this day.

Zoo Station is a new translation of the German original. Christina Cartwright explains in her translator’s note that she updated Christiane’s slang to American English in an effort to “hone the edge that is present in a lot of her commentary.” By this measure, she is successful: the book reads as the speech of an occasionally foul-mouthed, but genuinely intelligent and perceptive teenager. Additionally, Cartwright includes footnotes that help to situate an American reader possessing little to no knowledge of post-World War II Europe. The book’s editors append the work with a list of resources available to teenagers struggling with drug addiction and sexual violence.

All this is to say that one must nearly read around this repackaging of Zoo Station to grasp that it is a book intended for teenagers. Zest Books’ approach values storytelling over the rhetoric of prevention, and as a result, the book is a startling contribution to the genre of the young adult addiction story. American writers have most memorably treated these stories in fiction, but often at the expense of believability. A 1998 New York Times review by Mark Oppenheimer pans 1971’s Go Ask Alice and two addiction novels of the ’90s, writing:

I do not think children should read about heroin addiction. But if they must, it is a moral concern that the book be well written. A good war movie makes you despise war, a terrible one makes you grin, but a mediocre one might send you to the recruiting office. Producing literature that keeps children from shooting up is possible only if the writing is fresh and skillful, never trite.
(from “Just Say ‘Uh-Oh,’” November 15, 1998)

Zoo Station, a memoir, succeeds by Oppenheimer’s rubric; its nonfiction approach delivers the familiar narrative of a teen’s progression from “gateway” to “cooler” hardcore drugs without a trace of triteness. To make the most value-free assessment possible, Zest’s editorial and marketing decisions assume that today’s young adult readers are just as if not moresophisticated than the parents of Christiane’s generation.

It’s a fair point: today, largely through the educational and preventative efforts concentrated upon them, drugs are ubiquitous to even the most sheltered of American teenagers. (Christiane, however, only learns of drugs in social environments; her public school seemingly has no agenda other than filling itself to maximum capacity.) Contemporary educated American readers can therefore dispense with the propagandistic dross and appreciate Christiane’s damning critical insights.

Consistent with the recent trend in young adult literature that represents adults as either helpless or helplessly corrupt, Christiane describes a family and a community that are incapable of helping those who are young and addicted. This indictment extends to the structures of the German educational system and the private capital interests that shaped her corner of Berlin. Down to the signs posted about the housing project that all but forbid children from playing, her environment fails her. But Christiane’s sense of general disappointment is well tempered by her sense of personal responsibility.

Perhaps the most odious and most improbable of all the tropes that Oppenheimer describes as common to the young adult addiction novel is the unintentional first exposure. But Christiane consciously chooses her substances and her johns; she persists despite her friend’s attempts to deter her from heroin. “Despite what the newspapers always say, it wasn’t like I’d been victimized by some evil dealer or seduced by a junkie,” she explains. “It wasn’t at all the case that I’d been turned into a heroin addict against my will. I don’t know anyone who’d been forced to shoot up against his will.”

Zoo Station is a book with a strong commitment to honesty—even if honesty is boring. Chasing Christiane as she repeatedly chases her fix, shoots up, recovers, and relapses is often discouraging to the point of boredom, but it treats the drug problem in the terms that Jürgen Quandt, the director of a local protestant youth outreach center, is happy to see Berliners embracing: “as it really exists, instead of how we’d like to imagine it.”