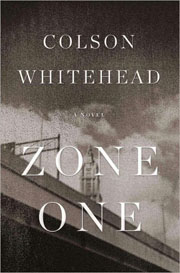 By his own admission, Colson Whitehead—MacArthur genius, Whiting winner, PEN/Faulkner finalist—is uncomfortable saying the word “zombie” fifty times a day. He’s “getting used to it,” he told Terry Gross. He’s saying it to the New York Times and he’s saying it to NPR and he’s saying it to audiences across the country on his book tour to promote Zone One, his well-marketed zombie apocalypse novel, published in hardcover to much fanfare in October.

Reviewland consensus is that Zone One is a literary treatment of a popular theme, which is shorthand for “beautiful language, no plot.” True, and true. The novel follows a narrator named Mark Spitz, a man whose dominant trait is his mediocrity. Working on reconstruction, Spitz’s job is to sweep an area of lower Manhattan clear of leftover zombies, work that requires floor-by-floor and room-by-room attention: busting through doors, exterminating anything that moves, and clearing out corpses in body bags. The novel takes place over three dreamy days, most of which passes deep inside the narrator’s rambling head. Whitehead’s strength is not the forward propulsion of narrative; rather, it’s his ability to build a novel out of a slow, obsessive circling, unpacking an idea piece by piece, setting each piece on the bureau, and looking at it with ironic distance. Whether the reader likes the approach is largely a question of taste.

Here’s a more interesting question: Why, after 270-some pages of considered exploration of zombie disaster and its accompanying ennui, is Whitehead just now “getting used to” the word “zombie”? There’s no simple answer. If asked directly to explain the Fresh Air quote, he would probably back-peddle a step or two and reframe the question. He could offer, as he did in a Harper’s Q&A, the aesthetic notion that “The world is a junkyard—take the parts you need to make the machine work the way you want it to.” Or he might reply, as he wrote on his web site, that “I like my zombies like I like my women: slow and implacable.” He might even establish his zombie cred by listing his fan-boy badges—comics devotee, George Romero fan, nightmare dreamer, apocalypse voyeur.

Here is the battleground, then: On one side, those in the mainstream literary establishment—from reviewers to blurbers to marketers to publishers to fans—are defending their turf and waving their flag on behalf of Literature-with-a-capital-L. On the other side, the genre establishment is either failing to take notice—there are no reviews of Zone One yet on some major science fiction websites—or is lashing out at the novel’s slow and implacable approach. And in the middle stands the novelist himself, with one foot in each camp, saying “I wrote a zombie novel, damn it,” and “Forgive me for writing a zombie novel, please.” It’s an uncomfortable position to be in. Nobody gets tenure—or the MacArthur—by writing zombie novels.

The fact that American letters maintains a genre ghetto points more to the failings of our high-brow/low-brow cultural hierarchy than it does to the readers, writers, and fans of literature, in all its various forms. No serious reader dismisses a work of fiction based solely on its setting or theme, just like no serious writer turns away from the fission of culture, self, and idea at the core of every sustaining novel. Writers make and remake our forms. Examples of this, the highest practice of art, abound, from José Saramago’s Blindness to Justin Cronin’s The Passage, from Victor LaValle’s Big Machine to Cormac McCarthy’s The Road. We devour the structures and concepts of our influencers, and, if we’re good, we digest and assimilate them, making them our own. As Colson Whitehead knows, there’s a little bit of the zombie in us all.