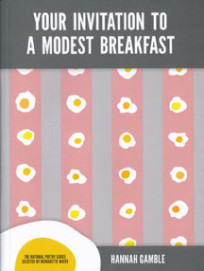 Hannah Gamble’s first book of poems, Your Invitation to a Modest Breakfast, was selected by Bernadette Mayer as a National Poetry Series winner. Told in three sections with a wide breadth of lyricism, the poems focus on gender, family, and the idea of aging, with a consistent reflection on relationships. The poems are engaging, thought provoking, and beautifully calm, with a dash of pensive regret.

Gamble’s poems are not breezy introspections, and reveal a signature combination of absurdity and pathos. Take “Everything That’s Alive Stays That Way”: “I asked my neighbor later / what it had been like to be alive before a time of war, / and he said it was funny / we even have a word for it, because everything / that’s alive stays that way / by tearing heat from the belly.” Although the tone does oscillate a bit throughout the book, her primary subjects seem never far from thought. In “Cocktail Party,” an absent father navigates to the poet’s mind: “The last time I saw my father alive / he was on his way to a cocktail party, wearing a tie / . . . just like the first time he went to a Rock & Roll Concert, / and his mother made him wear a three-piece suit.”

Contemporary poetry often spends too much time reflecting on the poem, the idea of the poem, the process of writing a poem. This is a danger that Gamble circumvents with her cleverly spring-loaded syntax in “Biotic/Abiotic”: “You moved around / me like a plastic daisy / on a plastic stem, spinning / in your yardwind. We never really / got it together. / . . . / I prefer poems, / but I understand that their human swell / is often troubling.” She continues to handle this topic masterfully in “How Early to Wake”: “Even when I was not being / a poet, I was deciding how early to wake— / how early to begin the business of approving / and disapproving of the shapes / I’d let my person take.”

The secret to Hannah Gamble’s charm lies in her uncanny ability to hold reality and a quiet, seemingly commonplace sadness squarely in her binocular-like vision. Her poems of quirky self-admonishment and effective disengagement are delivered in a style whose dizzying effects you are not likely to forget.