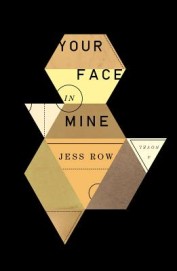 Jess Row’s fiction Your Face in Mine is a work about many things—perhaps far too many things! On one hand, it is the story of growing up and moving away from childhood connections, while still being pulled back into those adolescent roots. It’s the tale of a great dying American city, in this case Baltimore. It’s a tale of love found, lost, and possibly rediscovered. And, most importantly, Row’s work, as Richard Price describes it, “is a Swiftian fantasy of racial reassignment surgery.”

Having so many things on his mind—the fiction is also a kind of encyclopedic cataloging of various musical songs, a compilation of international languages, in some instances a menu of world cooking, and at times a somewhat academic recounting of Chinese poetry—Row also creates characters who are variously attracted to other cultures and people of other races, and who have dark secrets they are attempting to hide. On top of this, the author employs various genres of writing, including satire, critical essay, quasi-scientific disquisitions, taped interviews, dialogues with the dead, computer chats, travelogues, and op-eds. Incredible coincidence is attributed to the Buddhist notion of the inevitability of meeting everyone at least twice in your life. In short, this literary stew ought be a kind of unholy mess, and, at moments in its ambitious reach, it almost plunges into narrative chaos, particularly when we are expected to engage with long passages concerning characters (a teenage friend, Alan and the narrator’s wife, Wendy) who are dead even before the work begins. Yet Row has somehow managed to create a work that feels torn from the pages of today’s headlines, which makes this fantasy, in turn, nearly impossible to put down.

The author certainly could not have imagined when he set out to write Your Face in Mine that the very problems he details about Baltimore would be magnified and carefully explicated only a few months later in the daily news with the death in police custody of Freddie Gray and the following nights of rioting; nor might he have known that many of the same Baltimore locations that he describes in detail in his fiction would soon flash out across television screens while news commentators mouthed many of the same sentences about the city that his characters express.

Even more startling, Row could never have entertained the idea that a seemingly black woman working for the NAACP, Rachel Dolezal, would be discovered to be of only white ancestry, expressing that she identified as a black woman in much the same way as a central character in Row’s book, Martin Lipkin (later known as Martin Wilkinson) describes his condition: “Racial Identity Dysphoria Syndrome.” Could Row have guessed that his fictional Bangkok doctor, Silpa, who had previously operated on transgender individuals, might be a topic of national discussion after the less radical transformation of super-athlete Bruce Jenner into Caitlyn? Might Wilkinson’s gay father have been saved from his death by the marriage this year made legally possible for all gays and lesbians? If nothing else, one has to admit that Row had his finger on the pulse of issues of identity that would surface in the American consciousness in 2015.

I won’t even begin to attempt to relate the fiction’s various intertwined threads of plot. Let us just state that, years after growing up in Baltimore, and after living in New England, China, and elsewhere, the work’s narrator Kelly Thorndike returns to work in his home town of Baltimore at a dying radio station. Soon after, he accidentally (?) reencounters a former school mate, Martin, with whom he had once played in an amateur band. The shocking thing about their encounter is that Martin, once a white man, is now thoroughly black, a man well ensconced in city politics with a beautiful doctor wife (also black), lovely children, and an obviously wealthy lifestyle.

Martin, it appears, is determined to reveal to the world that he has undergone months of surgery, dialect study, and cultural assimilation to attain his new identity, and chooses his former high school friend Kelly to write up the narrative. Gradually, Kelly and the reader together discover that behind Martin’s personal messianic-like zeal for the possibilities of a new life, his real goal is not only to offer a service to wealthy customers throughout the world that would allow them their personal decisions regarding race, but to make millions of dollars in the process. Accordingly, although we may first hope that Martin sees his own transformation as a kind of moral position which might ultimately change everyone’s notion about race by offering nearly anyone who could afford it the possibility of racial transformation, we soon grow to perceive that behind any social pretensions, he is simply a voracious entrepreneur.

Gradually Kelly discovers that his “friend” not only has no moral compunctions, but is subtly bribing him through Martin’s knowledge that on the day their mutual friend, Alan, overdosed with drugs, Kelly was with Alan, and therefore might be subject to possible imprisonment as an accessory to the death. Shockingly, even when Kelly discovers that he himself may be part of a larger plot in which Martin will encourage the Chinese-speaking Kelly’s own transformation into a Chinese exemplar of Dr. Silpa’s surgical skills, he nonetheless maintains his relationship with the now clearly evil entrepreneur, the novel ending with Kelly’s joyful entry into a new world of his own choosing.

In other words, Row clearly realizes the moral and ethical arguments that are sure to be raised (and in Dolezal’s case already have been raised), but suggests that when desire is involved, even these barriers will ultimately be overcome. There is, accordingly, a kind of strange cynicism in this work, mixed with an even odder sense of hope and possibility. And although some of the issues Row raises seem nearly absurd, they also appear to be almost prophetic. One can surely see a time, in a world in which gender has already become a choice, and in which numerous countries have come to accept same-sex marriage and other gay and lesbian equalities, that the final issue, perhaps, will be race, and that, ultimately, the possibility of transformation may be a reality.

I find Row’s work funny at times, outrageous at moments, troubling, even disgusting—but utterly fascinating and oddly appealing. What might it mean to us if race were a choice instead of simply a fact of birth? While Row’s work might remind one of dystopian classics such as Aldous Huxley’s Brave New World, Ray Bradbury’s Fahrenheit 451, and George Orwell’s 1984, Your Face in Mine ends, instead, on an entirely positive note, with the reconfigured Kelly, now a Chinese man, arriving on Chinese soil.

Even the idea of home, we are reminded in this brave new world, is a human construct.