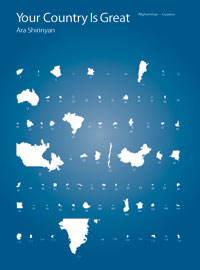 Ara Shirinyan’s Your Country is Great: Afghanistan—Guyana is an exercise in how to say nothing about a place—a testament to the self-defeating potential of descriptive language. Take, for example, these lines about Germany: “The atmosphere in Germany is great / and it’s just like Africa here—” or these lines about Greece:

Shirinyan created these poems using a list of the world’s countries and typing “[country] is great” into Google. He crafts the poems by tweaking, ordering and lineating the results, but preserves idiosyncrasies such as sentence fragments, misspellings, and chatroom shorthand. For countries that landed no Google results—Burkina Faso or Central African Republic—he leaves the page blank.

Typing “[country] is great” into Google brings up predictable results from (mostly American) tourists, but it also brings up results that concern the immense problems a nation faces. Shirinyan exposes this contrast by placing real problems such as hunger, poverty and lack of resources next to the self-absorbed reflections of tourists:

Guatemala is great—
not quite as cheap as Thailand,
but laid back.

Some poets use repetition to tease a word and pull out its multiple functions, but Shirinyan uses repetition to deaden meaning. He reveals the bankruptcy of the word “great” and other words, such as “cool,” “friendly,” and “different” that get repeated frequently in vapid accounts of living abroad and encountering other cultures.

Shirinyan keeps a cynical distance from the voices he culls, which range from the blind enthusiast (“CROATIA IS GREAT!!!!!!”) to the tentative bore (“El Salvador is great, but / I think I’m ready to go / back to the states”) to the special interest writer (“‘living’ in Belgium is great, / although the deathmetal scene is/ not that big over here”). He attacks lifeless tourists, self-aggrandizing adventurers, bourgeois patrons of water sports and prostitution, and the banal conversationalists of the blogosphere. What saves the book from being overly scathing is its sense of humor. Yes, the Internet has leveled all things, allowed us to flaunt our lazy attempts at communication, and encouraged the overuse of exclamation points and emoticons, but the results are often hilarious:

BERMUDA IS GREAT
Robbie Williams is so hot.
So is Johnny Depp
and Orlando Bloom.
Disneyland is so much fun.
Having partys with my friends is so cool.

There are also instances of surprising language that emerge from the sea of predictable sludge: “I remember ‘the lion feeling’ years ago,” or “Gibralter is great for main street / and the monkeys,” lines that sound like—dare-I-say-it?—poetry.

This is found language, but the poet’s hand should not be underemphasized. Shirinyan molds these poems just enough, preserving their arbitrariness and non-sequiturs but also arranging them in ways that make them feel rounded and complete with particular attention to finishes: “A swimming pool with / no bodies Is a problem that we can fix.” He also uses repetition and line to create refrains and percussive rhythms:

France is Great
and the rest of the World Stinks

France is Great
and the rest of the World Sucks

Often the lines are short and choppy, reflecting the overly simple and bumbling ideas they express. Some of the poems, restricted as they are to Google search results, are a bit too fragmentary. The strongest ones are the ones that hold together, like this one:

but since it’s progressing so fast,

This poem is particularly humorous against the backdrop of overdone enthusiasm found elsewhere in the book. Lack of conviction is the constant, and the most “enthusiastic” parts (marked by caps and exclamation points) sound as empty as the doubts.

One does not finish Your Country is Great having learned anything useful about the nations of the world, but one might come away from it thinking about the relationship of tourists to foreign lands, the exhausted state of travel writing, or the equalizing (and negative?) effect of the Internet on discourse. Shirinyan’s book invokes a response that is a mixture of highbrow scorn and embarrassing self-recognition, for who hasn’t reveled in getting a bargain (“Breakfast was usually $2 a person, / with bacon”), bragged about having an authentic experience (“i should know / i grew up there”), or used, and probably overused, that ever-so-innocuous word “great.”