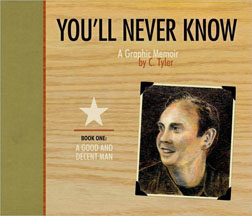 Book One: A Good and Decent Man

Refuting Paradise Lost, Virginia Woolf wrote: “The substance of Milton is all made of wonderful, beautiful and masterly descriptions . . . He deals in horror and immensity and squalor and sublimity but never in the passions of the human heart. Has any great poem ever let in so little light upon one’s own joys and sorrows?” One could easily pose a similar question about American comics, which thus far has been mostly a male project dedicated to monumental portraiture. Think of auteurs like Jack Kirby, Rory Hayes, and Fletcher Hanks—all less interested in regular life than in the sublime Other of atavistic godheads and hallucinogenic totems. Similarly, if a non-comics reader were to read P.R. Garriock’sMasters of Comic Book Art, a late 1970s anthology that purports to contain “the work of the ten most influential illustrators of comic book art, from its inception to the present day,” he could be forgiven for assuming the medium to be baroquely architectural in its aesthetics but pre-pubescent in its social content, given Barry Windsor-Smith’s Conan clobbering rain-slick goblin armies, Philippe Druillet’s galactic civilizations jutting in exaggerated three-point perspective, and Richard Corben’s jocose and pudgy cavemen on planets colored a psychedelic magenta.

Almost as a correction, the last few years have seen the rise of graphic narratives made by women who explore the joys and sorrows of daily life, such as Marjane Satrapi’s Persepolis, Alison Bechdel’s Fun Home, and Posy Simmond’s Gemma Bovery. Though less famous than these three artists, Carol Tyler seems more alive in the American comics idiom and more knowing about the interaction between feminism and art creation. Largely focused on the trials of being a single mother in the Midwest—a hectic, sunny world suffused with the tropes of white suburban Americana, such as high school proms, home improvement, yard sales, and World War II medals—her autobiographical comics display a shocking, unruly wholesomeness: they are visually and morally beautiful, suffused with a scrap-doodle amateurism and palpable maternal love, which comes across as livelier than romantic love.

As one might guess from even this cursory description, Tyler’s work could be described as “sentimental” and “decorative.” Feminist critique has foregrounded the sexism of such labels, and Tyler’s work can be read as a model for so-called “minor art,” an aesthetic practice that walks alongside daily life rather than soaring away from it towards a dubious artistic glory. To be a minor artist means to flirt with what a high artist would view as failure—and so Tyler’s work seems dedicated to an earnest and pesky amateurism. Just as minor art ignores the distinction between art and craft, You’ll Never Know, Tyler’s newest book, is modeled on a scrapbook and is a tribute to craftsmanship, much like the home repair and plumbing we see her father, the “good and decent man” of the title, often undertaking.

Tyler’s sincerity sometimes flattens her characters, who feel as “under-characterized” as people in diaries. Tyler mitigates this directness of heart with a dynamically pesky drawing style, splattering each panel with the democratic debris of life. The characters vibrate from their outlines, and the panel corners feel embroidered with homey backtalk (“Holy Toledo!”) and perky footnoting (“My Top 10 Broken Record Phrases”)—all of which crowd the page with a quivering density that recalls Milt Gross, Mad’s Harvey Kurtzman, and a high school student’s energetic scribbles. This tension between the sentimental and the spastic aptly characterizes the state of motherhood, in which a consummately attentive caretaker can become hollowed out into a multi-tasking crisis-solver. Yet her comics also lament their status as minor art and actually offer a stunning critique of motherhood—which she depicts as a cherished, lost state, but also as a rut that makes it impossible to be anything other than a “late bloomer,” the title of Tyler’s previous book.

While Late Bloomer focused on motherhood, You’ll Never Know’s ostensible subject is Tyler’s father and his World War II tour of duty; this gives it a statelier look, each panel accruing a static, wood-grained, WPA-style dignity more akin to an illustrated book than a comic. The book’s deeper subtext is the subtle cruelty of men, whom Tyler depicts as loving but self-absorbed and repressed. Tyler’s husband, who has left her for another woman, is key in this regard, but her father is also depicted as a self-described “ornery bastard” who has been unable to talk forthrightly about the war. And this silence has weighed heavily on Tyler, who imagines Adolf Hitler telling her father, “That your children suffer because I’ve damaged you fills me with pride!”

In this astonishing scene, which takes place in a vivid, multi-page dreamscape, Tyler hints at the monumentality typical of the male artists I mentioned earlier. Yet she instantly lightens the weightiness by having her father call Hitler an “ass” and transform into a raven, the book’s sole non-realist moment. The snowy sky shrinks into Tyler’s window, where she realizes how badly the war and its “rivers of blood” traumatized her father. She tries to tell him this, but he rebuffs her and heads out the door, decked in camouflage and gripping a pistol, his uniform having magically appeared on his body, his face always cropped or turned away in their tortured conversation. Unlike her father, Tyler’s character believes there is always room for conversation to deflate the grandiose scale of war into something human.

Tyler’s choice to push the scene beyond the sublime suggests that so-called “minor” art is actually far more complicated and alive than modernist grandness, which is often a way of avoiding the threatening complexity of psychology. It also reminds us that there is no special zone of meaning or aesthetics that is separate from the cruelty and kindness we inflict upon each other.