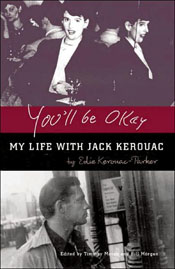 Neither scholarly tome nor critical analysis, Edie Kerouac-Parker’s new memoir is a warm, intimate, and colorful portrait of the embryonic journey of Jack Kerouac, whose seminal novel On the Road celebrates its 50th anniversary this year. You’ll Be Okay is thus a timely contribution to the ongoing reassessment of Kerouac’s role and importance in post-war American literature.

In 1940, at the age of eighteen, Edie Parker left Grosse Point, Michigan and moved to New York, hoping to study art and settle in Manhattan or even Paris, where she could live out the fantasies of Bohemian life that she’d been entertaining for many years. Born into a wealthy upper-class family, Edie grew up surrounded by a life of privilege and prosperity that she began to see as a sort of ghetto, a gilded cage she desperately wished to escape. In New York, by way of a mutual friend named Henri Cru (who became Remi Boncoeur in On the Road), she met Jack Kerouac, also eighteen, and soon became enmeshed in his wide circle of friends. Kerouac was attending Columbia on a football scholarship, already a devoted writer and student of literature. They soon fell in love and moved into an apartment with Joan Adams (future wife of William Burroughs), and the circle of friends widened to include Burroughs, Allen Ginsberg, Lucien Carr, Hal Chase and many others—all key figures in what was later known as the Beat Generation.

Kerouac obtained his seaman’s papers and began shipping out, while Edie got a job as a longshoreman working on the docks. After Lucien Carr stabbed would-be stalker David Kammerer and disposed of his body in the Hudson River, Kerouac was arrested as an accessory to murder, and to facilitate the raising of the bail money from Edie’s family, she and Kerouac needed to get married right away. Upon Kerouac’s release the newlyweds moved in with his parents in Queens, a difficult and trying time for all, but left soon after for Grosse Point, where Kerouac got a job inspecting ball bearings on the night shift and managed to pay back their debt to Edie’s mother. But Kerouac did not fare well in sterile, upper class Grosse Point. Eventually he returned to New York, alone, and caught another ship; from then on the couple began to drift further and further apart, until Edie finally filed papers for an annulment, after barely two years of marriage. Soon after that Kerouac met Neil Cassady, and the rest, as they say, is history.

Edie’s prose in You’ll Be Okay is rich with detail and laced with humor, and her vivid memory of everything from what they ate and drank to what films and musicals they saw make even the well-trod portions of this tale newly engaging. While not providing any startling insights into Kerouac’s character, we do see the young writer—hungry for knowledge and experience, and determined to “make it”—at a critical stage on his way to becoming an important figure in American letters. We also get a detailed picture of life in New York City during the throes of World War II, underpinned with its various privations, strains of patriotism, and the growing conservatism (and paranoia) that would help fuel the oncoming Cold War. All this provides a large and vibrant context in which the development of the Beats is portrayed.

Although Edie married twice again, she lived at home until her mother’s death (when Edie was 57), much as Kerouac lived with his mother until his own death in 1969. Of course it’s tempting to speculate what might have happened had the two of them remained together, or if it even would have been possible, considering their ultimately different natures. As Edie says in her foreword,

Jack Kerouac was the fulfilment and nemesis of my youth. He was not a rebel by nature, but was curious and fascinated by those unlike himself, and could not resist the lure of those temptations. My heart was with him always, but my values ultimately led me back home. I was never able to reconcile the dualities within myself. I never will.

You’ll Be Okay is enhanced with enlightening essays by co-editors Timothy Moran and Bill Morgan; many photographs from Edie’s private collection are included as well. Above all, however, it’s the unique female voice and point of view that gives this memoir its strength and importance in the otherwise male-dominated canon of Beat Literature.