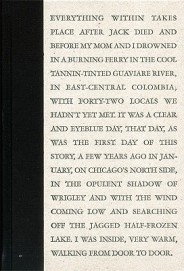 The first thing you'll notice about the dust jacketless You Shall Know Our Velocity is that the opening paragraph is printed on the cover of the book, and continues on the inside without a break. Flipping through the pages, looking for more enticements, you'll be rewarded by tiny color photos slipped in amidst the text, photos taken, for the most part, by the author while he traveled around the world "researching" the book. Okay, I'll admit it sounds a little artsy, but somehow it works—there's a rich story here, and anyway a little art never killed anybody.

Beneath the shenanigans, Dave Eggers' second book is a road novel, plain and simple, and with a weak-sounding premise at that: A man falls into more money then he thought he'd ever have at one time; he's only loosely earned it and is overwhelmed with guilt about having it, so he does what anybody would do: he takes a one week trip around the world with his obnoxious best friend, stopping in as many poor countries as possible to give the money away to the natives. Hi-jinks follow, of course. In the wrong hands this would be a painful short story, so imagine it as a 371-page novel. But Eggers has a flair for taking simple ideas and making them sound so important that you cannot help but believe in them—or at least believe that the characters believe in them:

We stood outside in the cooling black night, and wondered if we could do anything extraordinary. If we could live up to our responsibility here: We had traveled 4,200 miles or whatever and thus were obligated to create something. We had to take the available materials and make something worthy.

How does Eggers pull it off? In a way he lived it. Published by his own McSweeny's Books, You Shall Know Our Velocity is the follow up to his very successful first book, A Heartbreaking Work Of Staggering Genius. A highly personal memoir beneath its antics, Heartbreaking became a phenomenon, one that no doubt enabled Eggers to blow a little money of his own. So he does what anybody would do: he creates an upstart publishing house that distributes unusually inexpensive hardcover books and radically innovative anthology magazines via the Internet, the occasional rock concert, and a few hand-picked, independent book stores, where the literary natives may indeed begin to feel lucky.

The amazing thing is that the business, like the prose, actually works. Eggers understands that you don't need chain bookstores and Amazon-sized websites to be taken seriously. He's managed to mix pop and politics in a perfect way, opening doors that most people never knew were there. In a time when most independent films are released by Disney and scores of indie-rock bands are on Warner Brothers, it's nice to see a young writer taking an ethical stance and being rewarded for it. It's for this reason that only two books in, Dave Eggers may be one of the most important writers of our time.