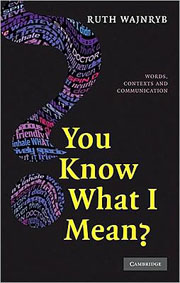 Words are supposed to be solid and reliable, the basic building blocks with which we create structures like sentences, paragraphs, books—and, through these, meaning. This hardly seems like a revelatory thought, but as with many structures, a great deal occurred over time to create the meaning that these very words contain. Ruth Wajnryb’s latest book, You Know What I Mean?, attempts to tackle the oddities of meaning: how certain words and phrases have developed over time, how they behave, what forces dictate the changes in language today, and why we choose the words we do.

Although Wajnryb is generally successful, readers looking for a cohesive whole may be disappointed. Her book comprises ten chapters, each of which tackle a different subject like “Gender,” “Text-types,” or “Word Biographies”; these are divided into even shorter essays that are usually under two pages. For a book 225 pages long, this results in over 100 essays, and in order to tie these essays together, each chapter’s half-page introduction invariably unleashes some variation of the dreaded “This section contains…” Wajnryb’s goal is to demystify various aspects of an often-confusing language, so one can’t really blame her for taking the most direct approach; unfortunately, the elementary introduction doesn’t always set up a flawless demystification, and the brief nature of her essays rarely offers enough space to explain fully the “why” factor she claims to resolve. While sometimes the essays merely end on some witty note or pun, in some instances she actually concedes that there is no explanation—, for example, in terms of reduplicative words (such as “fuddy-duddy,” “heebie-jeebies,” or even “reduplicative” itself) she writes, “I’ve searched but haven’t yet unearthed an explanation. Sometimes, illogically, we just repeat ourselves. Repeat ourselves.” At least she gets the point across.

What Wajnryb does quite well is pique her reader’s interest, maintaining it through contemporary references and the occasional tangent, all with the added bonus of her keen, snarky humor. The American reader will learn a little something about Australian politics and what the Collins Australian Dictionary has to say about the contained definition or origins of a word (she uses the Oxford English Dictionary quite frequently as well). Topics vary from grammar basics (“you” and “me” do not simply refer to me and you), to the linguist’s cringe at poorly worded signs (we’ve all been there), to war words. “Vietnam,” for example, is no longer just a place, it has morphed into an entire concept. She refers to Saddam Hussein on multiple occasions, but also returns to “Dogese” (the conversational tone and level of informality that occurs when dog owners meet and converse briefly while out for a walk with their companions) several times as well. The ephemeral nature of Wajnryb’s plethora of topics is probably best suited for the ephemeral reader (if you can figure that out, you’re ready for the book).

Wajnryb’s readers acquire the ability to think like a linguistic detective, especially after the biographical breakdown (semantic, etymological, grammatical, and pragmatic) of various words in the chapter “Word Biographies.” Her most successful example, exploring “get” in all its applications, is pleasurably enlightening: while some consider the use of “get” as sloppy or lazy (e.g., “get home” or “get dinner” instead of “arrive” and “cook”), Wajnryb praises it for its slippery, infinitely flexible qualities. Think about it: “get the milk,” “get the joke,” “I’ll get you for this,” “get old,” “get to know,” “get going,” “get up,” “get warm,” “get with,” “a good get,” “get to dance,” “get stoned,” and a favorite: “get your elbow out of my face.” There’s no way that “get” has one containable, comprehensive definition. Furthermore, the critic of using “get” assumes that “get dinner” and “cook” are synonymous, but to “go get dinner from the store” is not cooking. It may be as lazy as using “get” in certain situations, but that’s not a matter of linguistics.

Things start to coalesce, ironically of course, in the final chapter, “World Englishes,” in which Wajnryb explores the seemingly infinite varieties and dialects of what she calls EIL—English as an International Language. She tackles the “migrant headache” that one student of English suffers, and how various aspects of other languages continue to permeate and shape English as it evolves, resulting in even more disparate dialects and word variations (thank you, globalization). She even discusses the dissonance encountered between communicative competence and linguistic competence—the difference between “as long as you know what I mean” and that which is grammatically, linguistically correct. Unfortunately she spends little time on this, only pondering it in terms of her Chinese dry-cleaner who also takes care of clothing repair and alteration, who one day told Wajnryb of her black pants, “’He no good. He no work. Zipper kaput.’” What is missing is the increasingly large number of native English speakers who insist that communicative competence is all they need and that things like grammar, punctuation, and anything above a bare-minimum vocabulary is excessive. The more informal the text-types become (blogging, email, SMS messaging), the less space, time, and assumed need there is for such formalities. Whether this creates mere indolence or worse is a fascinating debate—so why does the linguist shy away from this subject?

The best explanation Wajnryb provides in You Know What I Mean?, although it comes in short bits and pieces, lies in why we choose the words we do. Whether through subtlety or directness, brevity or garrulity, the language we use is intentional, even if it has become habitual. This is, of course, not uncomplicated. It is an equation full of variables that include the speaker, audience/receiver(s), mode (face-to-face, formal letter, text message, bumper sticker, obituary, etc.), the topic and its context (including the culture), tone, as well as the receiver’s expectations of what the speaker says and how they say it (including the assumed grammatical rules or deviation from them, expected use or avoidance of clichés, etc.) and the intended purpose/message. No wonder Wajnryb didn’t attempt to spell it out—it’s nearly impossible to do logically. Even a master of the language can’t always explain the mystery behind words.