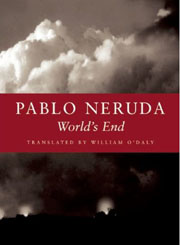 Oh, the lie that we lived
became our daily bread.
What we, lords of the twenty-first
century, did not know
must be known,
must be seen, the dissent and the why,
because we did not see,
so that no one else consumes
the food of lies
that in our time sustained us.

Looking back at the twentieth century, “the age of ashes,” Pablo Neruda wrote a reflective book-length poem, World’s End. Though he actually composed this book in 1968 and ’69, and went on to write fourteen more books of poetry, World’s End feels as if it were his last.

No doubt the tone of weariness and disappointment comes from the tallying of both personal mistakes and the bloody events of the “ceaseless” century. His personal failings remain for the most part oblique, but he names the horrors of the epoch—the Spanish Civil War, the atomic bombing of Hiroshima and Nagasaki, the Vietnam War. He also reflects on the false prophets of hope—Hitler, Mao, and Stalin—trying again and again to exorcize these historical demons in the 113 poems that compose this book.

The demon that gives him the most trouble is Josef Stalin. While Neruda never fell under the spell of Hitler or Mao, he was a longtime supporter of Stalin, and won the Stalin Peace Prize. As late as 1953, when Stalin died, Neruda composed an ode for him. No doubt this was partly due to Neruda’s belief that Communism provided hope for those capitalism often exploits—the working people who often appear in Neruda’s poetry. While many broke with Stalin in the 1930s, it wasn’t until “The Worship (II),” inWorld’s End, that Neruda did so:

It was the proliferation
of that steely portrait
that incubated the excesses.

We celebrate the hard brow,
not seeing it was sizing us up—
beneath those Georgian eyebrows,
the testing eyes of the monarch,
the geology of terror.

Neruda reminds us, through his use of the first person plural, how many millions were likewise entranced by the strong man from Georgia, perhaps in an attempt to excuse his own misplaced trust. Much more controversial is a phrase that comes earlier in this poem, one that contradicts the very nature of this book: “it is better to forget /so as to sustain hope.” This from the writer who recalls, in poem after poem, the worst events of the twentieth century? Or is Neruda simply implying he wishes we (as well as himself) would forget his support of Stalin?

Those who admire Neruda will no doubt place emphasis on the last words in this ambiguous phrase: “to sustain hope.” In fact, World’s End can be read as a struggle between facing the truth of what humans have wrought and sustaining hope that we can do much better. As Stalin fell in both categories for Neruda, he stumbled. Octavio Paz, the acclaimed Mexican poet, clearly admired Neruda and yet wrote scathingly of him and others who supported Stalin: “No doubt they began in good faith . . . But insensibly, commitment by commitment, they saw themselves in a mesh of lies, falsehoods, deceits and perjuries, until they lost their souls.” A harsh statement, one that reflects how divisive Neruda’s Stalinist sympathies were.

I died with every death;
so I was able to live again
bound by my testimony
and by my unyielding hope.

In these lines that sound as if they could be his epitaph, Neruda reveals his awareness of history, his empathy for those who suffered due to it, his use of poetry to document history, and his refusal to give up hope.

If Neruda finally acknowledges Stalin as a false prophet in this book, then Che Guevara and Fidel Castro, as well as Cuba, provide cause for celebration. Neruda unabashedly praises all three as beacons of hope. In “Sadness at the Death of a Hero,” Neruda recounts the inglorious death of Guevara in the jungles of Bolivia:

The commander ended up
assassinated in a ravine.
No one said this mouth is mine.
No one wept in the indian villages.
No one climbed the bell towers.
No one raised their rifles,
and the reward was claimed
by those whose rescue was the aim
of the assassinated comandante.

As Guevara continues to be lionized today, Neruda’s sympathies here will not be a surprise, nor trouble many. Not so with Neruda’s treatment of Castro: “Fidel roared / with indisputable grandeur . . .” To say that Neruda, along with many in Latin America, admire Castro for bravely defying the United States for over five decades, as well as for creating a better standard of living than under capitalism, will not sway all. Such are the dangers of the political poet.

While Neruda’s politics may at times alienate some readers, his compassion—the root of his politics and poetry—reveals why he was able to fill a stadium with 100,000 fans, and why so many continue to read and regard him with affection. Whether it’s his sense of connection to the natural world, or his enduring belief in the people, Neruda, like Whitman, is a poet who can embody multitudes, and contradictions. Here, in “Ars Poetica (I),” he describes his poetics:

As a poet-baker
I prepare the fire, the flour,
the leavening, the heart,
and I, involved up to the elbows,
kneading the light of the oven,
the green water of language,
so the bread that happens to me
sells itself in the bakery.

Some might wish to ask Neruda, What if you can’t afford to buy this bread? Doesn’t this contradict your political beliefs? Yet how many contemporary American poets could we claim are likewise “involved up to the elbows” in preparing poetry that feeds readers? How many would want to be?

World’s End, the ninth and final book of Neruda’s “late and posthumous” poetry translated by William O’Daly, does not pulse with the imaginative energy of Neruda’s best work: Twenty Love Poems and a Song of Despair, Residence on Earth, The Heights of Macchu Picchu, and many of his “elemental odes.” Those who have yet to explore Neruda’s poetry would want to begin with these books; those already familiar with Neruda might want to read this book as a complement to his much more exuberant Memoirs. While World’s End is not Neruda at his best, O’Daly deserves praise for his dedication and care in translating Neruda.

To illustrate O’Daly’s skill, it’s worth examining New Poems (1968-1970), published by Grove Press in 1972, in which Ben Belitt offered his translations of selections from World’s End (which O’Daly has completely translated). Here is Belitt’s version of a stanza from “Foundations”:

First I kept to the roots,
then I learned from the foliage
how to fly higher, little by little,
looking for apples and birds.
To this day I should live in a cage
and dress up in feathers,
having spent all my childhood
strolling from one branch to the next.

And here is O’Daly’s translation of the same stanza:

I first lived in the root,
then among leaves I learned
little by little to fly higher
in search of birds and apples.
I don’t know why I don’t live in a cage,
or why I go about dressed in a feather duster
when I spent my whole childhood
hopping from branch to branch.

O’Daly makes the shrewder decisions: with the imagery (“lived” vs. “kept to”), the musicality (“leaves I learned / little by little”), the playfulness (“dressed in a feather duster”), and the verb choice (“hopping” vs. “strolling”). O’Daly further instills confidence by providing the Spanish in this bilingual edition.

Though World’s End provides only glimpses of Neruda’s greatness as a poet, it’s a fitting end to the Neruda / O’Daly series. What better way to close the project than with the one-line poem, entitled “Goodbye,” that ends this book: “Earth, I kiss you, and say goodbye.”