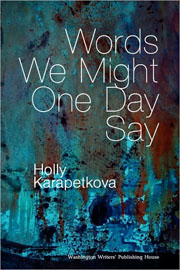 Holly Karapetkova’s haunting debut collection tells of her experiences as lover, mother, and as a child growing up in war-torn Bulgaria. With a narrative sewn together by the poet into sections thematically centered on lovers, family, suicide, and home, Words We Might One Day Say hinges on the unsaid, as the speaker tries to clarify her own complex history.

Lost loves never completely disappear, even after they leave. In “Lessons in Kindness,” each stanza builds to a larger presence the speaker brings into her life then pushes away. The poem begins with ladybugs she allows in her house, until she sees “one piss on my toothbrush, I lost my cool, / began to slaughter them by the handful”. The speaker also “sleep[s] with men / for meals” in “That Kind” but never takes “eggs or avocados. / Never things that can be counted”. Seeing broad loaves filling a grocery store, she marvels at American excess in “For My American Lover, Upon My Leaving,” claiming that he “wouldn’t understand the phrase too much, / but I had learned to live with hunger”.

Karapetkova always returns to her native Bulgaria, documenting the changes brought by Westernization. She describes topless beaches in “Democracy Comes to the Black Sea”: “Now we sit / and burn, naked to the world, finding nothing: / not freedom, not release, only the sun’s heat”. She reflects on family, when, after her grandmother’s death, her grandfather takes a dog as his companion in “Grandfather and Dog.” As the dog dies, the speaker knows that “he could not go on alone— / the hole I stood by six months later was his own”. Loss always remains a central to the speaker, becoming a familiar presence.

The dead permeate the collection. Karapetkova begins the book’s second section with “Letter in Response to a Friend’s Suicide Note.” The speaker begs of her friend:

I want to say keep the pen pressed to the page
until the hotel walls fade and you find yourself
out amid the warm night air. Come closer,
tell us more, tell us why we love.

The speaker contemplates the fate of suicides and speculates on when she, too, thought of suicide. In doing so, she turns toward natural imagery, as in “The One That Got Away,” which imagines one lost as a wild deer “running straight into the sunlight of the interstate, / refusing to stop / for the pavement”.

The final section ends with the speaker’s contemplation on motherhood. She worries for her child in “How the Earth Lost Its Moon,” lamenting “This is before he knows anything / of sonatas or poetry / of seduction or pain”. Holding nothing back, Karapetkova’s poems resonate with a bare honesty and continuing need for love.