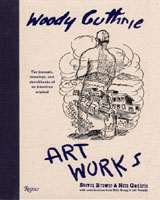 Woody Guthrie's visual art may have originated in the same place and time as the music that made him famous: Shorty Harris's drug store in Pampa, Texas, circa 1929. Between intermittent shifts as a soda jerk, the 17-year-old Guthrie painted murals of desserts and wintry mountain landscapes in watercolors on the front windows of the store, and discovered in the back room an abandoned, rusty-stringed guitar. The former, Guthrie believed, would be his meal ticket when he left Pampa for California in 1937. The latter would help him create one of the most durable archetypes of 20th Century America.

Guthrie is so permanently linked in the popular imagination with the folksongs he authored that it's easy to forget his apparently boundless creative energies were not—and probably could not have been—confined to a single discipline. He never considered himself to be strictly a songwriter, embracing instead the idea of the folksy polymath embodied by one of his earliest heroes, the singing cowboy Will Rogers. Before Huntington's disease halted his prolific artistic output, Guthrie had been not just a songwriter but a socialist newspaper columnist, a well-received novelist, a radio personality, a modern dance accompanist, and the creator of countless works of visual art, ranging from political cartoons to watercolor portraits to bizarre backyard found-object sculptures.

Nora Guthrie (Guthrie's daughter and director of the Woody Guthrie Archives) and Steven Brower (a graphic artist and writer) make an extensive argument for the importance Guthrie's visual output in Woody Guthrie Artworks, a lovingly assembled volume of some 300 Guthrie drawings and paintings. These run the gamut from a studious 1937 oil painting of Abraham Lincoln to haunting 1951 watercolors of lynchings in rural Florida, and they demonstrate, as Brower says in his accomplished introductory essay, "surprising depth, variety, and a highly refined understanding of composition and expression."

It is true that Guthrie possessed an understanding of and interest in highbrow artistic pursuits, though he took considerable pains to conceal it. Ed Cray's 2004 biography Ramblin' Man amply illustrates that behind the self-styled Dust Bowl hobo poet was an avid intellectual who rubbed elbows with Jackson Pollack and Willem de Kooning in the bohemian Greenwich Village of the early '40s, enjoyed John Cage's piano music, and was married to one of Martha Graham's dancers, Marjorie Mazia Guthrie, for a large portion of his adult life.

His wide-ranging interests notwithstanding, Guthrie's greatest gift was his ear for language, and his paint and ink endeavors pale in comparison to his poetry and prose. While the pieces collected in Woody Guthrie Artworks are often striking, none of them compare to his Dust Bowl ballads or his self-described "autobiographical novel" Bound for Glory, a prose work that reads like the literary missing link betweenThe Grapes of Wrath (Steinbeck was a friend and mutual admirer) and On the Road. As a writer, Guthrie was capable of rendering even throwaway sentences indelibly his own, bristling with invented words and lyrical cadence; in his posthumous novel Seeds of Man, he offhandedly describes the flora of Pecos County, Texas as "sandy cactus of every kind, slim and long, fat and thick, wide and low, high and skinny, curly, twisty, knotty, stickery, thorny, daggery-knifed, razor sharp." A cactus observed with similar casualness in the 1943 drawing "Dream" is depicted competently enough, but it's nothing extraordinary.

Woody Guthrie Artworks' revelations are thus more biographical than artistic, and they are most plentiful in Guthrie's later years. When Bob Dylan visited Guthrie in East Orange, New Jersey in the winter of 1961 to collect his torch, his hero hadn't written a song in nine years. The final watercolors in Woody Guthrie Artworks, however, postdate the last of his known songs.

Although Brower presents Guthrie's interest in abstract art as evidence to the contrary, it's hard to see the dominant influence in Guthrie's faceless portraits and spectral forms from 1951-53 as anything other than the artist's deteriorating mental condition. They are often difficult to look at, and under other circumstances, they might raise questions about whether their maker would have wanted them published at all. But Guthrie's true masterpiece was his life itself, and he seemed determined to put as much of it as possible on the public record. In the end, the only thing in this book guaranteed to raise Guthrie's hackles is its price tag.