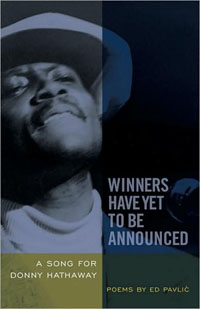 by Michael A. Antonucci

To conclude his 1966 essay “The Changing Same (R&B and the New Black Music),” LeRoi Jones writes, “If you play James Brown. . . in a bank, the total environment is changed.” Jones claims Brown’s music produces “an energy” and “summoning of images” that takes “the bank, and everybody in it, on a trip. That is, they visit another place. A place where Black people live.” Similarly, in Winners Have Yet to be Announced, poet Ed Pavlić takes his readers “on a trip.” Written as a response to the music of singer/songwriter Donny Hathaway, Pavlić’s third volume of poetry sketches Hathaway’s life and career through a series of prose poems that situates the musician and his work within the Black music continuum; Winners also offers an account of Hathaway’s personal and artistic struggles, which culminated in the dramatic circumstances surrounding his death in January 1979. Fusing poetry and biography, Pavlić’s work succeeds in surveying points of intersection between Black life, Black music and the “place[s] where Black people live.”

A composer, arranger, pianist, and vocalist, Donny Hathaway gained a reputation as a musical innovator and resourceful improviser. Hathaway’s singular talents become evident as the music he produced reconfigured various Black music environments. Fully exploring the possibilities of those musical spaces marked “R&B,” “gospel,” “soul,” “jazz,” Hathaway entered these territories and moved between them (listen to Everything is Everything and hear him turn Errol Gardiner’s “Misty” inside out; follow the call and response, stacked horns and layered vocals of “I Hear Voices;” trace the high arcs in his live, recorded rendering of “He Ain’t Heavy, He’s My Brother”). For this reason, in the course of making the transition from legendary session man and studio musician to Grammy-winning recording artist, Hathaway came to carry the label “genius.” Accounting for his music’s blues nuanced grooves— the digging, shifting, movements in color and form— Hathaway explained, “ I am in the process of expanding and developing styles. I love music, period.”

Winners locates this love for music and conveys a sense of the brilliant urgency that informed Hathaway’s creative process. Pavlić describes his project as “an attempt to translate into print what happens in the quality and tone of Donny Hathaway’s singing voice.” Subtitled “a song for Donny Hathaway,” the book collects and arranges imagined conversations, interview materials, and an intensive set of “listening notes.” This approach becomes especially evident in “Listening Notes: Mercy Medical Psychiatric: January 13,1973: Chicago, IL,” the second of the six poetic sequences (or “tracks”) that compriseWinners. With these lines, Pavlić offers a poetic translation of Hathaway’s music. The third section of “Mercy,” for example, begins with a description of his sound as, “an open tone in the ache that connects your hands and feet and fingers.” The poem continues as Pavlić writes, “Like the volume of a dream. Immense, full. It’s never loud. It’s how a sound fills a submerged structure. Underwater bridge.” After identifying the specific qualities of Hathaway’s vocal stylings and instrumental configurations in this way, the poet brings attention to the movement he understands as central to Hathaway’s musical project. In the fourth section of “Mercy” Pavlić’s speaker states,

Cause, of course, if you’re not carefully anchored, a sound can carry
you with it. Then where are you? Truth is you don’t know. How many
times have you heard a song and been transported into a scene. A
place. Not the memory of a place, man, it’s a volume you’ve entered.

Entering this “place,” which he calls “a deep listener’s alibi,” the poet locates the space Hathaway conjures and contact in his music. As such, Pavlić’s poetic sketch of Hathaway’s soundscape reveals a set of profound, localized memories— both real and imagined. Presenting his readers with a “puddle with no bottom,” the poet charts this terrain, making it as familiar as it is disconcerting, and thereby offering one more variation on Baraka’s “changing same.”

Tracing the movements within Hathaway’s music, Winners marks numerous points of convergence linking Black life and Black music. In this respect Pavlić’s verse identifies sites drawn from an interior geography that stretches from the Carr Square housing projects in St. Louis to the piano player’s strong left hand. His poems measure distances and gauge sources that resonate with the words of James Baldwin and the blue notes of Curtis Mayfield. Their lines travel along these frequencies— from churches and nightclubs on Chicago’s Southside, along Hathaway’s imagined discussions with Einstein, Cezanne and Debussy. As such Pavlić’s Hathaway becomes in blazing pathways, seeking transcendent space, and singing at the intersection of Nation, Soul and Music. Winners capture this powerful dynamic in the voice of a stockyard worker who relates his encounters with Hathaway’s music in “Interview: Grave Yard Shift.” He states, “Simple as that. It was black life. I ain’t no philosopher. He sung you / a black man’s life. You knew cause you’d lived it. You’d even sung it / yourself.” Pavlić’s poem continues and the stockyard worker goes on to explain, “So, that’s what I heard. I sat there high as a kite and watched that/ stocky brother sit at the piano and stare my life down. He opened/ his mouth and what came out was things none of us looked at. Life.”

Pavlić’s stockyard worker concludes this “interview” by speculating, “As for Mr. Hathaway, leave it up to the radio, watch. / They’ll make a Christmas singer out of him. They’ll have my man / coming down the chimney. Sugar Plums.” His comments echo and confirm thoughts delivered by Pablo “Yoruba” Guzman in his obituary of Hathaway from the Village Voice. Published shortly after the musician fell to his death from a window in the Essex House hotel in New York, Guzman also suggests that Hathaway and his music were vulnerable to exploitation by the recording industry. While considering “Where is the Love?”— the hit recording Hathaway had collaborating with Roberta Flack, which remains his most widely recognized work— Guzman writes, “Perceived on its own, the “Where Is the Love?”. . . might be a pretty thing to look at. But since it exists as part of the total music flow, anyone who felt uneasy about the song in 1972 was dead on target, as it represented [an] insidious creeping Vegasism.”

Increasingly, the strains of the music business took a toll on Hathaway, as both an artist and as an individual. Pavlić’s poetry provides a set of insights into the turmoil that accompanied Hathaway as he worked in the aura of success. Winners thereby serves as both a poetic sketch of one musician’s attempt to articulate a complex aesthetic vision and an examination of audience conventions and production expectations that confront Black musicians. In an interview with the Washington Post after the death of her singing partner, Roberta Flack addressed a question about the tensions Hathaway experienced personally and professionally by stating, “There are a lot of us who are black musicians and who are trained and move away from black naturalness. Donny was not interested in crossing over, under or beyond. He had that natural thing.” Significantly, the poetry in Pavlić’s Winners regards “that natural thing” as a deeply grown, blues-rooted, aesthetic informed by both African-American experience in the United States and the movements of Black people through the course of a greater African diaspora. In this way, Pavlić’s poetry recalibrates the critical apparatus for evaluating the apparent incongruencies of Hathaway’s body of work. It brings consideration to this musician’s varied musical ambitions and identity, and establishes a framework for evaluating the range and depth of his work—from his days as Little Donny Pitts, “the Nation’s Youngest Gospel Singer,” to the recording he made of Carole King’s “You Got a Friend” with Roberta Flack, to his performance of “Theme for the Television Show Maude" at the Newport Jazz Festival in 1973.

Pavlić’s investment in this project becomes fully evident in Winners’ opening poem, “Interview: Cause of Death: A Sound or Something Like It.” Throughout this poem an unnamed former band-mate of Hathaway’s recalls a wide-ranging conversation between himself and Hathaway concerning musical composition theory and movement of culture. He recalls Hathaway referencing 17th-Century composer Claudio Monteverdi, the Medici family fortune, Turkish floral patterns, James Baldwin, and Pope Pius II to relate a theory of modern music’s construction. Ultimately, however, the poem’s speaker goes on to describe the nature of their collaborations on stage and in the studio as follows: “He’d pound a cord, hold the pedal, press / his left hand into that big, meaty thigh and act like he’s really letting / loose. All the time his eyes on you like they’re staring through barbed / wire. A smile inverted, augmented, seventh slid up and diminished.” Pavlić’s speaker in “Interview” continues,

You can see it now if you want to, see if I’m lying. Take a good look,
hell, take half a one-eyed look, at the cover of Everything is Everything.
You call that a smile? Just another go-lucky day with the kids, right?
Right. Happy day in the new Black nation, right? Morning in the
homeland of the soul. Right? Show him what he’s won, Bob.

“Interview: Cause of Death,” Winners’ longest “track,” concludes as the poem’s speaker recounts how Hathaway punctuated a point about Black music. He remembers Hathaway repeatedly striking a chord and asking, “They’ll say there’s more to it than that, than this. . . They’re right. So, why the act, you know, as if there’s so / damned much less to it than us?” Through the course of the five poetic series that follow “Interview,” Pavlić explores Hathaway’s question, locating multiple dimensions within it. In this way, Pavlić’s volume contributes to conversations concerning Black music and African-American experience. Similarly, the formal choices he makes in Winners also blur boundaries, redrawing the limits of prose poetry and creative non-fiction. Pavlić thereby provides a measure of poetic insight into the “environments” and “energies” of both Black music and Black life as he charts movements of the “changing same.”