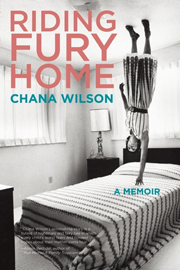 “Maybe if I loved her enough, my mother would heal,” the young Karen (later Chana) Wilson thinks to herself after a visit to the mental hospital. It’s two years and countless electroshock treatments before Gloria is discharged and returns home to her husband and daughter. Not long after, Wilson’s father, the source of stability in her life, leaves the family to spend a research year abroad. In a role reversal that will prove a recurring theme for the remainder of Gloria’s life, the fifth-grade daughter is now largely responsible for her mother’s health and safety, seeing that she doesn’t burn the house down while smoking in bed sedated with sleeping pills. The toll this takes is enormous:

There is a phrase I clearly remember telling myself in my childhood, repeating it like a mantra, a vow, a motto: “I am so strong, I can get through anything.” I had no idea of the cost of such survival, the suppressed longings, the anxiety that became like a second skin. The alternative, to not cope, to possibly let my mother die, was too terrifying.
. . . It wasn’t until adulthood that the immensity of the desertion occurred to me. My mother had left me, a ten-year-old, alone in a house in the middle of the night in the middle of the winter and jumped into the icy Millstone River. She left no note, not even the barest goodbye. Did my mother even think of me as she plunged herself into a cold death, or was her despair so great it overshadowed all other thoughts?

Over her remaining school years, Wilson will see her mother through several suicide attempts. The whole time, her condition remains largely a mystery. When Wilson leaves for college halfway across the country, she does so knowing that if her mother makes another suicide attempt, there will be no one there for her.

The narrative takes a turn when Wilson lands at Grinnell, as she finally has the time and space to attend to some of her own developmental needs. She becomes involved in theater and politics and art, which interest her more than her coursework. Her painful stumblings through the college-dating scene reveal what today would be shocking naïveté. Some of this is due to the repressive sexual attitudes (especially for women) of the early ’60s, and some of it to the author’s low self-confidence. When she and a friend drop out after freshman year and move to San Francisco, it’s no surprise that she quickly joins the feminist movement. “Suddenly, I found myself immersed, gobbling the feminist analysis of the cultural myths we’d all been raised with. And then—bang! —I was thunderstruck. Here was my life, my experiences given name:women’s oppression, patriarchy, male chauvinism.” The men in her life have been selfish disappointments, but women have valuable knowledge to impart: “My God, this is why fucking had been so uninspiring—I had a clitoris!”

When Wilson comes out to her mother, the two parts of the book join in a neat synthesis: after brief discouragement on the grounds that lesbianism will make her daughter’s life difficult, Gloria herself comes out. She’s been a closeted lesbian for years, and it was for “treatment” of her condition that she was institutionalized and shocked and drugged when Wilson was a child. Her psychosis is long gone when she joins a thriving New York lesbian scene. Mother and daughter are supportive and encouraging friends to each other in these exciting years, but Gloria’s dependency returns. She joins Wilson in San Francisco and becomes an occasional drag on her daughter’s relationships. As age and illness beset Gloria, the old caregiving dynamic reasserts itself. The difference now is that Wilson—thanks in part to Dana, her wife—has gained confidence and maturity (as well as age) and can relate to her mother with love and maturity.

As the book proceeds, it becomes increasingly clear how unorthodox this memoir is. Instead of relating defining events from the author’s life in order to articulate an aspect of her mature self, the events serve to elucidate the differences between the lives of author and mother. Wilson’s life (her sexual liberation, foremost) becomes a rebuke of the societal wrongs done Gloria and a vindication of her personhood—but Gloria’s life and her suffering amidst an inhospitable political climate are the primary story here. Riding Fury Home, then, is a final gift for a woman who needed so much from a woman who has so much to give.