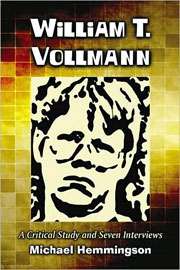 I’ll begin with the negative. The proofreading of William T. Vollmann: A Critical Study and Seven Interviews is shoddy, with words and parts of words dropped, italicization missing, and names misspelled (Blaise Cendrars is rechristened “Blaise Cendrares,” though you won’t find him in the index anyway). Perhaps the publisher issued the book too hastily to coincide with the release of Vollmann’s Imperial, but the National Book Award-winning author deserves much better—especially when one considers how, with his own CoTangent Press, he carefully puts together art books. The errors irritate, and get in the way of the reading. It’s a pity, for as Michael Hemmingson writes in the preface: “This is the first book-length critical work on Vollmann; it is my intention that this study will be the starting point for all Vollmann studies.”

Those faults aside, this is a worthy critical study and interview collection for those both familiar and new to Vollmann’s work. Hemmingson follows his preface with an introduction that provides some biographical details about Vollmann’s life and career, then moves into thematic discussions that link his fiction and nonfiction (though You Bright and Risen Angels and Rising Up and Rising Down get separate chapters). The Seven Dreams fictions are summarized concisely, as are Vollmann’s most recent works,Poor People (2007), Riding Toward Everywhere (2008), and Imperial (2009). Hemmingson is throwing a net at a very fast-moving and productive target. “If you are reading this years after the 2009 publication date,” he writes, “there are most likely half a dozen Vollmann titles not addressed herein.”

It’s not easy to summarize such lengthy and/or complex works, and Hemmingson allows himself only eighty-one pages to do so—making it clearer than ever that the time is well overdue for a collection of essays by various hands on Vollmann’s work, as Hemmingson can only graze the many topics found therein. He sets out the main ones in the heading for Part I (the critical study portion): “Freedom, Redemption, and Prostitution.” There are more to the books than this, of course, and one looks forward to more in-depth examinations of, for instance, Vollmann’s methodology, language, and sentence structures; how pastoral, rural, industrial, and war zones exist side by side in his work; his quest for freedom and apparently careless regard for his own life; how character is developed; what captures his photographer’s eye; class striations; and the reception of his work in different parts of the world.

Part II, “Seven Conversations,” points to some of these topics, although what gets highlighted depends on who is doing the interviewing, and not every conversation is at the same level of intensity. “Moth to the Flame (1991)” with Larry McCaffery is of a high quality, as is “Vollmann Shares Vision (2000)” with Michelle Goldberg; “A Day at Vollmann’s Studio (2007)” with Terri Saul explores his art objects, thoughts on painting, and other less-visited terrain, and is enjoyable for this novelty. Naturally there is some repetition, particularly about his early books, but having these pieces assembled in one place is useful, and Hemmingson has chosen well.

In “The Subversive Dialogues (2006),” an amusing interview, Vollmann tells Kate Braverman “The New York Times tends to not like my work. Their reviews can be scathing. I get good reviews in Europe.” True to their history, Times reviewer Lawrence Downes declared in July that Imperial is “a vast, forbidding, monotonous, sprawling book” for one reason: “The problem isn’t the subject; it’s the author.” The problem may be this: instead of coloring within established lines, Vollmann is intent on capturing the drip or deluge of his (and others’) notions, fantasies, realities, and the factual and fictional aspects of anything he looks into. Life and art are messy. This “little corner that he can mark with his own piss,” as he describes part of his career in “Moth to the Flame,” is his alone, with his own rules.