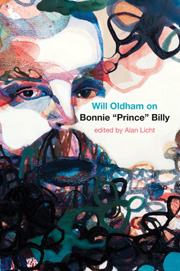 Will Oldham’s past reticence in interviews makes the release of Alan Licht’s book-length interview Will Oldham on Bonnie “Prince” Billy a welcome disclosure. Reading this dialogue it is clear that Oldham has long been ready to converse about his work, as long as it doesn’t manufacture a tiny back room from which it has to be done. His investigation into the creative process will especially appeal to other artists, considering the limitations of the singular perspective is something many artists have reckoned with. This musician transcends it via his larger-than-life lyric persona, Bonnie “Prince” Billy, who warrants a biography of his own.

Licht has the advantage over other interviewers in that he’s a musician who played with Oldham as an opening act and band member for a few New York concerts, and on the 2003 recordingMaster and Everyone. He is also versed in indie rock lore and able to make such connections as linking the “synth at the end of ‘Grand Dark Feeling of Emptiness’” to the 1972 instrumental hit “Popcorn.” In this way, the volume is a hipster’s reference, charting an underground movement that Oldham both navigated and shaped. Lichtʼs understanding of this influence may have earned him Oldham’s trust in talking openly and at length to set the record of his records straight.

It could also be Licht’s background in film that generates their conversational dynamic. Oldham originally trained to be an actor and is often first recognized for his role in John Sayles’sMatewan. When the pair met in the early 1990s, Licht was working for Kino International, a foreign- and independent-film distributor that later released Old Joy, a Kelly Reichardt film in which Oldham stars.

Oldhamʼs dramatic background informs his understanding of performance as separate from the person. He explains his view of working life in terms of actors like Humphrey Bogart, pointing out “there’s no substantial reason to identify a person like him with anything his characters have done.” It thus rankles him that in music, most people assume that the singer/songwriter is the one being expressed in each song. Rather than write within this limitation, he prefers the position of “text personification.” “It’s as if Elvis Presley is a written, created character like Stanley Kowalski,” he says. The idea, he goes on, “is to put forward something someone can have a clean emotional experience with.”

Favorite works of art may lead us to believe we are communing with someone in particular, but the universal must be free to contradict itself and move nimbly between differing subjects and points of view. The need for a flexible vehicle is evidenced in Oldham’s career, which ranges from singing “I See a Darkness” with Johnny Cash to enacting an over-the-top cover of Kanye Westʼs “Canʼt Tell Me Nothing” with Zach Galifianakis. His “alter ego,” as the fifth chapter calls Bonnie “Prince” Billy, enables Oldham to sing the same song one hundred times and to “honestly occupy” it.

Initially, Oldham facilitated his artistic expansion by performing under multiple band names, including Palace and the Palace Brothers. Early albums were filed under both monikers with the instruction to “see also Will Oldham.” The patchwork of compiling his fast-growing oeuvre came together when Bonnie “Prince” Billy was coined on a flight over Australia in 1998. If not for facilitating audience access, Oldham would prefer each album to go unbranded but by its title, like a film. His 1996 album, Arise Therefore, was released sans band name in order that it be met as an experience in itself.

Leave it to the singer/songwriter behind an album called The Letting Go to abandon his identity for each project. “A good record,” he says, “should involve my needs, the listeners’ needs, and the needs of the other people who worked on the record.” If it succeeds in creating a dynamic between multiple, changing band members and genres of music, it cannot be reduced to whatever singular hold fans might put around one man—a man who had to become a prince in order to flee the bonny castles of the set he just stormed.