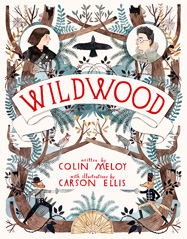 Wildwood tells the story of Prue McKeel, a fiercely independent twelve-year-old living in the St. Johns neighborhood of Portland, Oregon. Early in the book, Prue’s younger brother, Mac, is abducted by a murder of crows and carried into the Impassable Wilderness—a land filled with anthropomorphized animals, a bitter, exiled Governess, a band of outlaw woodsmen, and a nation of talking birds. Before she can save her brother, Prue and her quasi-friend Curtis must first help unknot a massive political stalemate that consumes all of The Wood (the insider-name for the Impassable Wilderness). Along the way, the reader is dropped into a world that Meloy (best known as the front man for the band The Decemberists) and his wife/illustrator Carson Ellis have crafted with considerable care. The narrator’s affection for The Wood is obvious and Ellis’s illustrations always feel tenderly drawn.

Though Meloy often focuses on quaint, Wes Anderson-esque set-design, the book’s true strength lies in its characters. Prue fits into the mold of a classic storybook heroine—she is always ready to take a stand, whether in the complex political dealings of talking birds or against her own parents’ recklessness. Sidekick Curtis is a walking contradiction—like so many boys his age—he’s a self-titled pacifist in one moment and a war hero in the next. The antagonists are similarly vivid and often refreshingly complex: the exiled queen vacillates wildly between charming and ruthless and the various politicos are maddeningly aloof. The leader of a gang of woodsmen named the Bandit King is as vivid and morally ambiguous as his literary antecedent, Robin Hood, and does a nice job ratcheting up the energy whenever he enters the proceedings. As the book hurtles toward the finish line, armies converge, new alliances are drawn, secrets are revealed, and mysteries unfold. Almost all of this hurtling is saved for the last 150 pages of the 541-page book, but dedicated readers who have done a good job retaining information will be gratified by the resolutions and will close the book excited to read Prue’s next adventure in The Wood.

At its best, Wildwood manages to be many things at once: it's a love story for Portland's Forest Park, the immense swath of protected greenery that gives the book its setting; it’s an ode to classic children’s books of the past, from The Lion, the Witch and the Wardrobe to Piers Anthony's Xanth series; and it’s a complex parable full of big ideas (the limits of government, the un-winnable nature of war, etc.) and even bigger words. Wildwood is even a beautiful piece of art, with illustrations, maps, and color plates by Ellis. As love story, ode, parable, and art piece, the book works beautifully. But read as a book for kids, the novel occasionally falters. Meloy’s twee details and focus on politics in Wildwood’s middle section create a pace that might prove frustrating for even precocious child readers. In this same vein, at times the author seems to choose difficult words when simple ones might have done the trick. Unlike M. T. Anderson (Octavian Nothing, The Game of Sunken Places), who uses big words in books for kids but also offers context clues so that young readers can decipher them, Meloy sometimes creates thickets of syllables that are tough to beat through and make the narrator feel a touch pedantic.

Meloy’s language and plotting force the question of Wildwood’s audience—it’s not unreasonable to suppose that the book will be more rabidly devoured by thirty-year-old fans of The Decemberists than by those in Prue’s age group. Yet whether its audience is still in school or looking back on it through a nostalgic lens, The Wildwood Chronicles are bound to gain a following—indeed, the movie rights have been sold and the next two books are on the way. One only hopes that they will show Meloy writing with the same sense of urgency that can be heard in his best songs.