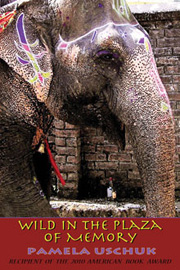 In her new collection’s opening poem, “Ode to Federico Garcia Lorca,” Pamela Uschuk evokes the ghost of the great Andalusian poet in sinuous imagistic lines, calling him to assuage the presence of death that is visiting her:

Federico, when you come to me, the unbearable
longing of trees roots deeper in the sky, flies
among stars like a comet in search
of its dead twin.

Like Lorca, Uschuk is a poet of the duende, that mystical Spanish conception; she views the poem as a vehicle for fierce engagement with the body and its social realities, often with a metaphysical awareness that transcends and extends the corporeal into the natural world. Working a poetics rare for a North American writer, Uschuk has crafted a poetry equally steeped in nature and political resistance. This is an ecological poetics of engagement, a mythic poetry—part Lorca, part Rachel Carson. Her aesthetic shares some landscapes and concerns with other western poets, particularly indigenous poets such as Joy Harjo.

Such poetry is often described as “poetry of witness,” though this can be reductive, because for Uschuk witness can take many forms, even nonhuman ones—such as the elephant she rode who she finds out is named Rose:

What sings between the folds of Rose’s hide
and my thin skin strikes
the cold New York air. Synched from pelvis
to knee to brow to heart, we are
a single chained animal. When she lifts her trunk

trumpeting, a plea stark as a shackle
snapped on a wild ankle, a blaze
consuming our vertebra,
scalds my blood.
(“Elephant Ride, New York”)

Even more praiseworthy, Uschuck’s poems push for a lush language of metaphor; for her, reclaiming and cherishing the beautiful is an antidote against despair:

the way the rain’s soft tongues write
a score of green notes for a world too long
held hostage by the iron-thorned arms
of teen suicide bombers and dictators
who’ve outlived their paralyzed smiles,
love the Afghan farmer plowing under
a warlord’s poppies to plant winter wheat,
love green tomatoes fattening on the porch
(“Green Rain, A Birthday Poem”)

Uschuk’s range in this book is expansive: she tackles issues of immigration along the border, narrates the lives and struggles of old Latino Vietnam veterans, evokes her sister as a Mayan jaguar, laments the war in Afghanistan, and travels to the Himalayas, where she sings the beauty of the natural landscape and praises the struggle of the Tibetan people against the oppression of the Chinese. As with the best political poets, this is all accomplished through relating personal interactions with people she actually knows. Although her fifth book, Wild in the Plaza of Memory will offer readers a stirring introduction to Uschuk’s growing body of work.