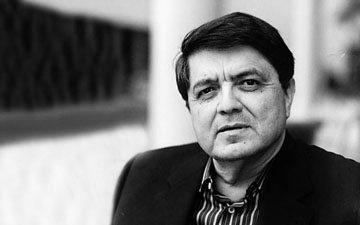 TO BURY OUR FATHERS
A Novel of Nicaragua

This 1977 novel by the former Sandinista Vice President of Nicaragua evokes a world formed, if not deformed, by the same kind of global economic disparities and culture/ideology clashes we still debate. In its original Spanish, the title is a line from a nursery rhyme about a mother's slaughtering a pig: "Were you scared of the blood?" Maybe British translator Nick Caistor considered such a question too much for an English-speaking readership to absorb all at once (after all, ours is the language of colonizers, not of the colonized). But even in translation this novel, despite its scenes of torture, murder, military massacre, prostitution, destitution, and assorted chaos, is a celebration—by turns fond and funny, boisterous and sad—of this volcanic Central American country and its beleaguered people.

Ramírez’s many-faceted depiction takes place during the years when what’s been called the worst dictatorship in all Latin America was being established. Order and authority have been deeply suspect for so long that even a character who would supplant el hombre (the first of the Somoza dynasty that fell, eighteen years after the scope of this book, to the Sandinistas), has moments of doubt: in one of the book’s central events, the kidnapping of a National Guard colonel, one kidnapper drinks too much and asks his co-conspirator, “What will it get us?” The colonel has his own storyline, and provides the only first-person narration in the book—the very structure of which is an indication of the creative freedom Ramírez included among the freedoms his revolution aimed to foster. The six narrative threads are identified by lithograph vignettes (e.g., a man in a cage, another with a guitar, a coffin on a cart); events span generations from 1930 to 1961, according to a Chronology at the end that can be helpful to consult throughout.

The story begins around the time Indio Larios worked for U.S. Marines stationed in Managua (as they’ve been in fact, on and off, ever since a 1913 invasion to defend a presidency that supported U.S. natural-resource interests). Concurrently, a character who becomes Lario’s companion in rebellion witnesses a street protest against a rigged presidential election and, simply for happening upon it, is punished by his father, whose motto is “Always follow the one who’s in command.” In an illustration of the way Ramírez always grounds the political in individual human experience, the boy is made to kneel on dried corn kernels scattered on a floor.

Other instigating events include the colonel’s ambush in a cinema by a rebel named Altamirando (“high-looking”) and, five years later, a John-the-Baptist-style revenge. An early Miss Nicaragua contest is rigged, won by the colonel’s adopted daughter (actually won first in a raffle, we learn in another narrative thread). A failed rebellion within the National Guard, the perpetrators’ flight toward Costa Rica, and other characters’ exiles in Honduras and Guatemala constitute more interconnected plot lines.

Interconnectedness itself—of Latin American affairs and cultures, even of North and South—is one of the book’s recurring themes. It’s seen in a rendition of the Honduran Army’s 1959 attack on Nicaraguan guerrillas near the border at El Chaparral (of which Ramírez himself is a survivor); in a reference to the fall of Cuba’s Batista; in names from Tegucigalpa to the Dominican Republic; in cameos by or references to Argentinian tango singer Carlos Gardel, El Salvador’s flying Yolanda, and Mexican singer/songwriter Agustin Lara; and in the names Indo Larios gives his children: Bardo Ruben Darío and Heroína Rafaela Herrera (the great Nicaraguan poet and the 19th-century patriot, respectively) as well as Simon Bolívar. U.S. references are often ominous or resentful, like the “green slime obscuring the US Marine uniform” on a skeleton hanging from a jungle branch, or the ubiquitous “Yankees.” But one character’s scheme to sell monkeys from the Mosquito Coast to laboratories in New Orleans, which reputedly use the testicles to manufacture a kind of pre-Viagra, and details like papers stashed in a Quaker Oats box and what’s playing at the Orion theater (The Bridge Over the River Kwai), are more complex. In an early attempt to please his employers, Indio Larios organizes a dance for officers’ daughters that, in its funny and poignant preparations and eventual disaster, becomes a humiliation that contributes to his political change: again, ideologies are rooted in individual experience in this wise book.

Wise too because, while the high spirits of such episodes are at the forefront of the reading experience, everything has at least two sides, often opposite ones. The kidnappers hold Col. Catalino Lopez in a Guatemalan brothel order to exact a paradoxical revenge, getting him drunk and sending him off to fail at sex; suicide threats by a young woman working there take on, in her own tearful account, the fuller perspective of her mother’s reaction: “she takes the blunt knife she has been chopping onions with . . . as though she’s offering me a sweet . . . shouting at me that it’s a good idea, I ought to go ahead and kill myself.” And the personal motives behind the overtly political events, like the kidnapping itself, remind us that politics is at its core about people, or should be.

Of course it’s local, too, and Ramírez’s evocation of place is joyous. Nicaragua is rendered with the familiarity of a local giving directions: San Juan del Norte, Puerto Cabezas, Quinta Niña, Campo Bruce, Malacatoya, Xlolotlán. The names of native trees alone make a happy scat: quelite, jalacate, tiguilote, guanacaste. Characters debate the legacies of songwriter/trumpeter Gaston Perez, José de la Cruz Mena, and baseball players like Chino Melendez, Stanley Cayasso, and others. Some names are dropped in conversation between kidnappers and kidnappee, some from characters through whose talk over bottle-cap checkers in a Managua tavern (Pepsi for black, Spur for white) we get many of the book’s central events, in narratives within narratives that sometimes read the way a Robert Altman film sounds.

But counterpoint between scene and flashback, fact and fiction makes this wild world more familiar as we read, and Ramirez’s balanced characters make it real. Indio Larios and Col. Lopez are forever at odds, but since an episode when Indio’s wily acumen saved Lopez’s honor and military career, they’re forever emotionally interdependent as well. Ramírez seems to favor neither over the other. Indio’s revolutionary feats make him so famous that when Simon Bolívar sends a telegram requesting permission to re-enter Nicaragua with his father’s body for burial, the operator, reading the name, says, “So he’s back at last.” But when the son, who never knew his father and has suffered under his pompous first name all his life, leafs through the papers his father’s left him, what he sees is "grandly headed writing paper" from "exiles' committees which constantly changed their names," and he scatters them to the wind.

That gives us a glimpse not of the author’s cynicism (Ramírez wrote this novel when his own revolutionary idealism must have been at its most hopeful peak, four years before the last Somoza fell) but of his clear-eyed respect for the nuances of truth, as well for as its extremes. The violence here is brutal and spectacular, often to a lyrical degree: rifle butts in mouths, trails of blood, torture by near-drowning, and a father carrying a bowl with “the huge flower” of his bull-gored son’s “bluish-pink intestines,” which, before he gets where he’s going, are “no longer pulsing in the water . . .” It might not all be good, but Ramírez reminds us that it’s all part of life.

Not surprisingly, the extremes of his world are resolved most pleasantly in the mind. “That’s the way it goes,” one character says in the book’s final lines. “At least they left you memories.” But like any good literature, this thirty-year-old novel is a monument to more than the past. Its real subject—exemplified by Indio Larios, who lives out his final days with all his hopes, sins, errors, triumphs, and disappointments boiled down to a capacity for endurance—is the full range of the human spirit, no matter our language, country of origin, or politics.