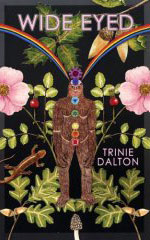 Penned by the likes of Jill McCorkle and Ben Marcus, blurbs for Trinie Dalton’s first book, Wide Eyed, feature phrases such as “wonderfully eccentric” and “wholly unique and memorable.” However, as with many books, there appears to be a “blurb gap” between the content and its characterization on the cover. Wide Eyed’s stories are loose and open forms, but their unorthodoxy is not deep or transgressive. For the most part they are loose collections of anecdotes and observations from what seems to be the same first-person narrator: a young woman in contemporary Los Angeles living a mildly bohemian life. The voice is innocent and jaded, sincere and arch, a pastiche blending The Beatles and Pavement with unicorns, video games, heroin, and slumber parties.

In general the stories don’t follow a particular dramatic arc and often just stop rather than formally conclude. Similar to riff-based jazz, the pieces frequently take a short motif, such as a love of cats or an interest in horror movies, and explore it from several perspectives, weaving in thoughts and images inspired by the motif, until a sort of organic stopping point is reached.

There is humor and energy here, but in the flat tone of someone young and not tremendously reflective, someone who travels in the ocean of pop culture like an Olympic swimmer; the first seven short paragraphs of “Decrepit,” for example, include references to King Kong and Godzilla, Xanax, the New Wave (as in the 1980s), Kruschev, Craftsman style, and the Carter Family. Still, amidst the pop-culture detritus, moments of real pathos and power shine through, especially in the understated scenes involving young girls’ coming of age. Even in the settings most hostile to sentiment, there exists clarity and even an elliptical wisdom: “I think of a reverse chrysalis,” the young female narrator of “Chrysalis” says of watching slasher movies in which teen girls are victims, “like they’re kids who come out of a paradisiacal state only to enter their own personal hell.”

Dalton’s informal prose is interpolated at times with slightly elevated language, along with slang, spoken idioms, shorthand cultural references (that is, references taken for granted as understood), unresolved comparatives (“We were so relieved to see the giant red heart”), indefinite use of definite pronouns, and occasionally, simply infelicitous phrases. At times the writing is like the faux portentous language of many rock and roll lyrics; the first story in the collection features an epigram from the band Pavement: “I’d want a range life / If I could settle down. / If I could settle down, / Then I would settle down.”

The narrator escapes into dreams, and into nature, as frequently as possible. Virtually all of the stories contain items from a stock collection of tropes and images: unicorns, elves, fairies, Santa Claus, mermaids, chivalric legends, cats, dogs, mushrooms, fish, salamanders. Birds and flowers adorn every background, and scenes frequently include the narrator’s musings on fantastic human-animal interactions. Yet at the same time that she ascribes a kind of holiness to creatures great and small, she loves ham and pot roast too, and as a young girl killed her treasured pet hamster in the course of forcing the poor animal to pretend she was a character from a Beatrix Potter story; this last act is described by the adult narrator with more of a sense of surprise than regret. Her love of nature seems, at the least, incompletely considered.

Themes here include male-female relations, pop culture’s role in constructing a world view, female friendships and female coming of age, and, poignantly at times, being alone. For the most part, ideas and themes arise indirectly and elliptically, almost by accident, as the narrator relates anecdote after anecdote and ghostly ideas rise over the scenes and action.

These stories often feel like miniatures or even dioramas. At the same time, the narrator on occasion gets oracular, making pronouncements that can seem unearned in someone so young and skittish about absolutes. Discussing an aunt who kept the secret of the narrator’s late father’s terminal illness at his request, while the narrator and her mother didn’t know about his sickness, the narrator says “she secretly knew he was dying and didn’t do a thing to change it. That’s pretty close to murder.” Such pronouncements typically, as here, end paragraphs or sections like a punch line.

Whether the author is being ironic or this is meant to be taken at face value, Wide Eyed often reads like diary or journal writing, perhaps a reflection of the author’s journalism background. The narrator possesses an unusual voice and sensibility that is infectiously charming, making the book as entertaining—and as potentially ephemeral—as candy. Sorry, blurbers.